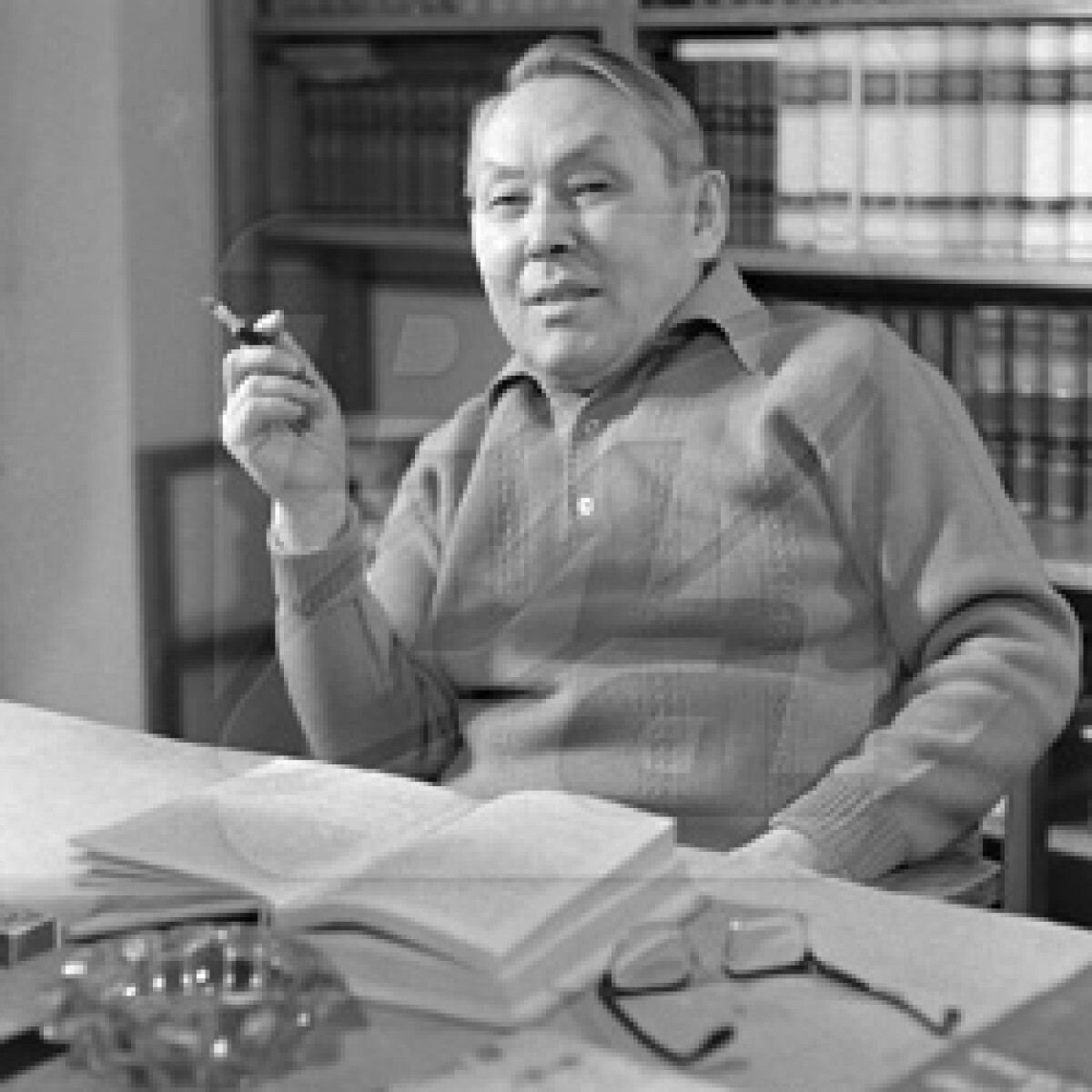 The first steps and possibilities in writing were made by Musrepov during his studies at the rabfak. In those years Musrepov met with S.Seifullin, who had a strong impact on him

March 9, 1902 was born Gabit Musrepov - an outstanding Kazakh writer, statesman and public figure, one of the founders of the national drama, translator, historian, critic, literary critic, academician of the Academy of Sciences of Kazakhstan, Hero of Socialist Labor, laureate of the State Prize of the Kazakh SSR named after Abai, Sh. Valikhanov’s Prize, People's Writer of Kazakhstan, Chairman of the Union of Writers of Kazakhstan.

He was born in the village of Zhanazhol, Presnogorkovsky district, Kostanay region (now Zhambyl district, North-Kazakhstan oblast). Having studied in his native village, in 1916 he entered the Russian two-year school, where he studied for one year, then entered the Russian secondary school, which he graduated in 1921. He graduated from the Orenburg Worker's Faculty, one year worked at the Omsk Agricultural Institute.

In 1958 he was elected secretary of the Union of Writers of the USSR, a member of the State Committee of the USSR for Lenin and State Prizes in the field of literature, art and architecture. His mentor was the famous teacher Beket Otetleulov, who tirelessly repeated that a talented person should have high goals. Later Gabit repeatedly rescued the advice and instructions of his beloved teacher.

The first steps and possibilities in writing were made by Musrepov during his studies at the rabfak. In those years Musrepov met with S.Seifullin, which had a strong influence on him.

The first story - "In the abyss" ("Tulagan Tolkynda") - immediately aroused interest among readers. It was devoted to the theme of the Civil War, told about people who had been tested by revolutionary time, about their struggle for freedom and happiness. Then there were novels and stories "On the Swift Wave", "Kos Shalkar", "Brainless", "Tunnel", "First Steps" and a cycle of short stories about the woman-mother. Simultaneously G.Musrepov begins to write plays.

Later the events of social and cultural life of the country became the main theme of his literary work. G.Musrepov's stories and plays, novels and novelettes, which contributed to the development of national literature, displayed significant events in all spheres of life, social changes in the Kazakh society, new phenomena in everyday life and psychology of the Kazakh people.

G. Musrepov is one of the founders of the national drama. His first experience - the musical drama "Kyz-Zhibek" - was written based on the folk lyric poem of the same name. Later on the basis of this drama Musrepov wrote the libretto of the opera "Kyz-Zhibek". Music was written by an outstanding composer Yevgeny Brusilovsky, and incomparable Kulyash Baiseitova performed the main role. The poetic word of the writer, the lyrical melodies of the composer and the silvery voice of the singer have merged together. Thus the work was born, which entered the treasury of Soviet theater art.

Actively he worked in the field of film drama. Back in 1936, in co-authorship with Vsevolod Ivanov and Beimbet Maylin, the script for the first Kazakh film "Amangeldy" was written. In 1954, under the scenario of Musrepov, the Almaty film studio shot a feature film "Poem about love", and in 1971 on Kazakhfilm, a two-part film "Kyz-Zhibek" was shot in his script, in 1977 - "Once and for all life".

G.Musrepov is also the author of such large literary works as "Amangeldy" (1935), "Kozy Korpesh - Bayan Sulu" (1939), "Soldier from Kazakhstan" (1945), "Akan seri - Aktokty", “The image that was not found” (1966, the State Prize of the Kazakh SSR, 1968) "The Tragedy of the Poet" (about the famous folk singer Akhan-sere, sung in Zhansugurov's poem "Kulager") "Mayra", "Testament to descendants", dozens of short stories and novellas.

The novel "Soldier from Kazakhstan" has gained worldwide fame and glorified Kazakh literature. The historical novel “The Awakened Land” received great popularity. Its continuation - the novel "In the power of strangers" - was written in 1974. In 1968, a collection of his stories and novels "Once and for all life" was published, for which the writer was awarded the State Prize of the Kazakh SSR named after Abai in 1970. In 1976, the novel "Ulpan is her name" was published.

Gabit Musrepov is the author of literary criticism and journalistic works, many of which were included in the collections: "The Artist's Duty", awarded the Sh. Valikhanov’s Prize in 1977, "The Epoch and Literature", "The Features of the Epoch", "Traces of Time". G. Musrepov is a well-known public figure who has invested much effort in expanding and strengthening the literary ties of the countries of Asia and Africa, propaganda of national literature.

He studied the problems of the development of modern literature, especially the language of fiction and the skill of writers. His eyes were turned to the tradition of Abai, the creative experience of the eastern, western and Russian classics.

He took part in the creation of a two-volume "History of the Kazakh Theater", a five-volume "History of the Kazakh SSR" (From ancient times to the present day), and a six-volume "History of Kazakh Literature". G. Musrepov translated works of O. Henry, S. Tagarao, M. Gorky, M. Sholokhov, W. Shakespeare, K. Simonov, A. Shtein, J. Moliere and others into the Kazakh language. G.Musrepov is one of the authors of the Letter of the Five. He is the author of textbooks and books on literature. He took an active part in the socio-political life of the republic and the former USSR. He was repeatedly elected to the Supreme Soviet of the USSR and the Kazakh SSR. In Kazakh literature G. Musrepov occupies a special place: the huge literary heritage left by him became the pride of the national literature. He was awarded three Orders of Lenin, two Orders of the Red Banner of Labor, the Order of Friendship of Peoples, the October Revolution and medals.

In 1974 he was awarded the title of honorary citizen of Petropavlovsk. One of the streets of Astana, a district in the North-Kazakhstan oblast, the Kazakh State Theater for Children and Youth in Almaty are named after G. Musrepov.

In 1991, was opened the literary-memorial house-museum of G.Musrepov, where the writer lived. In 2002 in Almaty, devoted to the 100th anniversary of the writer, a bronze monument was erected on Ablai Khan Avenue in front of the G. Musrepov Theater and a commemorative coin was issued with a face value of 50 tenge. From Abai Avenue to the Exhibition, Musrepov Boulevard is built.