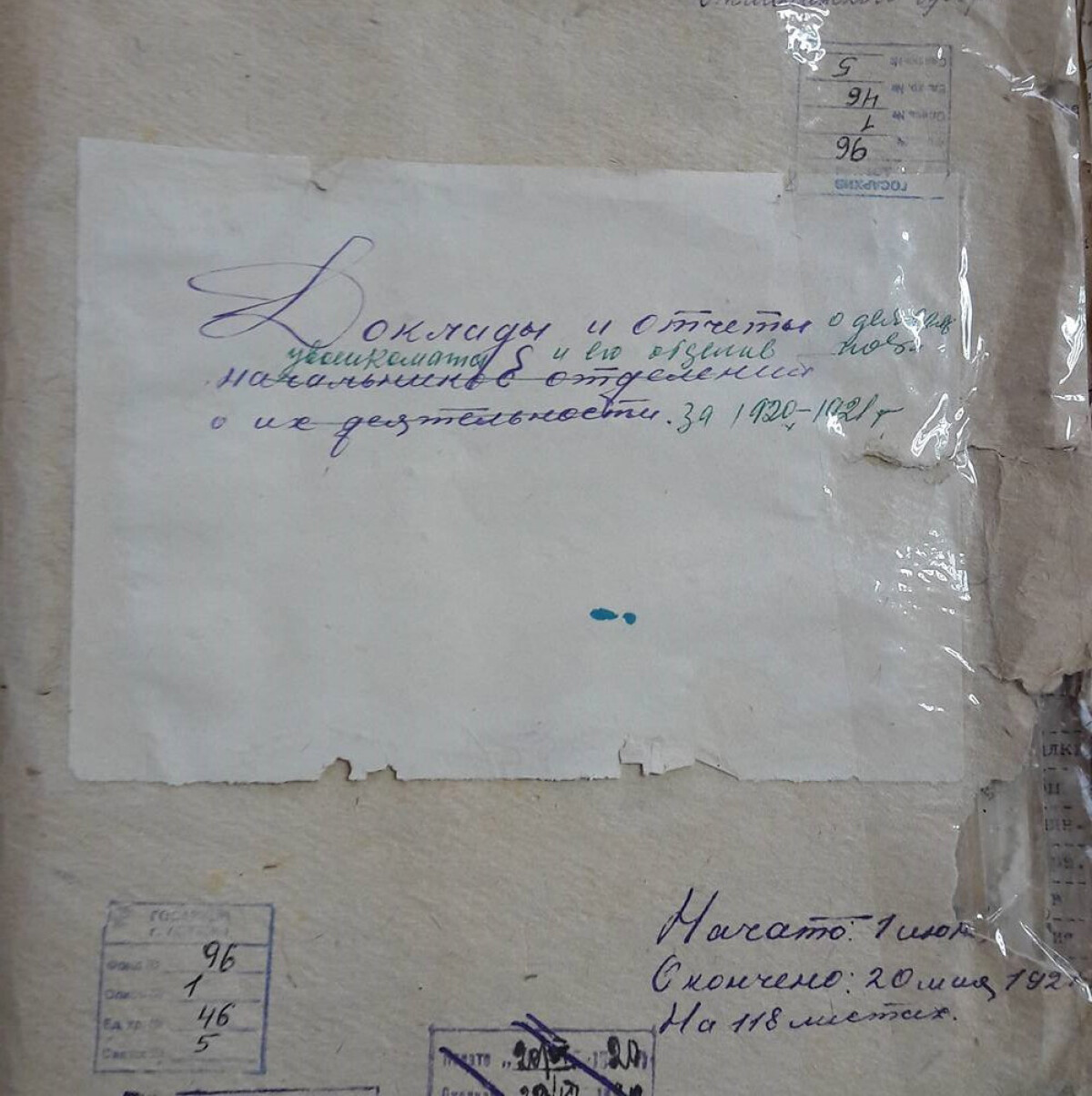 In the funds of the State Archives of Astana, documents on the military-economic history of Akmola County were revealed. Interesting data are in the reports of the Akmola military commissariat

In the initial period of the construction of the Red Army, in separate operational directions, formations, called fronts and armies, were created. Parts and detachments of fronts were united in the army. In connection with the rebellion of the Czechoslovakian Corps as of June 13, 1918, the Council of People's Commissars established the Revolutionary Military Council to lead the detachments operating against the insurgent corps on scattered local fronts. In June-August 1918 the troops were transformed into infantry divisions and consolidated into five armies (1, 2, 3, 4, and 5). The Civil War required the creation of an administrative apparatus for solving military and economic problems arising in Siberia and Kazakhstan.

Against the South Army of Ataman Dutov, the Semipalatinsk and Kokchetav groups of troops were established.

On August 27, 1919, the All-Russian Central Executive Committee adopted a resolution "On the formation of civil administration in Siberia," according to which the Siberian Revolutionary Committee was established, the newly formed provinces and regions were subordinated to Sibrevcom.

On November 15, 1919, by the resolution of the Sibrevcom and the Revolutionary Military Council of the Fifth Army, the Omsk Revolutionary Committee was formed.

We bring to your attention some data from the "Report on the Activities of the Akmola County Military Commissariat" as of 1920. 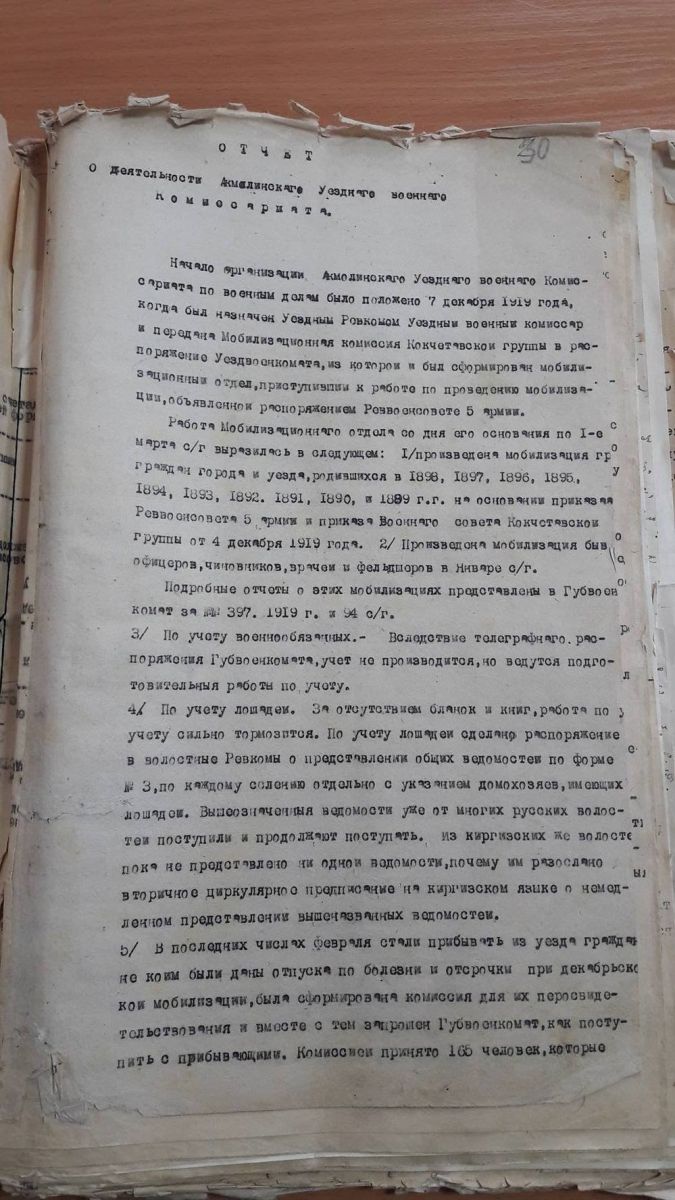 The work of the Mobilization Department from the day of its foundation to March, 1 (1920) was as follows:

2. The mobilization of former officers, officials, doctors and paramedics in January. Detailed reports on these mobilizations are presented in the Gubvoencomat under No. 397 as of 1919 and No. 94.

3. On accounting for military liable. Due to the telegraph order of the Gubvoencomat, accounting is not carried out, but preparatory work is underway for accounting.

4. The account of horses. For lack of forms and books, work on accounting is very much inhibited. According to the registration of horses, an order was given to the volost of the Revolutionary Committees on the presentation of the general statements on Form No. 3, for each village separately, indicating the householders who have horses. The above-mentioned lists have already arrived from many Russian volosts and continue to arrive. Of the Kyrgyz volosts, not a single sheet has yet been submitted, why they sent out a secondary circular instruction in the Kyrgyz language about the immediate submission of the above-mentioned statements.

5. In the last days of February, citizens began to come from the county, sick leave and deferment were given during the December mobilization, a commission was formed to re-examine them and, at the same time, the Gubvoencomat was asked what to do with the arrivals. The commission accepted 165 people. 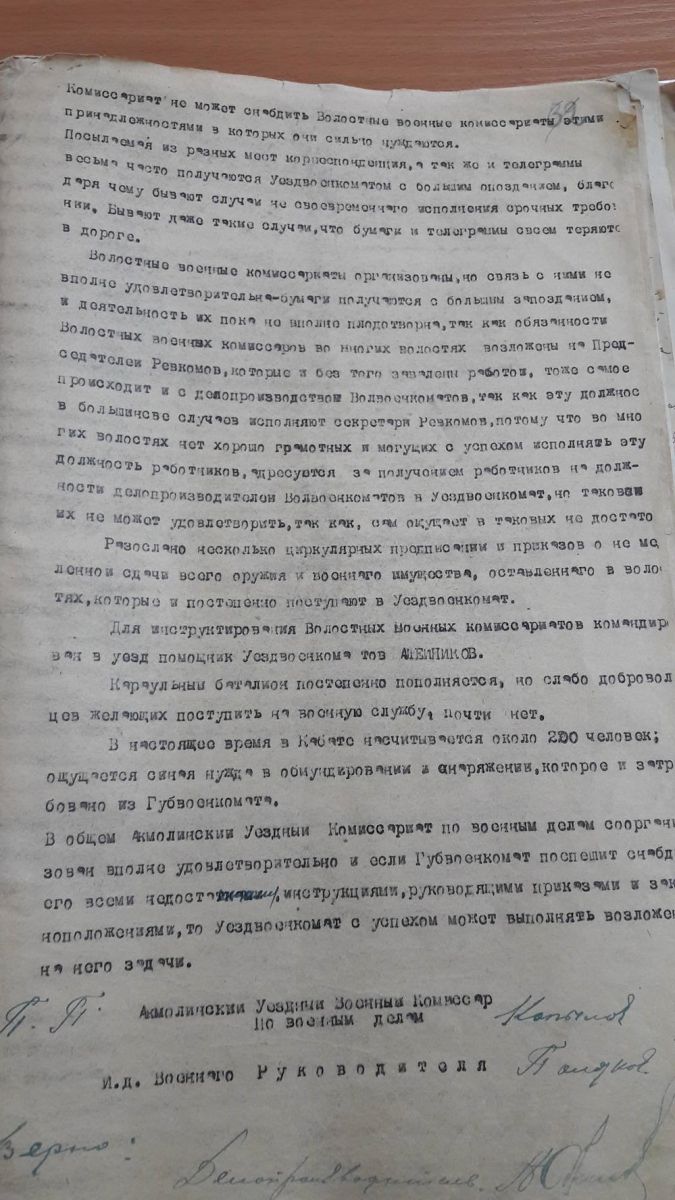 Volost military commissariats are organized, but the connection with them is not entirely satisfactory, the papers are received with delay, and their activities are not yet very fruitful, since the duties of the Volost Military Commissars in many volosts are assigned to the chairmen of the Revcoms, who are already busy with work, the same is the Vol Military Committee, since this post is in most cases executed by the Secretary of the Revolutionary Committees, because in many rural districts there are no well-trained and able to successfully perform this post workers, is addressed to the receipt of employees on the post by the clerk of the Volvoencomat to the County Military Commissariat, but it can not satisfy the latter, since they themselves need such.

Several circular orders have been sent out about the complete surrender of all weapons and military equipment left in the volosts, which are gradually being sent to the County Military Commissariat. To instruct the Volost military commissariats, the assistant of the Uyezdvoencomat Aleinikov was sent to the county. The guard battalion is gradually replenished, but few volunteers who want to enter the military service are almost gone. At present there are about 200 people in Karaulbat. There is a strong need for uniforms and equipment, which was requested in the Gubvoencomat. In general, the Akmolinsk Uyezd Military Commissariat is organized quite satisfactorily and if the Gubvoencomat hastens to supply it with all the instructions that guide visitors and statutes, the Uezdvoencomat can successfully perform the tasks assigned to it.

In additional reports as of 1920 it was reported that there were unfavorable conditions that complicated work on the contentment of units. Uprodcom and Ueconot, which are sources of food, heating and lighting, do not have the necessary supplies, and the Uezdvoencomat itself has to find means and ways of satisfying the portions to be supplied.

The garrison is set up in a revolutionary way, only the dissatisfaction of the Red Army soldiers from Akmola County is felt because the Kokchetav group, when mobilizing left three volosts and the Red Army men alone live at home. The mood of the citizens of the city and the county-the Russian-is partly revolutionary, partly neutral and in no greater number counter-revolutionary (peasants and speculators), although they do not make speeches, but hiss and try to sow discord and doubt among the dark masses of the peasantry. The Kyrgyz population, by virtue of their fanaticism, although they are not active, regard the authorities with distrust and hamper the work of not only the Uezdvoencomat (collection of weapons and property), but also of other institutions. Political work among Muslims is very, very weak, and therefore the agitators-organizers will have to show maximum strength and energy. The party life of villages is such with a small exception, the cells of RKP in the parishes very, very little.

The bulk of the documents of the Akmola revolutionary committee were sent to Omsk as a report and for information on the work done. At the same time, the periodicity and terms of submission were strictly determined. The value of archival documents is unquestionable due to the fact that they tell about a very important period in the history of Kazakhstan. 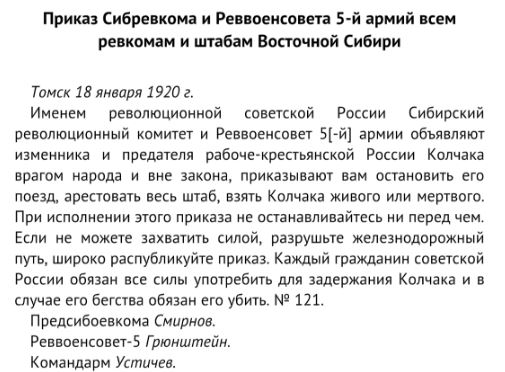 This year our country marks a big date - the 100th anniversary of the creation of the Alash autonomy. In this connection, a natural question arises, but how did the government of Alash deal with the issues of military organization, mobilization and military support?

The editorial staff of the National Digital History portal plans to cover the issues of the activities of the Alash party and leaders of the national intelligentsia on the pages of the portal.