Home News History in 5 minutes Victims of Holodomor: data base

Victims of Holodomor: data base 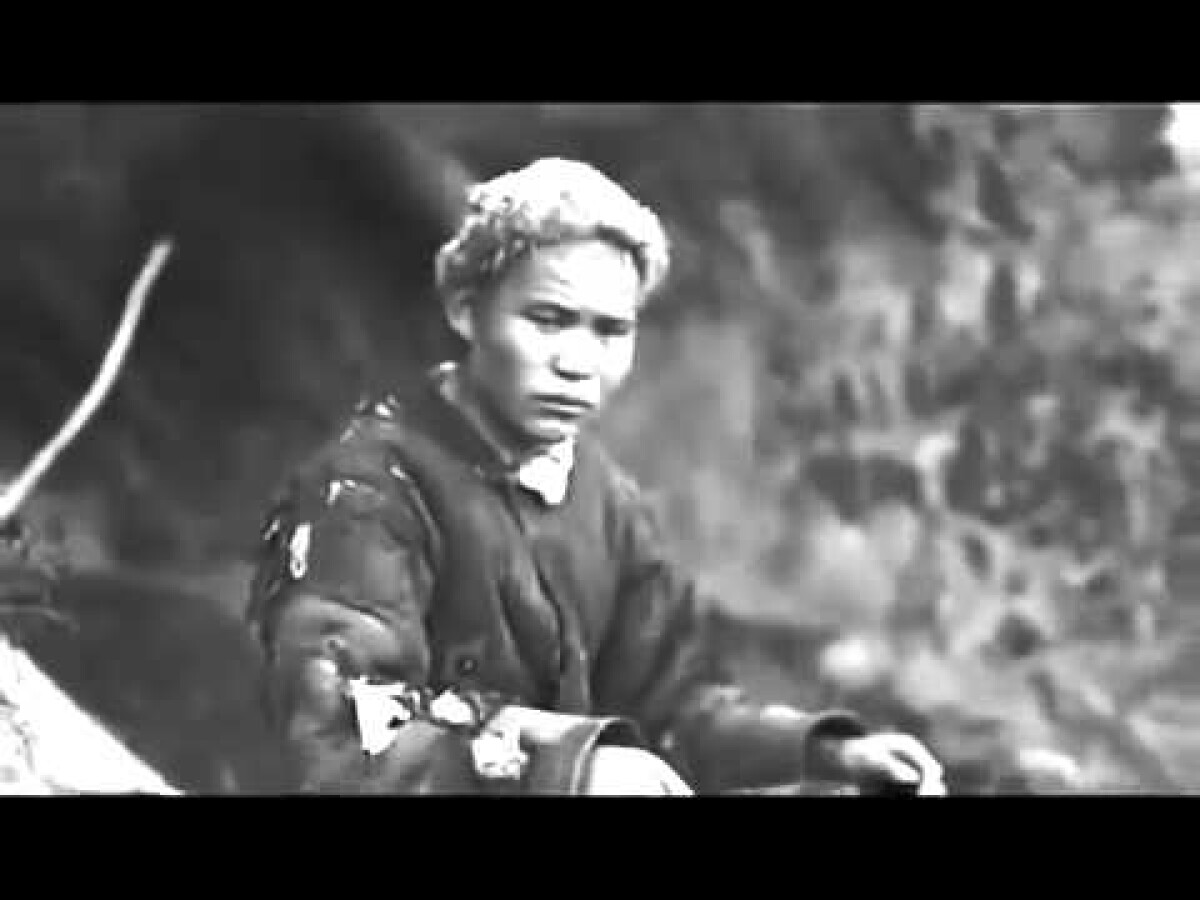 In the 30s of XX century Kazakh people was subjected to demographic abolishment. Millions of people died, hundreds of thousands of families were compelled to run behind the borders of Kazakhstan

The main victims of hunger were ordinary residents of auls, that is why their names still are not known. The party of Bolsheviks, the politics of which became the chief reason of Hunger, were interested more in party cards, rather than human fates.

That is why the data on died people in the years of hunger does not exist. It is not sufficient to base upon only the memory of people. Each year many onlookers thinned out, and their descendants in the third, fourth generations can not bring to us the full picture of those years. Since 90s of XX century scientists – source-study experts of the country started to create special expeditions on the whole republic because of the data collection from the eyewitnesses of hunger.

However, within the expedition it is not possible to collect the information about all the 2,5 mnl victims. Today, in the epoch of development of innovative technologies the methods of exchange with information rose to the high level. The Archive of the President RK, chief keeper of political history of XX century, set the aim to create the search system. In 2016 the Archive started the project of research of Hunger in Kazakhsran in 1930-1933 yy.

The main aim – accumulation into the united base the documents of those tragic years and designation of the names of died people. Today the works on the development of united electronic data base continues.

This base is the instrument of the renewal of historic heritage of Kazakh people. The project was elaborated specially for the all the people, that is in their refill of data base can participate every citizen, who has the information on victims of Hunger, for that it is necessary to visit the site www.asharshylyq.kz and introduce the data of the relatives who became the victims of hunger or were forced to leave the country in the difficult years.

In the base are filled the following sections: personal data, nationality, the year of birth and death. In the section “Decampment” are indicated the years and places of decampment. Also, in the special section are marked the sources of information. 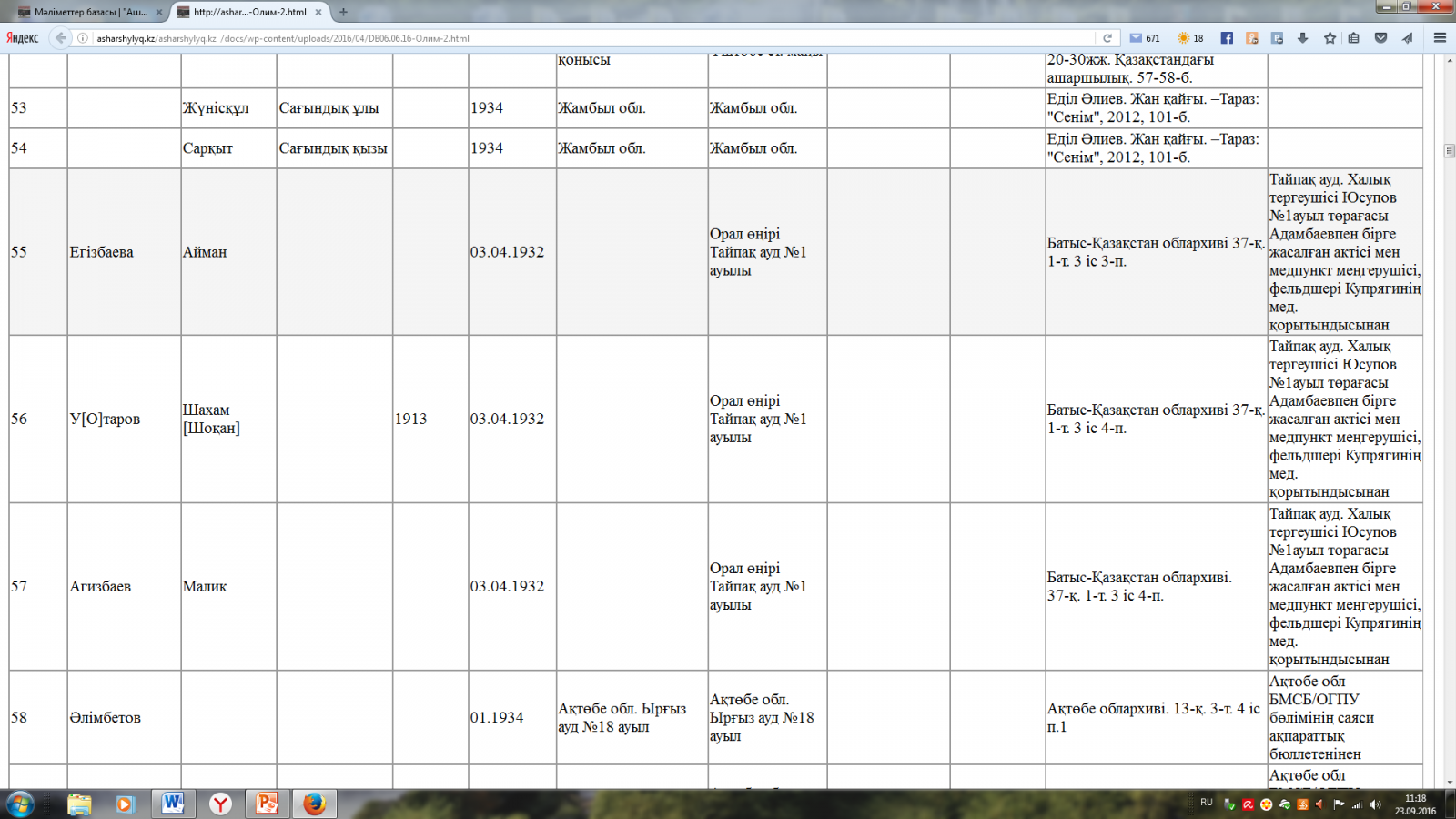 In March 2016 in the Archive of the President RK the given project was discussed at the round table with the participation of the representatives of science.

The special address to the people about presentation of the information about relatives who became the victims of Hunger. With the cooperation of all the state archives of the country was studied the literature of the given theme, from which were selected the names of the died. From oblast archives came the collections of materials from the Joint State Political Directorate, acts of the died from hunger, created together with a physician assistant and local police officer, also chairmen of the local councils, data of the healthcare bodies.

In the project participate research assistants. One of the first to respond was the doctor of philological sciences, professor Askhat Kamzauly Alimov.

Under the edition of Askhat Alimov was published the collection of memories “Hunger in 1931-1933 years: onlookers say”. The e-version of this collection he passed to the Archive for the placement on the site. In the memoirs were revealed 30 names. All of them are included to the base and placed in the special section of the site with the indication of the authors of memories. This research work Askhat Kamzauly conducted together with students of the Institute named after the academician O.Zholdasbekov.

Askhat Kamzauly work as a senior manager of Almaty branch of the “Center of pedagogic mastery” of the AOD “Nazarbayev Intellectual school” and still continues the study of the theme of Hunger.

One more scientist, who researched the theme of Hunger, famous source-study expert, professor Kmabar Makhambetuly Atabayev. In the 90s under his direction was organized the students’ expedition. Materials of the expedition to the archive passed the spouse K.Atabayeva Maigul Mauytkhankyzy Sadykova.

Among the manuscripts the most valuable for us are the names of the victims of Hunger. For the site www.asharshylyq.kz also came the memories of other people. One of them – memories of the citizen of the city of Almaty Yesbolova Markiza Bazarbaykyzy about her family. She named 12 of her relatives, who died from Hunger. From the Chairman of the “Social organization “Asharshylyk” Ramazan Kurmanbayev came materials. He is the author of the documental film “Asharshylyk” which was shot together with the producer E.Rakishev, memories of the resident of the kolkhoz Zhideli, settlement Arykbalyk, Kyzylorda oblast Kanzada Karaburayeva.

To the base were introduced 51 names collected on the data base of close relatives of the victims of Hunger. In the Archive of the President RK there is the huge library fund. On the books, written on the theme of Hunger were selected 102 surnames. Majority of materials in the data base are the archive documents, mainly from the funds of the Archive of the President RK.

Only on one document – letter of the head of the district to the Oblast Committee were given the names (written in Latin characters) 173 people died from hunger. In the collections of the AOD in the funds of the Communist Party of Kazakhstan covering 30s of XX century were set the names of the dead.

After the finish of the Holodomor in 1934-1935 yy. party heads started to count party tickets and account cards. In the course of work were formed the lists of missing people from the party and dead communists.

There are no such lists in former and following years, as it the mass death of people from Hunger did not exist. On these documents were designed names of 932 people. For half a year were revealed over 1000 people. 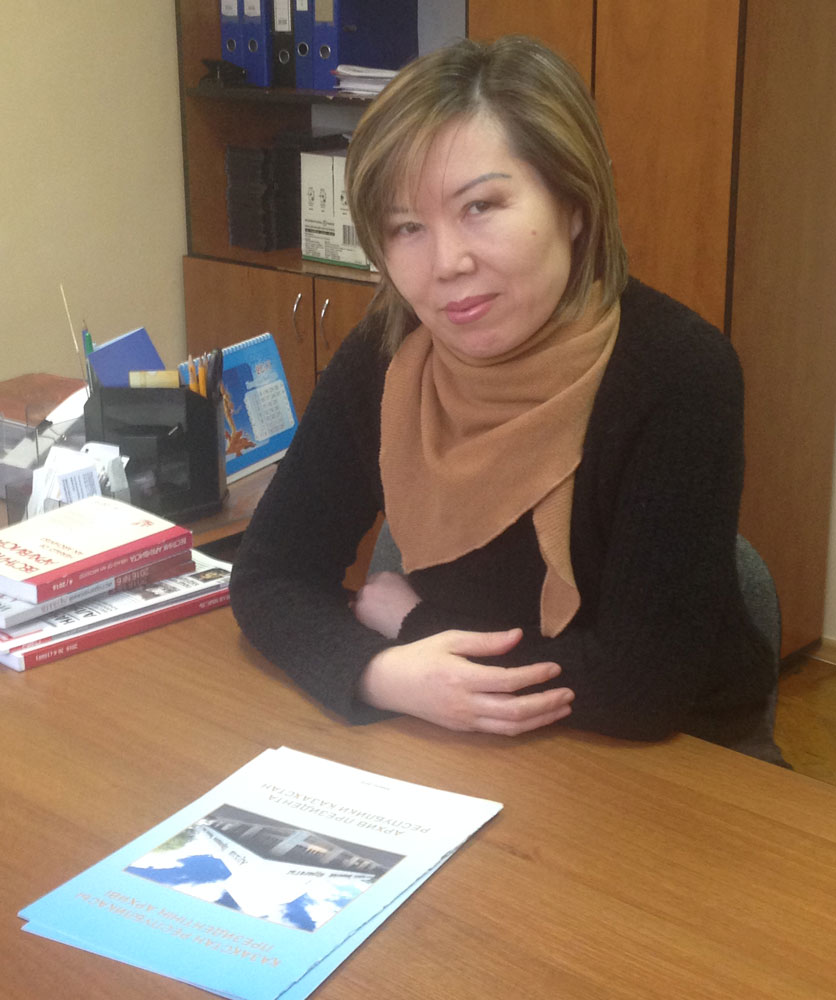 Similar record data could be run not only by communists. It is necessary to study such sources as documents of aul councils and child houses for 1930-35 yy., which are kept in oblast, central, state archives.

By means of the request to all the archives were indicated the documents which are possibly kept the names of the victims of Hunger. One such method of study demands much time. To esteem the past of their people with special consideration, keep in the memory the names of victims is the duty of each representative of young generation. The transfer of data to the archive for state storage in its turn will prolong the life of these documents and provide the preservation of people’s memory for future generations.

One of doubtless and main notions of the idea “Mangilik El” consists exactly in that. The created united base will conduce to the widening of history and respect to the victims of Hunger of 1930s. We call all the people, research centers, historians, and source-study experts to take part in the common noble case.

Senior fellow of the Archive of the President RK