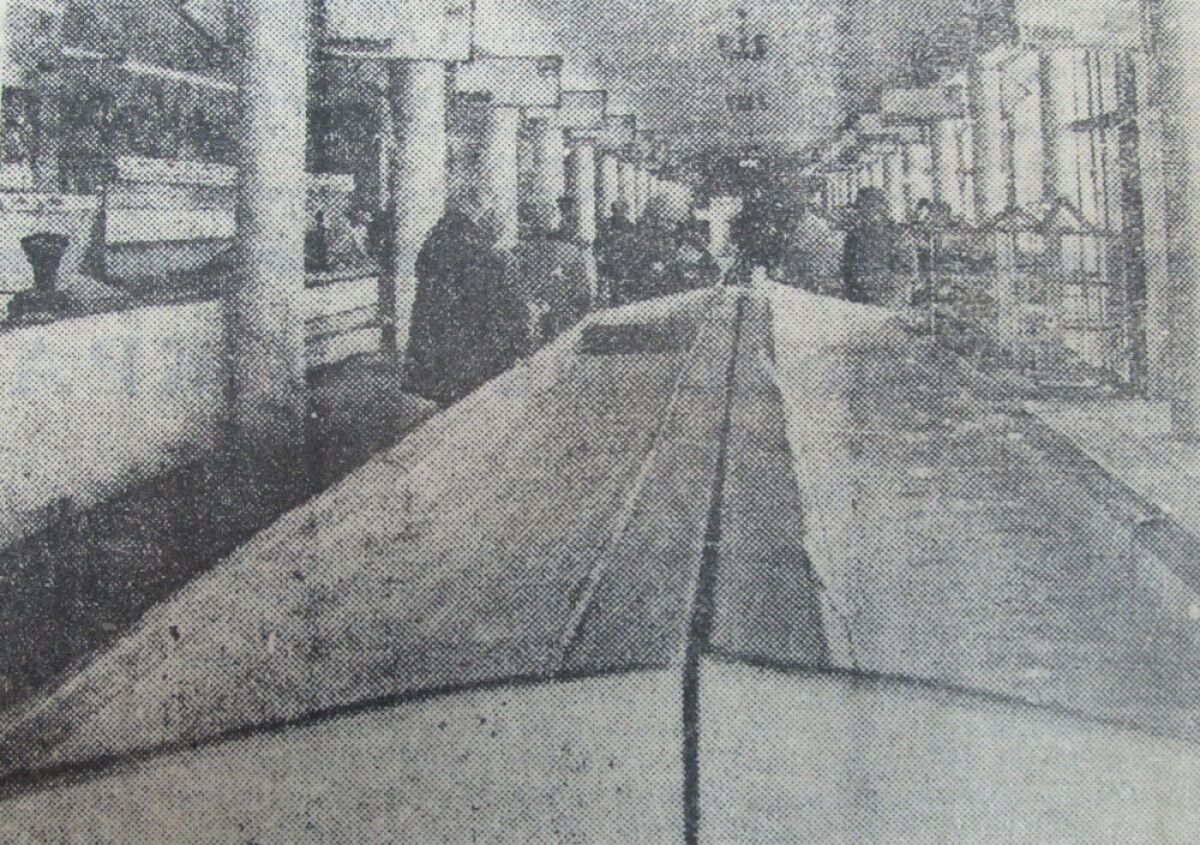 The way to market economy was thorny. After the collapse of the Soviet Union the young Kazakhstan came across multiple difficulties, the most complicated were economic ones

The fall of vertical ties of the national economy complex of the USSR, the stoppage of factories and plants, hyperinflation, unemployment and shortage of the volume of production of industrial production demanded the reformation of economy, then the modernization of political system. The world experience confirms that without the market the high effective economy, flexible and receptive to changes, stable changes in the socially oriented structure of social demands, are not possible.

At the first stage Kazakhstan was imposed because of the mutual dependence from processes, taking place in other countries of the CIS, the program of unworked radical modernization. After Russia the republic had to follow the monetary model of the accelerated “shock” transition to the market.

This project was firmly attached to the arguments of Western sample and did not take into account the specifics of Kazakhstan. Market economy with full liberalization of prices and harsh restrictive finance-credit policy under the conditions of the absence of market infrastructure, led to the harsh increase of prices, sharp payment and financial crisis. The rapid shortage of the demand for the production of Kazakhstan enterprises (first of all, the heavy industry) evoked the dramatic fall in economy.

Inflation reached 2000–3000%. All of that told about the fact that systematic economic, market reforms in the conditions of the most difficult transit it is necessary to conduct on all the directions rapidly. 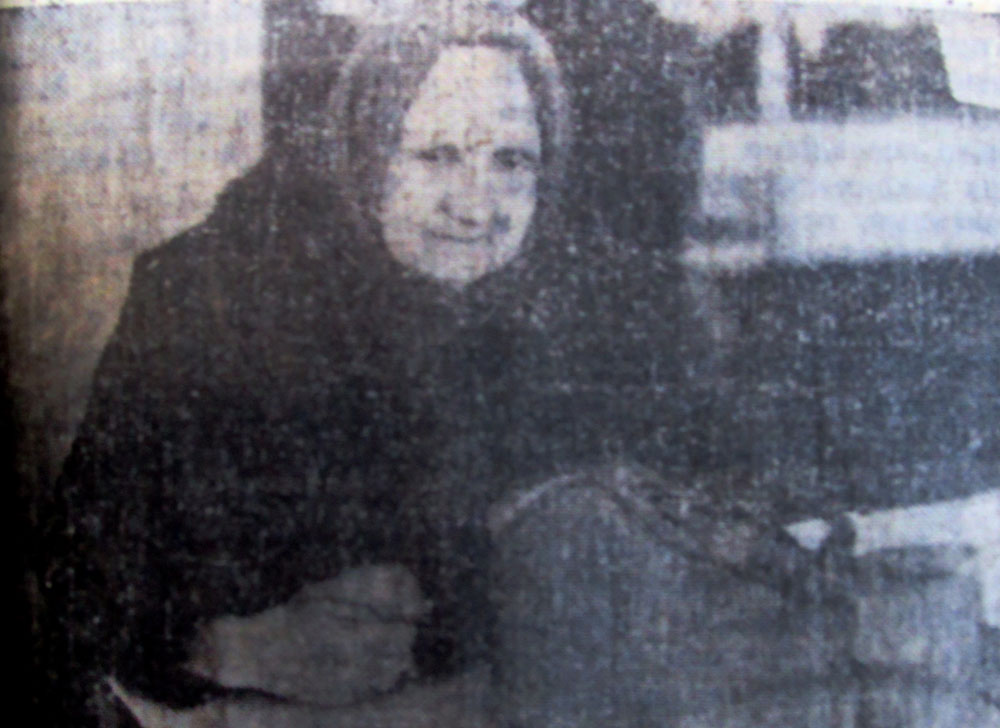 2 January 1992 without any preliminary consultations with the countries-neighbors in the CIS and without informing Russia “decreased” prices. The instant transition from state regulation of prices to market system of pricing was accomplished.

The growth of prices exceeded all the expectations during one 1992 the prices rocketed many times over. All the savings of population went down in value. The majority of population occurred by that below the poverty line. The liberalization of prices caused the harsh growth of tariffs for transportation, prices for energy, raw material and others. The fall of industrious production for 1992 consisted of more than 20%. The starting liberalization of prices turned for Kazakhstan with the significant economic fall.

Goods from Kazakhstan with big streams to the territory of Russia, and the huge, and non-provided money mass with rapid stream flowed the market of Kazakhstan, rising already expensive consumer goods  and household items. In the given situation the administration of the republic had go off the liberalization of prices for various categories of goods.

3 January 1992 Nursultan Nazarbayev signed the Decree “On measures of the liberalization of prices”, according to which with the aim of stabilization of social-economic condition of the republic and creation of conditions for the formation of market relations in economy starting with 6 January 1992 was realized the transition to the appliance of free (market) prices and tariffs for the output of production and technical designation, consumer products, works and service.

According to the Appendices №1 and №2 were set the tariffs for certain types of the output of production and technical designation and main consumer goods such as bread, milk, sugar, salt and others.

6 January turned “black” Monday. Besides, the prices for all the products grew many times, there were no other changes, there was no abundance.

In Almaty there were queues for product cards, in Pavlodar the delicatessen counters of the supermarket did not work, and in other departments there was empty, bread was sold by two breads for a person, in Karaganda from 4 am people stood in a queue in front of the store door for dairy products, the whole goods were sold out rapidly notwithstanding the fact that prices became even 3, 5 times higher.

The Director of Karaganda dairy plant named after S.Rybnikov expressed simple, but a stroke of genius, “One can till infinity increase prices, but herewith not provide the ruble with goods, and any economic reform the failure is awaited”.

In Aktubinsk the counters were empty both before New Year, and after liberalization. In the shop “Ocean” two queues, one for vermicelli by card system, another – for bread. The worker L.Mostovaya cries that at Christmas there was nothing to put on the table, and neighbor L.Batalova added, “Prices are enormous, and there are no products at all”. In Uralsk speculators sold the cigarettes for 10 rubles, and the bottle of vodka cost 90 rubles.

They advanced the prices for vegetables and fruits in Tselinograd. Apples can be bought for 25-40 rubles a kilo, grapes for 35-40 rubles, lemon for 12 rubles in a piece. In commercial counters they sold Almaty “Dubek” for a piece 13 rubles, “Belomor” and “Astra” for 7 rubles. In Tselinograd started a rumor that Tselinograd poultry factory expressed the discontent with extra high prices for chicken meat and eggs. But the chief economist of poultry factory Sh.T.Shaimerdenov dispelled the rumor: “Nothing similar. The net cost for chicken meat is 35 rubles for a kilo, net cost for eggs – 6.60 for a dozen Again the feed stuff became more expensive. 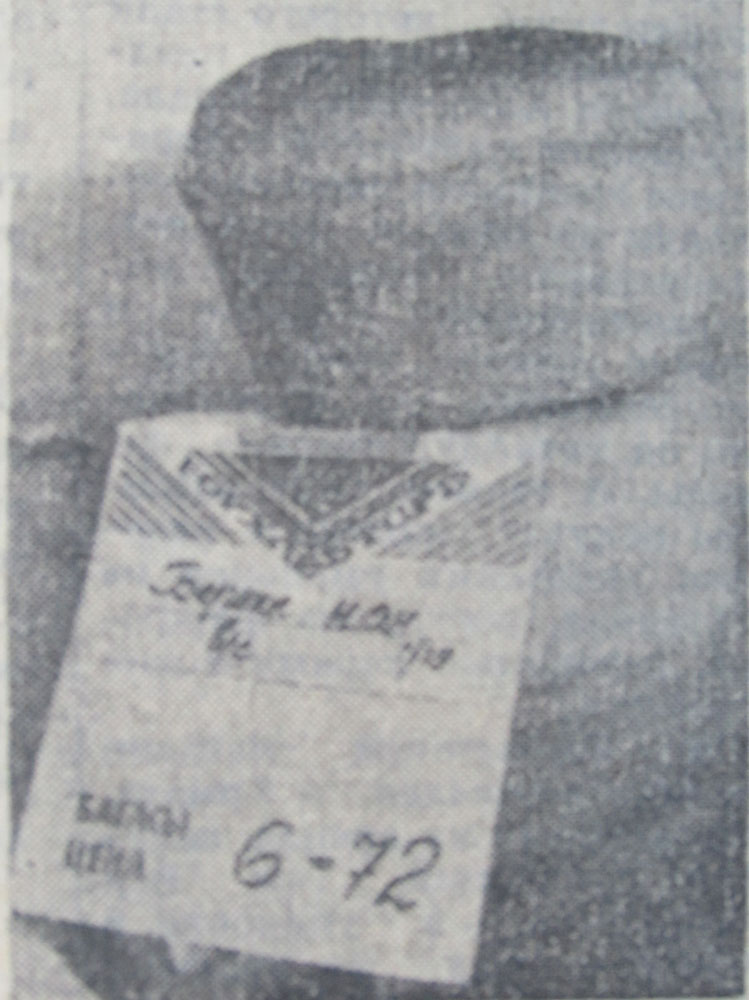 9 January continued the work the Seventh session of the Supreme Council RK and deputies were interested in the question, how to live further with such prices? The response of the Prime Minister of the republic S.A.Tereshchenko, that happened can not be called as the increase of prices, evoked disapproving hum among deputies.

New prices were not set by the Government, but the producers of the production in order to save the rentability of economies at least at the level of 40-50%. And concerning the various prices in the shops Nursultan Nazarbayev responses that there is nothing bad as the market presupposes the competition.

Let the prices set not only by shops, but also the meat packing plants, sovkhozes, rent enterprises, producers. The market liberalization intensified the tense situation in the republic. Especially violent splash of evoked the price liberalization. People waited for the promised increase in 304 times and filling because of it the shop counters, disappearance of lines.

However, prices grew, with the rare exception, by 10-20, and for many types of the food and manufactured goods by 100 and more times. And the salary doubled. And nothing was added to trade. In the most distressful situation were pensioners, invalids, students. At the square of Republic in Almaty appeared the pickets of teachers with the demand of defence from unreasonable expensiveness.

And near the House of Government the picketers among whom were the representatives of the party “Zheltoksan” demanded the cancellation of 5-year-old restriction for residence permit, defence of rights for the dwelling.

A group of deputies in Alma-Ata City Council in their address to the President of the republic paid attention to the inactivity of local bodies of power and administration, which prevent the development of normal market structures, that painfully reflects on the promotion of reforms.

In Karaganda started the wave of mining strikes, the reason of which became the dramatic rise of prices on products in mining canteen. The threatening situation set in other industrious objects. Stopped the steel industry and rolling at Karaganda metallurgic plant. The transition to the market was complicated because Kazakhstan at the starting point continued to stay in former, financial and economic system. 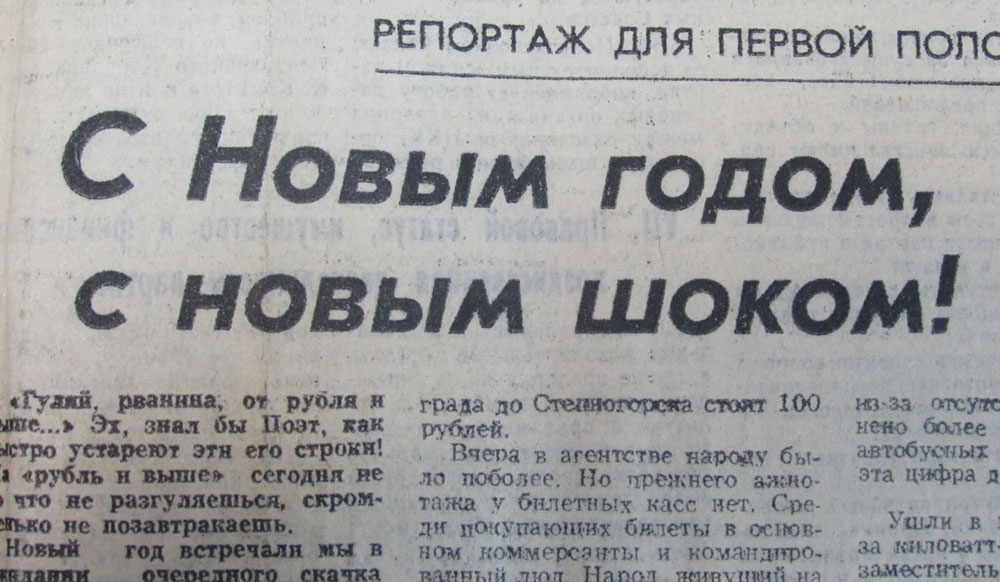 10 January Prime Minister S.A.Terechenko at the meeting of the active of the Federation of trade unions of the republic declared that the Government will take the    measures on the decrease of prices on food products. The ceiling price for a bread will be set within the limit of 2 rubles 80 coins, kilo of curd - 4.65 rubles, and sour cream - 4 rubles 20 coins.

For the dotation on products the Government takes out 10 mlrd rubles. Understanding the whole difficulty of the situation the Head of the state delivered the speech with the Address to people of Kazakhstan. One more time he underlined that the alternatives to the market exist, and the process of growth was inevitable. “Shadow merchants” made a profit on it and they had to put an end to it.

Nevertheless, we addressed with the proposal to the administration of Russia and other republics to postpone the liberalization of prices till 1 July 1992, considering the chosen for it moment extremely inappropriate. It is prohibited to go for such measure in the conditions of winter. That is why, using the given to me power , I made up decision on the price freezing to all the types of bread, milk and dairy products at the level, which can not exceed by more than 3 times comparing with the former prices, functioning before their liberation. It is understandable that the given decision will have a hard impact on our economy and budget of the republic. 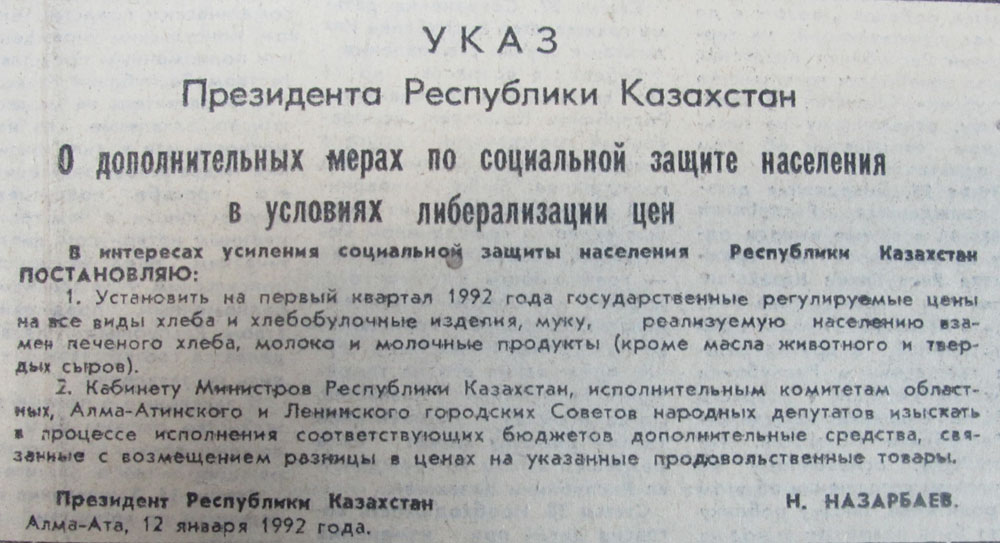 The President said not once, including the time during pre-election meetings with the voters, and more time underlined the way out from that complicated condition, in which Kazakhstani people occurred not by their own will, both for population, and for the producers is not in getting the wished by means of threat or conduct of the strikes on salary increase, compensation of any appreciation  or limitlessly raise prices for the production.

The outcome can be only the new turn of inflation, from which will be even worse to both consumers and producers. The way out here is one – more and better work in order to constantly and consistently increase the wealth of people.

12 January 1992 was signed the Decree of the President of the Republic of Kazakhstan “On additional measures on social defence of population in the conditions of the liberalization of prices”. According to the Decree “in the interests of fortification of the social defence of population of the Republic of Kazakhstan were set the state regulated prices for all the types of bread and flour products”. By making the decision on the formation of social-market economy, without which it is not possible to enter the community of prosperous countries, society has to go through this stage.

And Nursultan Nazarbayev as well the President as the guarantee of the Constitution tried to do everything that was in his power and possibility in order to simplify hardships of the difficult transition period for the Kazakhstan people.