Trick that was put forth by Kazakhs at Anrakay battle 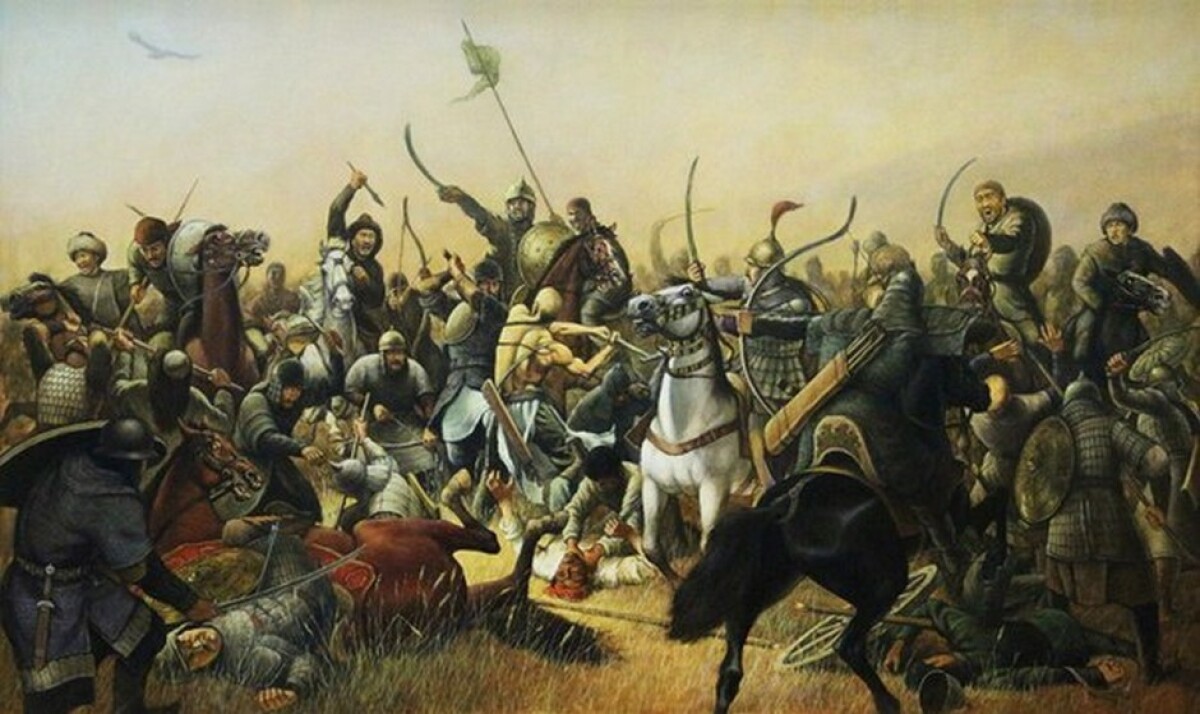 Anrakay battle – the testimonial of the courage of Kazakhs against the multiple Kalmyk troops. It must be transferred to our descendants as the historical fact, but also as the sample for the copying

If to believe to reliable sources of folklore, the location where Anrakay battle happened was placed in the north-eastern part of Anrakay valley on the plain of Alakol. And if to mark the border between Anrakay then from the south-west side is located the water-dividing branch, in the north-east side – Beskol, in the west – the river of Kopaly and influxes of Karakemer, in the east – the river bed of Serybulak, only 210 square kilometers. Exactly at that place is situated the epicenter of military actions, where was put a period to the destructive of raids of Dzhungars.

Researchers revealed that the location of Anrakay battle has the form of a triangle. People inhabiting “Anrakay triangle” firmly defended their lands from enemies. Only one shortage was in the north-east part, where in the valleys of Kopaly, Karakemer, Sarybulak was weak defence. At that place went the Great Kalmak road stretching for 8-10 kilometers, occupying the southern and north-western parts of the Kazakh steppe. 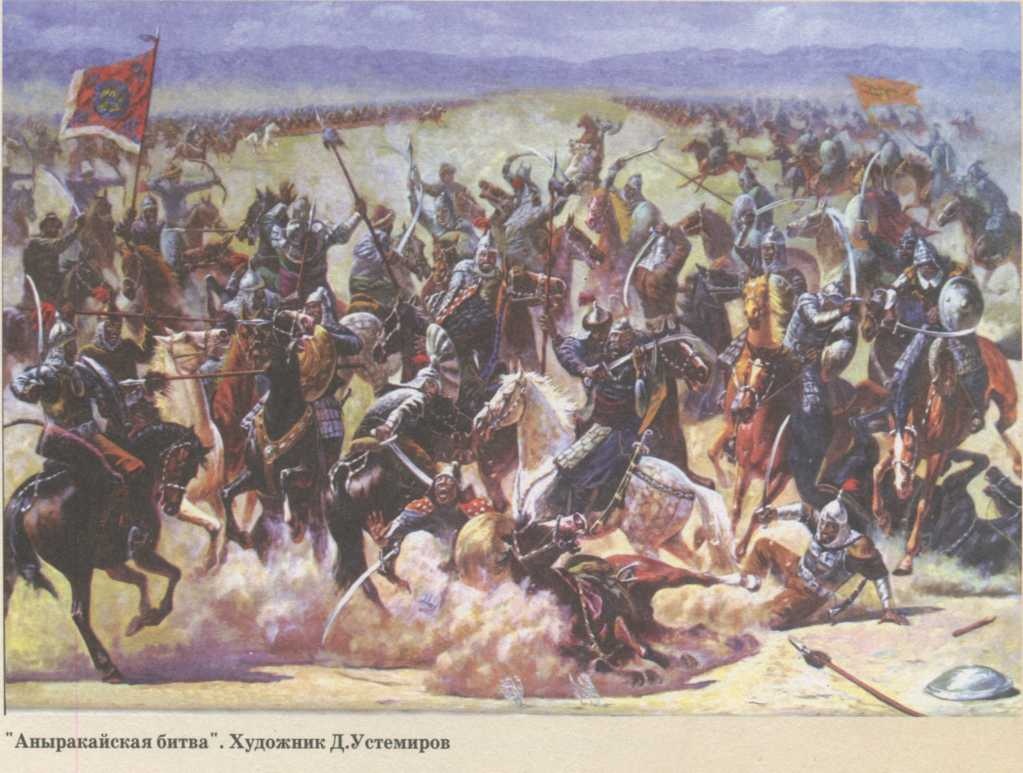 Exactly from this point of view Anrakay had the military-strategic meaning. Since the second half of XVII century to XVIII century between Dzhungar khanate and rivers Chu and Talas were 19 or even more military fortresses. In 1728 Dzhungar khan Kaldan-Seren appointed his son-in-law Latszan-Seren the chief commander of 5 th.troops. Many troops of Oirots acted against Kazakhs at Anrakay. At that time Dzhungars had the most powerful fortress in Semirechye. The fortress, built in 1653-1667 years and called among people Kalmyktobe, is placed in the north of Anrakay mountains.

One circumstance, which still did not find the reply, touches upon the battle. Because some researchers say that the battle happened in 1729, and other – in 1730. Let’s stop a bit at this issue. In 1729 China declared about the war with Dzhungar khanate and by the end of the year focused their military power. That’s why, Dhungar khanate concerned their powerful army at Anrakay for the battle with China. And Kazakh troops with the head of Abulkhair khan successfully used that moment and in 1730 moved to the south-eastern part of Balkhash through the rivers of Shu, Talas and conducted the decisive battle at Anrakay. 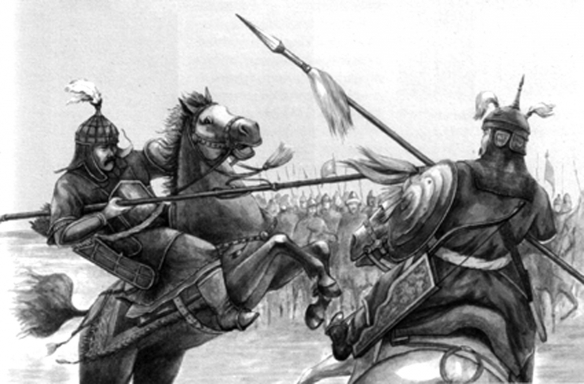 We have to note that Abulkhair khan used the progressive method of military tactics of those times. Kazakh troops reached Anrakay valey not on Great Kalmak way, but on the contrary direction, from the south-eastern side of Balkhash. The main objective of Kazakhs was to surround from the outer side Anrakay location and destroy the fortress Kalmyktobe, where were placed the main troops of Dzhungars (5-6 th.).

As we reminded earlier Abulkhair khan used the method of “steppe war”, having the centuries-long history. Military acts were realized by three cavalry troops, where participated the famous Kazakh batyrs and commanders. Two troops watched the valleys of Sarybulak and Kapaly, which could serve the passage for enemies and attacked the fortress Kalmyktobe.

Shooting from matchlock guns, they fenced off Oirots and made them run. The escaped enemies in Anrakay gorge were met by archers. Dzhungars who met with the unexpected counterattack finally were demolished, and at last was ended the years long Dzhungar raids. The Commander-in-Chief of the united militia troops of three Kazakh zhuzes Abulkhair khan in April 1730 made the Contract on peace with Dzhungar khuntaishi Kaldan-Seren. Thereafter, Abulkhair khan set off for the regulating of relations of Kazakhs with Kalmyks and Bashkurts. 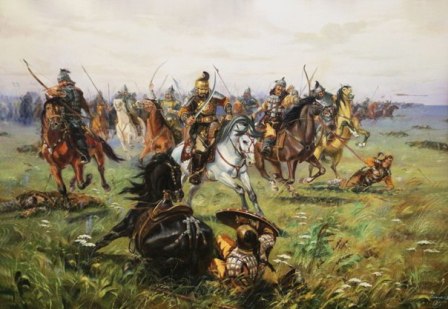 Anrakay battle had the huge significance in Kazakh history, first, it is the courage and bravery of people in the defence of Motherland, second, the victory of 2-3 th.Kazakh army over the Kalmyk troops of thousands. That is, now we can argue that fact that from two sides participated in the battle not less than 30-40 th.troops, and the battle lasted one and a half month.

Anakay battle having the 3-thousand history was written only in early XX century. And before that it was passed from mouth to mouth, from generation to generation. Anrakay battle was decisive in the fight between Kazakhs and Oirots, lasting for 8 years. This battle allowed Kazakhs to gain the day over their ancient strong enemy. It fortified the military spirit of Kazakh people, consolidated the feeling of unity and love for the Motherland.