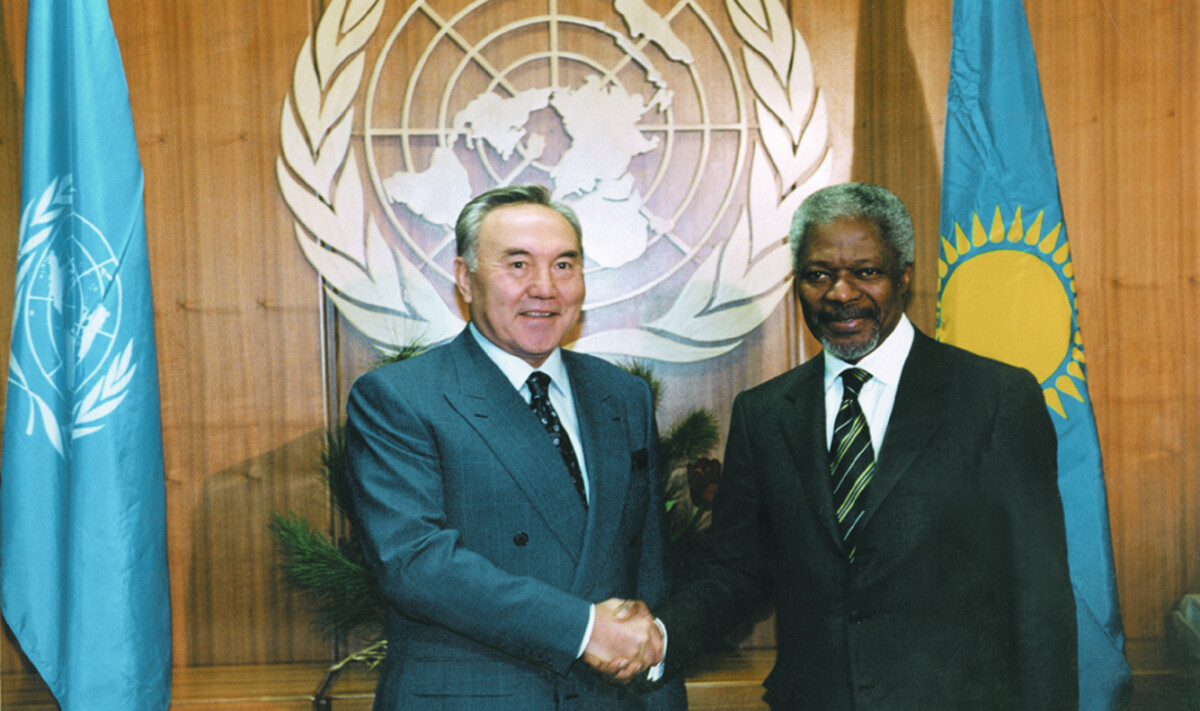 In 1945, at the initiative of the leading countries of the anti-Hitler coalition, the USA, the USSR, China, Britain and France was created a universal international organization of UN security

Reception at the UN is open to all other states, which, as stated in the article of the Constitution, are able and willing to fulfill certain obligations.

With the emergence of new states is increasing the number of UN member states. The table below shows the growth of the states-members of the United Nations over the years, since 1990, the Declaration of Sovereignty of the Kazakh Soviet Socialist Republic. 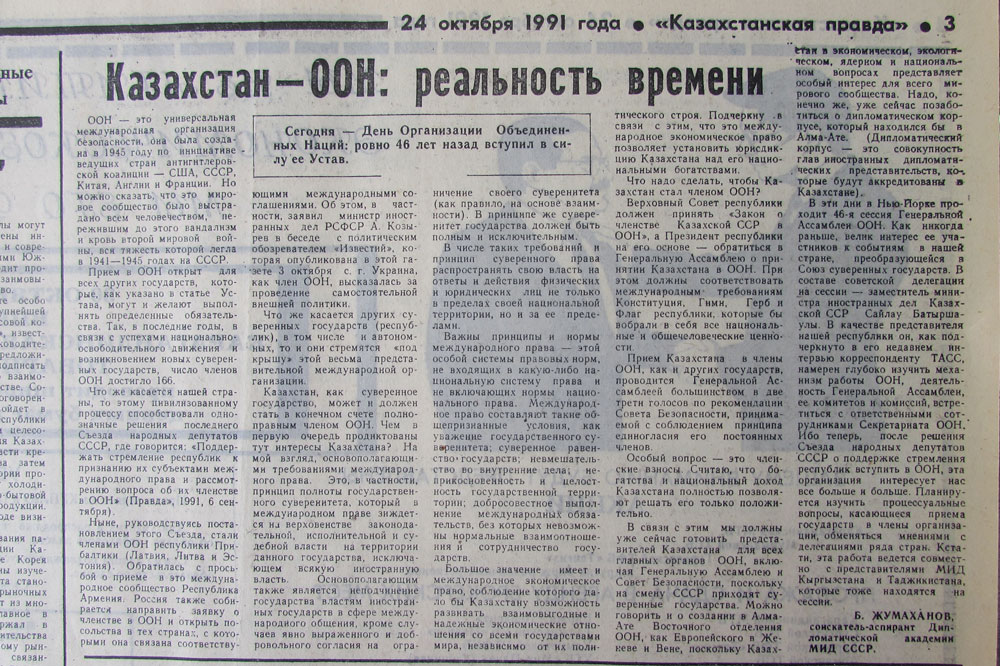 As for Kazakhstan, the beginning of the civilized process facilitated decision of V Congress of People's Deputies of the USSR, which states: "To support the desire of the Republics to the recognition of them subjects of international law and consideration of their membership in the United Nations" (Decree of 5 September 1991 "About Measures stemming from the joint statement by the President of the USSR and the top leaders of the union republics and decisions of the extraordinary session of the Supreme Soviet of the USSR "// Pravda. 1991. 6 September).

Following the decree of Congress, members of the UN in 1991 became the Baltic republics (Latvia, Lithuania and Estonia). The Republic of Armenia requested for admission to this international community.

In the newspaper "Izvestia" on October 3, 1991 the RSFSR Foreign Minister A. Kozyrev in an interview with political analyst of the "Izvestia" said that Russia also intends to send an application for membership in the United Nations and open embassies in countries with which it is linked by relevant international agreements.

Ukraine, as a member of the UN, was in favor of conducting an independent foreign policy.

The newspaper "Kazakhstanskaya Pravda" dated 1991 reveals the position of the MIA USSR Diplomatic Academy post-graduate B. Zhumakhanov to this process.

In 1991, for all sovereign states (republics), including stand-alone, was characterized by a desire to get "under the roof" of this very representative international organization.

According to B. Zhumakhanov, Kazakhstan, as a sovereign state, can and must become eventually a full member of the UN. What are primarily dictated interests of Kazakhstan here? First of all, the fundamental requirements of international law. This, in particular, the principle of completeness of state sovereignty, which in international law is based on the supremacy of the legislative, executive and judicial powers on the territory of that state, excluding any foreign power. Fundamental is also a disobedience of the state to authorities of foreign states in the sphere of international relations, except the cases of explicit and voluntary consent to the restriction of its sovereignty (as a rule, on the basis of reciprocity). In principle, the sovereignty of the state should be full and exclusive.

Among these requirements is the principle of the sovereign right to extend its power to the responses and actions of individuals and legal entities, not only within its national territory, but also outside it.

What should Kazakhstan do to become a member of the United Nations? - the future diplomat asks.

The Supreme Council of the Republic should adopt the "Law on the membership of the Kazakh SSR in the UN", and the President of the Republic based on it - apply to the General Assembly the adoption of Kazakhstan to the United Nations. At the same time, the constitution, anthem, emblem and flag of the Republic, which would have absorbed all the national and universal values, should match international requirements.

Acceptance of Kazakhstan to the UN, as well as other countries, is carried out by the General Assembly by a two-thirds majority vote of the Security Council recommendations adopted in compliance with the principle of unanimity of the permanent members.

Special issue - the membership fee. It is likely that the wealth and the national income of Kazakhstan will allow fully solve this problem in the affirmative.

In this regard, we must now prepare Kazakhstan representatives of all the main UN bodies, including the General Assembly, the Security Council, because the Soviet Union came to replace sovereign states. We can talk about the creation in Almaty Eastern UN Office as European in Geneva and Vienna as Kazakhstan in economic, environmental, nuclear and national issues of particular interest to the entire international community. We must, of course, already take care of the diplomatic corps, which would be in Almaty. (Diplomatic Corps - a set of heads of foreign diplomatic missions, which are accredited in Kazakhstan).

In the days of the 46th session of the UN General Assembly in New York, the interest of the participants in our country events, which is transformed into the Union of sovereign states, was huge as ever. As a part of the Soviet delegation at the session participated the Deputy Minister of Foreign Affairs of the Kazakh SSR Sailau Batyrsha-uly. As a representative of the Kazakh SSR, he expressed his intention to comprehensively examine the work of the UN mechanism, the General Assembly activities of its committees and commissions, to meet with senior officials of the UN Secretariat. Since after the decision of the USSR Congress of People's Deputies about the support for the aspirations of republics to join the UN, the organization interested Kazakhstan more and more. It was planned to examine procedural issues of receiving states members of the organization. By the way, this work was carried out jointly with the Kyrgyz Ministry of Foreign Affairs and Tajikistan, which also were in session.