Akmola residents – the heroes of 1916 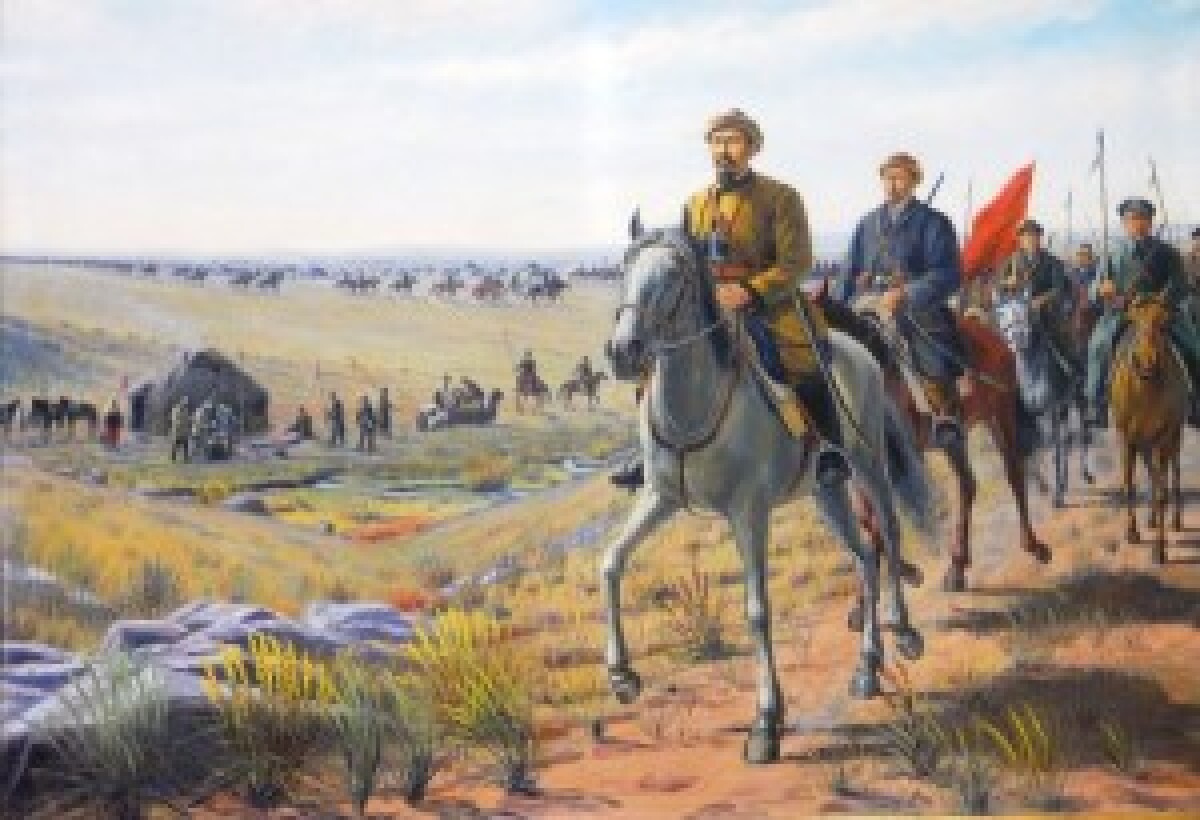 The Kazakhs of Akmola region opposed mobilizing of rear works. This article lists the names of the Kazakh heroes of the uprising in 1916

The Russian empire, involved in 1914 into the First World War, was in need of new human and material resources. Due to financial expenses, taxes were increased by 3-4 times, and in some cases 15 times. The special war tax was introduced. On the front’s needs the Kazakh people were seized of cattle, bread and other products without any consideration of real possibilities.

By the end of 1915, dissatisfaction among Kazakhs started to grow. Many regions refused to pay taxes, the cases of "free-will donations" and conflicts on this basis with the local administration become more frequent.

There was a question about the direct participation of Kazakhs in the war. However, the Russian government was not going to arm the "unreliable" Kazakhs. Instead, it was decided to use "mixed ethnic" of Russian population for rear works. June 25, 1916 was issued the infamous Decree, under which all non-Russian male population aged 18 - 43 should have been "requisitioned" to work on the creation of fortifications in the area of the functioning army and to the rear works. In total, according to preliminary calculations, should be mobilized 390 thousand men.

The decree set the Kazakh steppe in an extremely difficult position. Mobilization was carried out during the harvest and preparation of cattle to the stretch on the winter pastures, haying. The appeal of all able-bodied male population undermine the economic base of the Kazakh economy, already cranky of permanent withdrawal of land for settlers. In fact, the remaining Kazakhs were doomed to death by starvation in the winter 1916-1917.

The call of the Kazakhs to rear works initiated them to start the powerful uprising against the colonial administration. 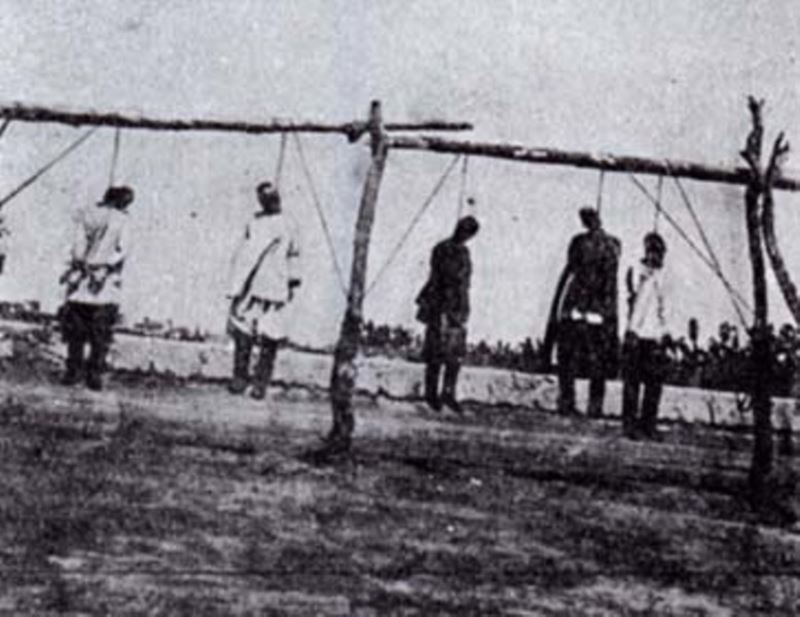 The news of the decree as of June 25 stirred up the whole Kazakh steppe. Spontaneous protests against mobilization was expressed in beating regional rulers, destroying their families lists.

Military regional governors reported to St. Petersburg that a decree of mobilizing rear works caused a general excitement among the people, mass meetings were held in auls and lists of mobilized were destroyed.

Folk performances covered Akmola region. The rebels destroyed the lists and beat representatives of the local royal administration. The uprising was also attended by the Kazakh workers of Spassky mines, Karsakpay plant and Dzhezkazgan mine, "Ridder company" mines and plants. In some areas, the number of rebels came to 7000 people. 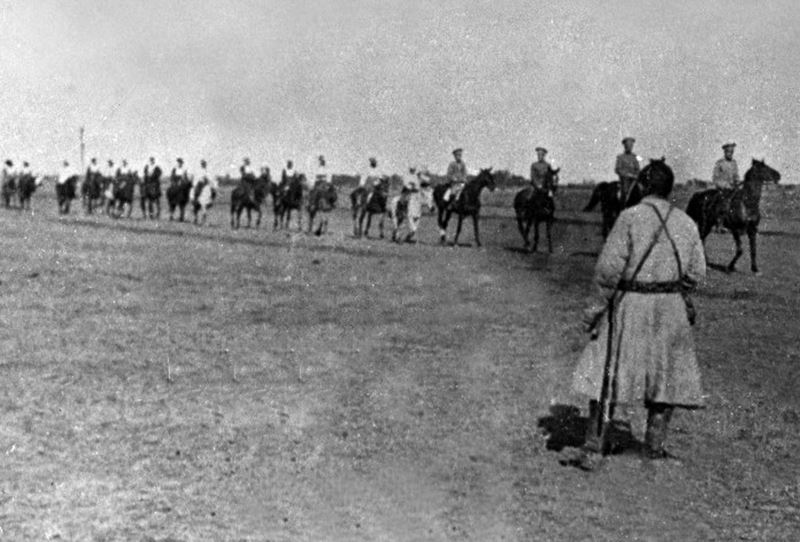 In the archives of St. Petersburg survived copies of the prosecutor of Omsk District Court to the Prosecutor of the Omsk Court of Justice, which referred to the Kazakhs, who were against the tsarist regime. In these documents, readers can find friends, maybe even family names. Orthography of documents are stored in the original.

"In September, within the Korzhunkulskaya oblast of Akmola about Korzhunkul lake formed assembly of the Kirghiz, who armed with homemade pikes and axes, were engaged in the training of military ranks and were awaited the arrival of Russian troops in order to attack them.

"September 13th by the ruler of Aksiyrakkulsk region in Akmola a list of 150 Kirghiz wishing to carry official bread to Petropavlovsk was presented; collection of the carriers was appointed on September 20 in Oksanovskoe village, through the aul elders, all were notified in time.

Meanwhile, by September 20th only 93 people came to Oksanovskoe, while the rest were arrested by the assemblage of Kirghiz aul number 1 of "Kosaydar" and aul number 4 of "Atygay".

These persons, for the purpose of disobedience to imperial order, sow discord among the Kirghiz, who were called up for rear works.

On this occasion, I suggested the court investigator Kalnitskiy to start preliminary investigation on the grounds of crime under p. 1 of 125 and p. 3 of 129 of Criminal Code". 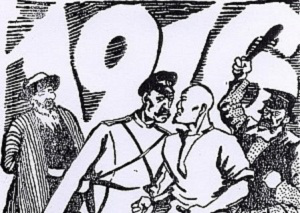 "Within Munchaktinskiy region in Akmola the Kirghiz assembly formed, who, according to regional ruler reports, had some organization and committed itself to prevent the implementation of the highest command of the Kyrgyz appeal to the rear works.

Activity of the organization:

2. September 26 instigated the Kyrgyz of military age not to appear at the assembly points and took 9 Kirghiz.

3. On September 27, about 200 Kyrgyz in the tract "Uzun Agash" robbed the Kirghiz J. Kazygulov and S. Klyshpaev.

4. September 27 the Kyrgyz subject to appeal and record carriers of state bread Tleuzhan and Alimzhan Ermakombetovy, refused of transportation bread, said goodbye to the family, saying that they hardly would see each other again soon as they agreed to die at the meeting of elders rather than perform the highest command of the appeal".

"The policeman of section 4 camp 4 in Akmola with report as of Oct. 6 informed the bailiff of this camp, that according to data gathered by him between the villages Alekseevka, Radovskiy, Cosmo-Demyanskaya and Nikolsky gathered crowd of about 5000 Kyrgyz from different regions that being armed with handmade daggers and spears, as well as guns, ride around of auls Munchaktinskiy region, urging the Kyrgyz to join them, the dissenters were taken away by power; according to escaped from this gang of rioters Kirghiz Gaziz Galimzhanov, at the head of the mob were the Kyrgyz of Munchautinskiy region Saganay Kaylibaev, Tauken Akhmetov, Suleimen Altynbaev, Rakhimzhan Suleimenev, Karamsak Dzhumin, Kambar Ermekov, Kasim Anpergenev, Ahmet Bayazhanov, the people judge of the same region Bakey Nurmanov and the people judge of Karabulak region Cruz Janybekov.

On this occasion, I suggested court investigator Kalnitskiy to start preliminary investigation on the grounds of crime under p. 1 of 125 and p. 3 p. 1 and p. 1 p. 2 of 129 of Criminal Code".

Against the rebels 12 hundred cavalries, 11 reinforced infantries under the command of General Jagodin were sent. In spite of the heroism of the rebels, heavily armed Russian troops by the end of October 1916 suppressed the uprising in Akmola. Suppression of the uprising contributed to the fact that the rebels acted separately, there was no link between them.

Some rebels of Akmola and Atbasar regions in separate groups left in Torgai and joined the troops of Amangeldy. Some of them have acted on their own until the February Revolution of 1917.

Despite the fact that in most regions of Kazakhstan the uprising was subdued, as a whole, the national liberation movement in 1916 led to the growth of national consciousness.

It is worth to note that according to preliminary investigation results, those places were visited, the survey of the local residents, the search for suspects, but for the most part, cases were closed for lack of the suspects.