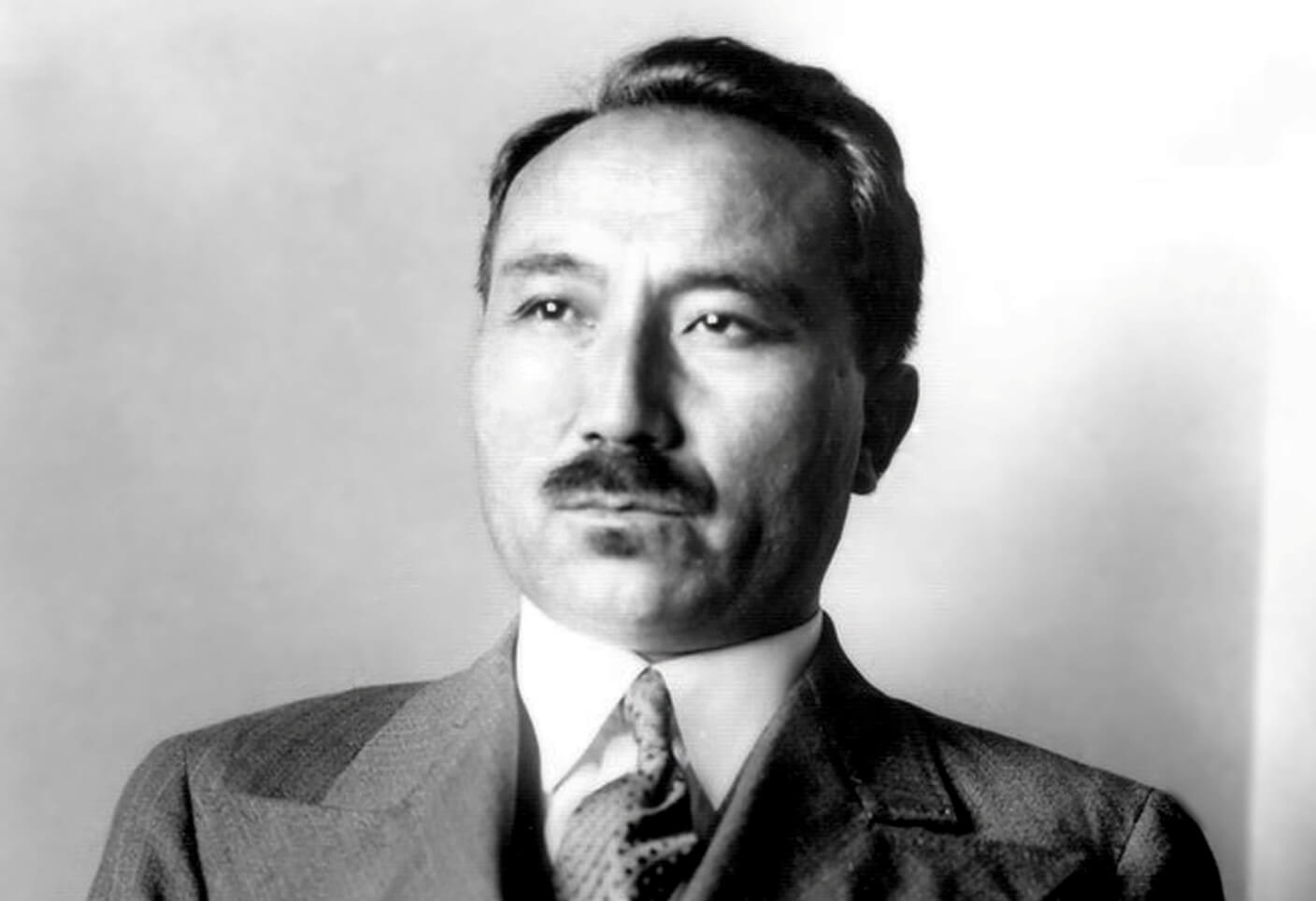 Today is the 122nd anniversary since the birth of the outstanding Kazakh writer, poet and public figure Saken Seifullin

Saken Seifullin was born on October 15, 1894 in Karaganda oblast Zhanaarka region. His real name is Sadvakas. However, everyone at his home called him Saken in gentle manners. He was born in a poor family. As Saken recalled, his father was a dombrist, loved hunting and Jamal his mother was a skilled narrator, expert in oral folk arts. Saken began to take lessons on reading and writing from aul mullah. At the age of 11 he began to study Russian grammar at Nildinskiy (Uspenskiy) mine school.

In 1908-1913 years Saken studied in Akmolinsk. At first it was Parochial School, later he went to two grades training school.

In 1913-1916 Saken Seifullin studied at Omsk Pedagogical Institute, which is often called the Siberian University. Omsk teachers' seminary was the center of the tumultuous political events. This had an impact on the future poet, and he became one of the active members of the student organization of the Kazakh Revolutionary Youth "Birlik" ("Unity").

In 1914 the young poet published his first collection of poems "Past Times", in which he reflects on the destiny of the Kazakh people, bitterly complains about the hard life of the poor and decrepit patriarchal customs.

In 1916 graduated from Omsk teacher’s seminary, Saken worked as a school teacher in the aul Zhinishke. In March 1917, a young poet, full of revolutionary views, moved to Akmolinsk, led the youth organization "Zhas Kazakh", published revolutionary-democratic newspaper "Tіrshіlіk (Life)", he has been elected a member of the Presidium of the Soviet of Workers 'and Peasants' Deputies and the Commissioner of Education.

In May 1918, as a result of the rebellion in Akmolinsk Soviet regime was overthrown and the leaders of the Council, including S.Seifullin were captured. In late autumn 1918, forty-degree frost, they were convoyed in Petropavlovsk, where they were in the "death trains" within 47 days of being taken to Omsk concentration camp. Captivity, extreme deprivation and suffering in the prisons of Akmolinsk and Petropavlovsk, torments by the Whites writer described in the "Thorny path". "... Our train came thundering to the east, in Siberia depth. Deep snow covered all around. Buran did not cease. Birch, half covered with snow, rustling and swinging in the wind bent its crowns as if sent the last "farewell" to those who were going to meet their death. The door of the wagon now was closed firmly all the time. Bread was given to us every second or third day, a quarter pound per day for a person. We were given a little water. Firewood or coal had to be taken in locomotives standing on the road. Machinists, fortunately for us, did not spare the fuel. We took it more and sat all the time near hot stove. Ash was spread on the ground.

Hungry, we sat close to the stove, as if we were taking its warmth. Because of heat our mouths were dry, and was tormented by thirst. When the train stops, knocking on the door, we asked for water, but the guards were deaf to our requests. Our eyes fell to the dried bones as tensioned belt, stuck skin. Faces and hands have long forgotten about water. In the morning, when we were taken to refresh ourselves we hastily rubbed our hands and faces with cold snow. Faces blackened by coal dust after rubbing became mottled. We slept on the floor near the stove, board beds were almost all burned, except those on which the patients were lying. Day by day the number of patients was increasing - in both wagons, "- later would write Seifullin.

Saken Seifullin survived because of break-out in March 1919. In 1920, when the Kazakh Autonomous Republic was created, Seifullin was elected a member of the Presidium of the CEC of Kazakhstan. In 1922 he was appointed Deputy People's Commissar for Education of the Republic, and at the III Congress of Soviets - the Chairman of the Council of People's Commissars of Kazakhstan. Saken confirmed that Kazakhstan would not prosper while the Kazakh language was not used in all state institutions. Without raising the language status, it is impossible to raise the status of the people. On June 9, 1923, he published an article entitled "Kense іsterіn Kazakh tіlіnde zhurgіzu Kerek" ("Office affairs should be conducted in the Kazakh language").

In his articles, he looked after the interests of the language. For this he used the newspaper "Enbekshi Kazakh", which he directed. On November 22, 1923 the CEC adopted a decree, according to which since July 1924 office affairs should be conducted in the Kazakh language. It is clearly Saken’s merit. On December 1926 Saken married, his wife was Gulbahram Batyrbekova. Marriage took place in Kyzylorda. From that day Gulbaram became not only his beloved wife, but his friend and assistant. They had two children: daughter Laura and son Ayan. Unfortunately, the children died at an early age. In 1927-1937 Seifullin was a director of several universities, served as chief editor of the newspaper "Enbekshi Kazakh" and the magazine "Literary Front", created Kazakhstan Writers Union, did academic and translation works, and so on.

The most important thing is that he never stopped writing. He published a collection of poems "On the Waves of Life" (1928), "Kokshetau" (1929), published a number of poems "Albatros" (1933), "Kyzyl-at" ("Red Horse", 1934), wrote a lot of stories. Name of Saken Seifullin is closely associated with Akmolinsk, where he studied, had an active position in social and political life, was arrested, participated in the establishment of Soviet power, started a family.

In March 1931, the writer completed his work on the first book on the history of Kazakh folklore. And he was drawn to the still unessayed genres. He began writing a satirical novel "Our way of life," combined writing poems "Kyzyl-at" and "Albatross". July 12, 1936 - a big day in the biography of the writer. Kazakhstan celebrated the 20th anniversary of the literary activity of the national writer Saken Seifullin. Anniversary celebrant hardly had time to receive and read the congratulatory telegrams. Kazakh CEC’s Decree literally stunned the writer: "Decision of the Central Executive Committee of Kazakhstan in connection with the 20th anniversary of creative activity of Saken Seifullin at the literary front: 1. Assign the name of Saken Seifullin to Semipalatinsk Teachers' Institute, Kazakh high school, Alma-Ata station, Uchilishchnaya street in Akmolinsk, Naberezhnaya street in Kokchetav; 2. Assign the name of Saken Seifullin to the passing place number 11, where Dzhezkazgan branch of the Karaganda-Balkhash railway starts; 3. Give a car for Seifullin personal use".

In 1936 as a social leader he was invited in Moscow for celebration the 100th anniversary since A.S. Pushkin’s birth. The same year he became the first Kazakh writer who was awarded the Order of the Red Banner of Labor. Year 1937 started. Saken Seifullin was arrested in Alma-Ata, his wife Gulbahram and his son Ayan were forced to return under escort to Akmolinsk. The child could not stand it.

Saken Seifullin was shot as the "enemy of the people" in one of the NKVD prison in Almaty, on April 25, 1938 at 16:40. Thus, in one moment, the Kazakh writer and poet, innovator, educator, social activist’s life was ended. The Soviet regime and its ideals, in which he believed, destroyed him.