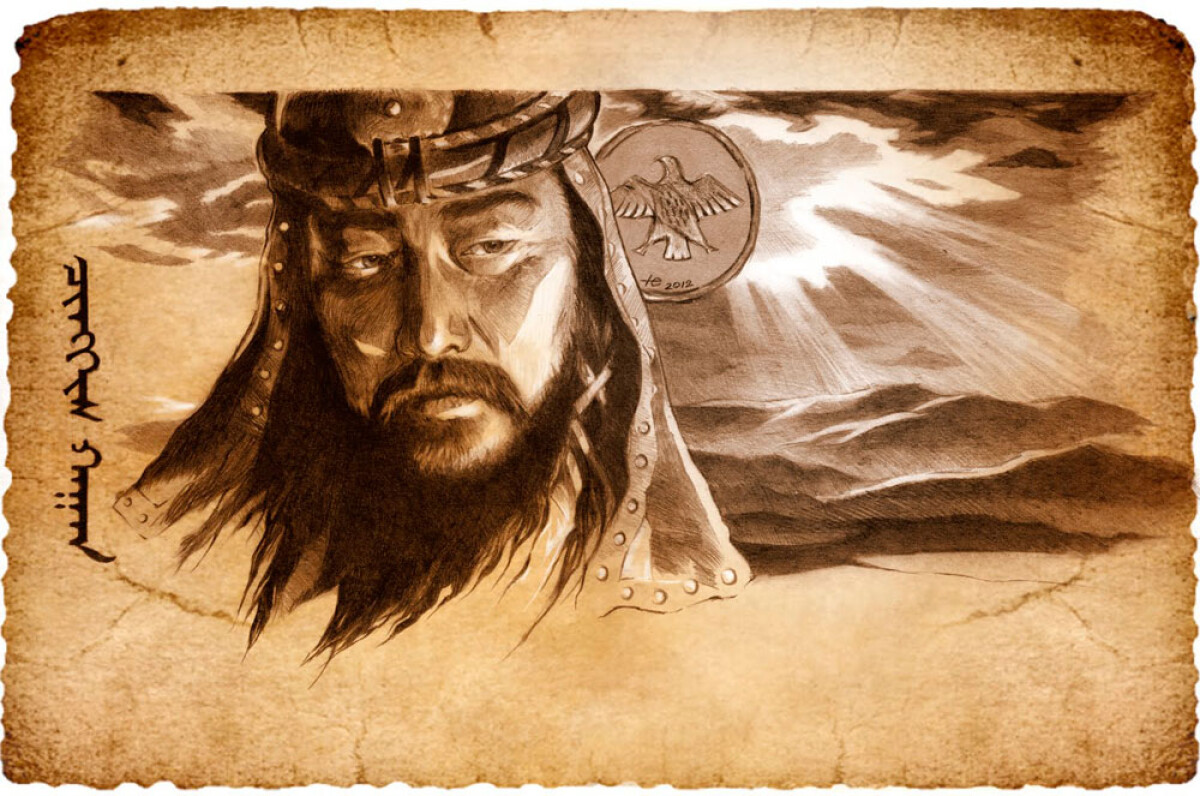 It is not known how a term ‘Tanir’ of ancient Sumerians, who called ‘Sak gig’ themselves and ancestors of ancient Turks originated.

Genghis Khan appreciated spiritual values of the agrarian period of human history very much. As it is known, four great monotheistic religions were created during that period. Ten Commandments as a formula of humanity from self-destruction were formed at that time. Genghis Khan practiced Tengrism and was dedicated monotheist. The very beginning of Tengrism was the recognition of one God — Creator of all things including mankind. The nomads considered God as the Creator, Absolute Sovereign and Enforcer of the Universe — ‘Kok Taniri’. ‘Kok’ is the endless blue sky, the infinite Universe, ‘the upper world’, Place of God. ‘Taniri’ (‘Tengri’) is impossible to learn, but its presence is felt always and everywhere.

It is not known how a term ‘Tanir’ of ancient Sumerians, who called ‘Sak gig’ themselves and ancestors of ancient Turks originated. It is possible, that it was formed from two terms by associative matching on some subconscious —intuitive level. ‘Таң’ is the dawn, light, sunrise. ‘Тән’ is a body, substance. ‘Тәң’ is mutual transition of ‘Таң’ to ‘Тән’ and conversely, transition from energy to substance and substance to energy. ‘Tanir’ is the causative essence of creative and destructive processes of energy and substance interaction. ‘Tanir’ is not corporeal, not material phenomenon, it is invisible, all-pervading, omniscient and all-pre-determining energy power and universal programmer.

A feature of ‘Kok Taniri’ as the universal creative essence shows that experts and true followers of ‘Yassy’ theory could accept only one religion, namely Islam, because Allah is also associated with unknown, incognoscible creative energy force unlike other monotheistic religions allowing anthropomorphism. True Tengrism followers would never agree with the idea of anthropomorphism of God. It is not coincidence that many proto-Kazakh tribes confessed Nestorian Christianity, which does not allow image of God in human disguise. Kazakh people who adopted Islam, call God not just ‘Alla’ and say ‘Alla Taniri’ about him, meaning that term ‘Allah’ coincides with the term ‘Tanir’.

Genghis Khan was very tolerant man because he was a true follower of Tengrism. The principle of monotheism, oneness of God had decisive meaning for him. If God — ‘Tanir’ is one, all ‘spirituality paths’ invariably lead to him, he believed.

Recognizing the uniqueness of God, you should not assume that the way of worship is only one. Expression forms of faith in God may be different. The main thing is that all people believe in one God and do not argue one issue ‘which faith is better’. Genghis Khan believed that it was the main ideological support of universal unity.

If that was the case, Genghis Khan believed that the humanity was obliged to strive for universal unity: ‘There is one God in the sky, one Kagan on the land’.

But it was not easy to achieve such unity. The main barriers were unmeasured greed and ambition of the human race. According to Genghis Khan, only selfless people who are faithful to the principle ‘Life is more expensive than wealth, honour is more expensive than life’ could unite the mankind. Only true ‘ar-isi’ just like him were able to serve faithfully to ‘aktyk’ — ‘cause of justice’. Genghis Khan knew that unity was inapproachable without justice. Kagan followed the ancient imperative: ‘Leader serves to ale, ale serves to leader’, which means that a ruler elected at the Kurultay, devotes his whole life to selfless service to people and people who elected a ruler must obey hos orders and discipline and demand the same from their sons and noyans, who headed autonomous societies and tribal communities.

That rule embodied the principle of a higher justice of Eurasians’ social life for thousands years, but after the collapse of the Great Turkic Khanate it became smaller and narrowed, and was implemented only at the tribal level. Genghis Khan revived that great principle of ‘democratic centralism’ to a great extent for the first five centuries of steppe anarchy and separatism of ‘post-Bumyn period’. He said that justice could not realize without using force. Genghis Khan made sure that greedy and power-hungry people skillfully used Ten Commandments as a ‘shield’ to do their dirty job.