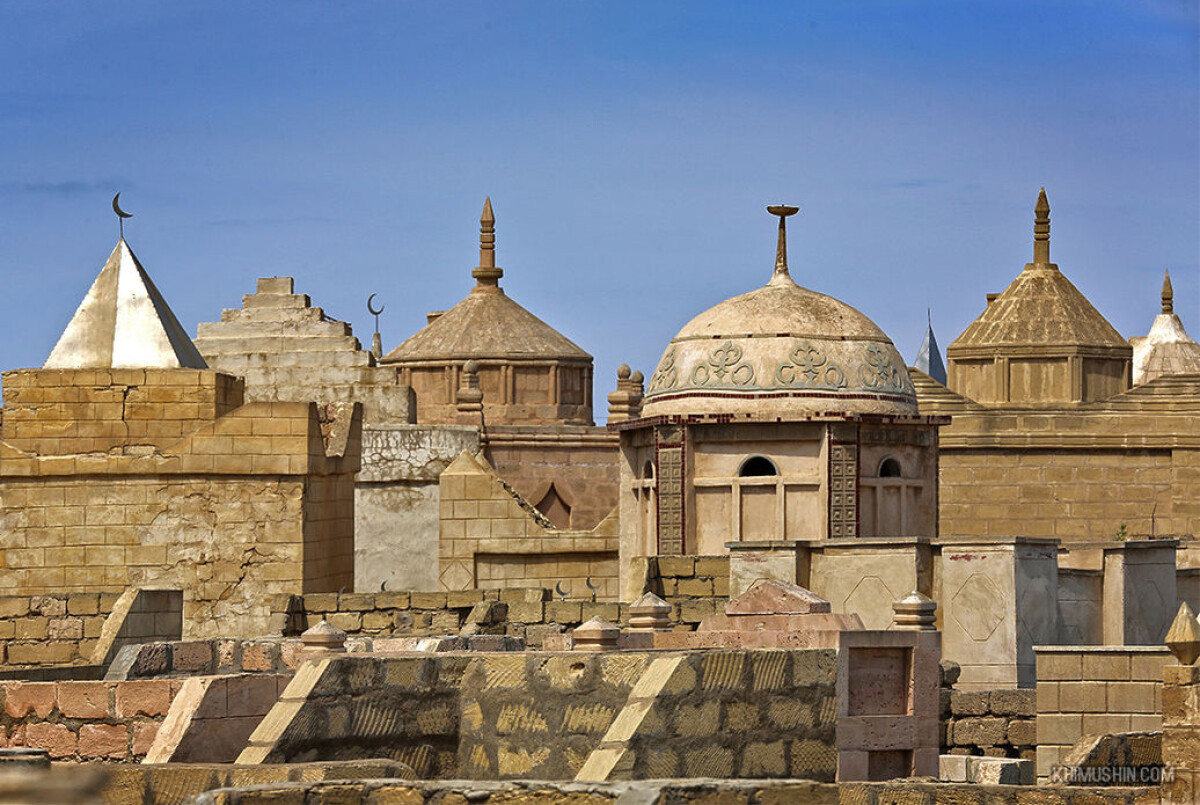 Kazakhstan – not only boundless steppes and distant region of Mangistau at the west of the country, it is absolutely another amazing world, rich in its history.
Mangistau (in the Soviet time bearing the name the peninsula Myngyshlak) — the region of Western Kazakhstan, washed from the west by waters of the Caspian sea, and from the east practically distant from the remaining part of the country by the territory of Uzbekistan. From the south of Mangistau also borders with Turkmenia. This region is rich in history — two thirds of monuments of the whole Kazakhstan is located exactly here. 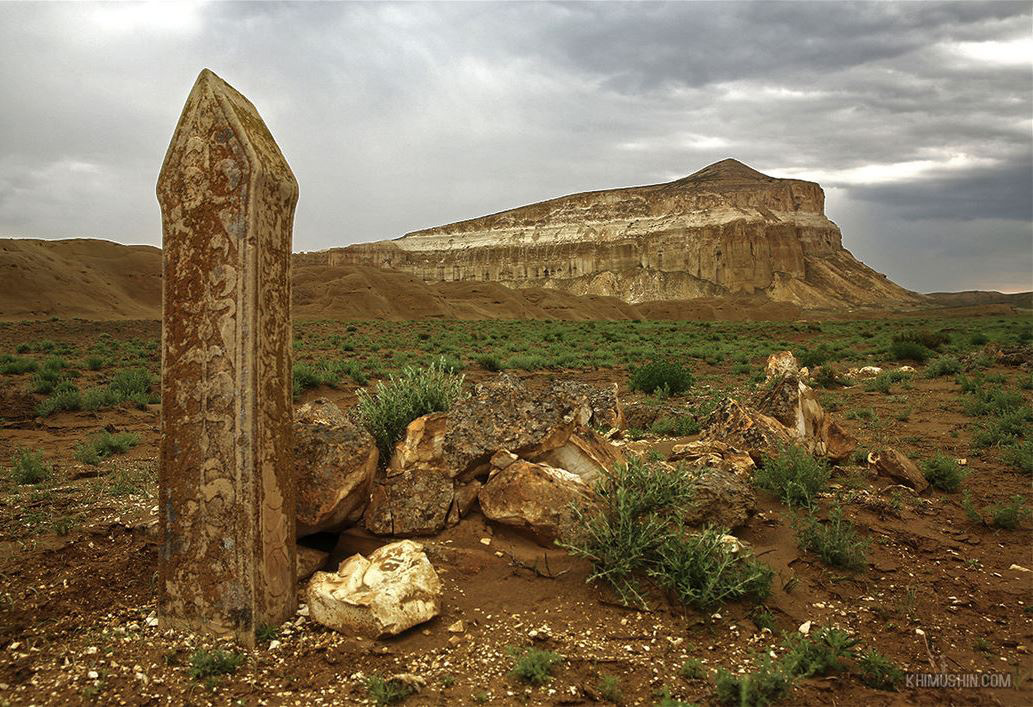 However, the history of the land has not been fully studied. Archeological findings confirm that in the deep ancient times through Mangistau went the Great Silken way from ancient Khorezm to Khazariya, Volzhskaya Bulgaria, Persia. On the ways of caravans, counting thousands of camels, located the multiple caravan-sarays and the things are humming. The later Mongol raid wiped out the local settlements and the land decayed. A half of Mangishlak — the bottom of the receded Caspian sea. The abundance in the local lands of the shell rock allowed to the people of various tribes to eternaliz its track in the kind of petroglyths and ancient burials. More modern necropolises (cemeteries) or the cities of the dead, as Kazakhs call them, look not like in the ancient times. For the last 100 years the whole cities rose, where almost each grave had its dome.

The interesting peculiarity of Mangistau region is that far in the mountains, in the hallows of caves local people since ancient times raised mosques. The appearance of each of them (the oldest supposedly dates back to the VII century) has its beautiful legend. Going inside and seeing at the light of candles the ancient Arabic manuscripts, actually you feel a special feeling. 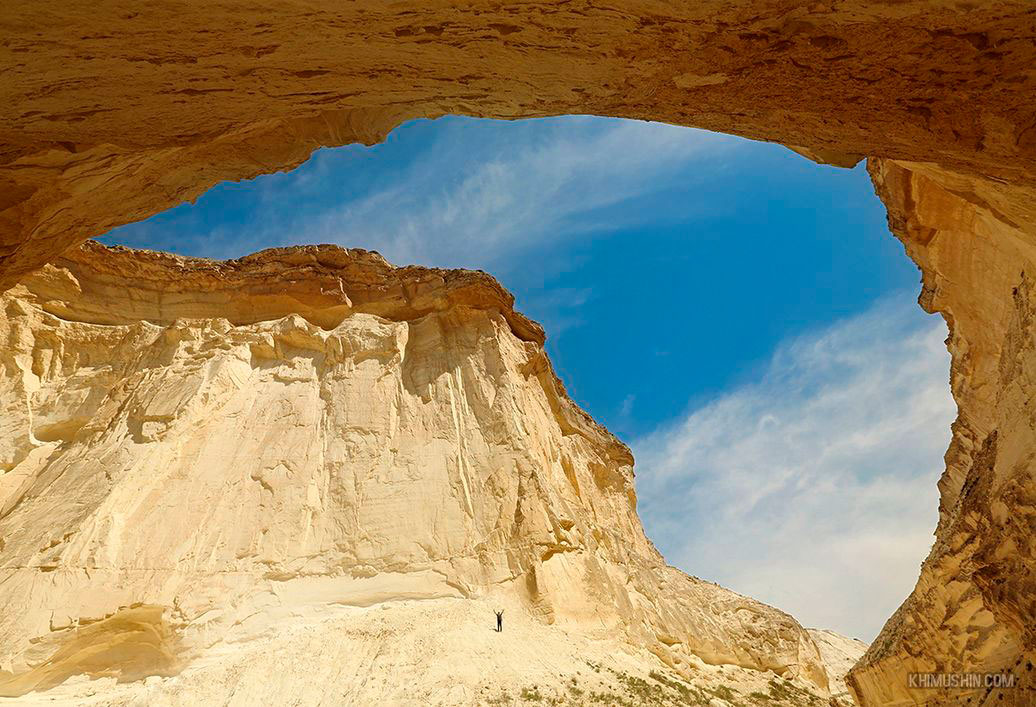 But Mangistau is interesting not only with its history, but also with its beautiful legend. The most part of interesting places of the region is still hard to reach. To get to the distant places is possible only on the steppes by the offroader. For three weeks, that I went across the land of Mangistau, I was able to comprise only the part of all those interesting things that save this marvelous land. One of such places — a little known canyon in the region of the Tauchik settlement, there are tens, if not hundreds of them in Mangistau.

“It is interesting whether the deserts similar to what is represented by the reading of the Arabic fairy-tales?” — I thought and set off for search. 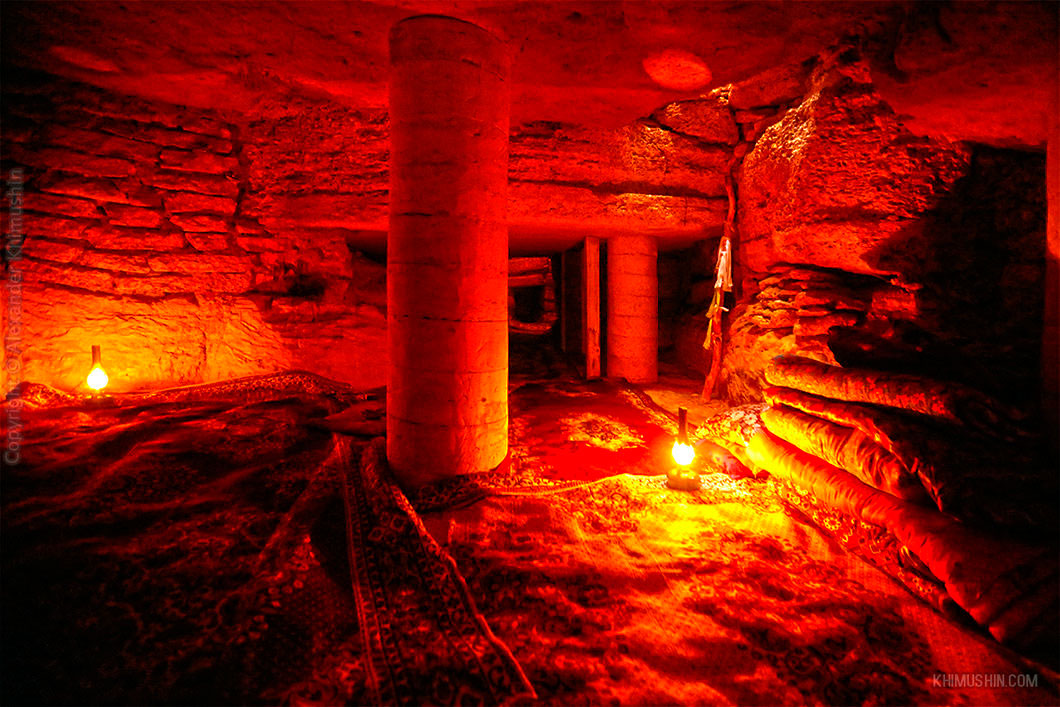 On topographical maps some places were marked as sand dunes which, in fact, looked as the usual steppe mixed with sand. But at the outskirts of not remarkable distant settlement Senek I could see the real barkhans of impressive sizes. Having known form the local people how to reach closer and by rising the slope I have been wandering through the endless sands for long. It was very windy, sand clogged into the folds of clothes and screeched on the teeth, sometimes it seemed that a little more and wind will strike down.

Photographs know that usually in these conditions it is better not to take out the camera, but the seduction to feature the beauty of the nature turned out to be stronger.

Another, as it seems, the most memorable and most hard-to-get place of the region — reserved cavity of saline land of Karyn-Zharyk, which is located practically at the boundary with Turkmenia. The road there, more exactly, not the road, but just GPS-direction on steppe after May rain is sometimes impassable even by the offroader. But, after going that way and, at last, occurring after all hardships at the place, I had the feeling of unreality of the current things. Lonely standing mountains in the middle of the mirror smooth surface of the saline lake. Neither a single car up to tens of kilometers, not single track of human foot on the mirror clayey surface. Only the boundary cordon stretching for 5 km reminded that life “on Mars” exists. 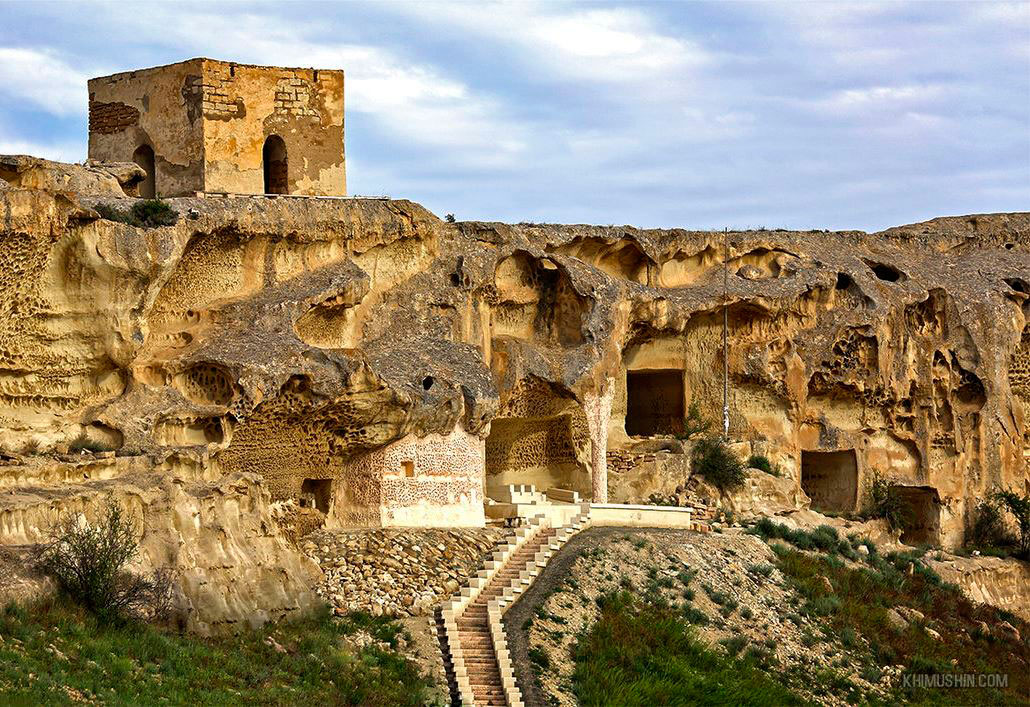 The academician B. A. Fedorovich — a specialist on deserts did not stop to admire the landscapes of Mangistau. He wrote: “If you want to image all the types of the deserts of the globe, about black, cliffy, bare mountains, about shining with whiteness or mild-rosy “stoney cities” with intricate giant towers, obelisk if you want to see all the forms of the relief of sands and all the types of saline lands, then it is impossible to choose better place than Mangyshlak. In this country on the small space and in reserved jewelry-box the whole arsenal is gathered”.

About saint for the local people mountain Sherkala the participant of expedition of 1851 Bronislav Zalesskiy wrote: “Rising alone on the even surface it draws attention by its form. The margins of the mountain with the height of 700 feet are rising above the plain. From afar Sherkala is similar to the Rome Pantheon. By coming closer you can differentiate the pieces of walls which fell and further there are the separate columns on which the destroyed by time statues, so unusual forms stand”. Everybody who was at these places also was surprised with the great number of huge stone balls of the correct form by diameter of 2-3 m, as if scattered by someone around on the field. Certainly, it is one thing to admire by these landscapes only for several days and completely another thing — to contemplate them for years not on one’s will.

Taras Shevchenko, deprived the possibility to write and draw, who lived here at the tsarist regime for long 10 years in exile (his name today is eternalized in the name of Fort-Shevchenko city) wrote: “Real desert! Only sand and stone; if only little grass, if only little wood — there is nothing here. It is not even possible to see the proper mountain — just nonsense! You see and see and feel sad — just hang yourself but there is nothing to hang yourself with!” Landscapes of the region are, certainly, lifeless — often appears the feeling that you are somewhere on Mars and now “round the corner” will appear the characters from “Star Wars”. The most impressive one from such places — the peaks of Boszhira, risisng on white lifeless plain. The fame about them reached Japan — in the district of peaks located within the distance of 200 km from the nearest residential place, I suddenly saw the group of the Japanese who paid the money to one of travel’s agencies in order to reach there. 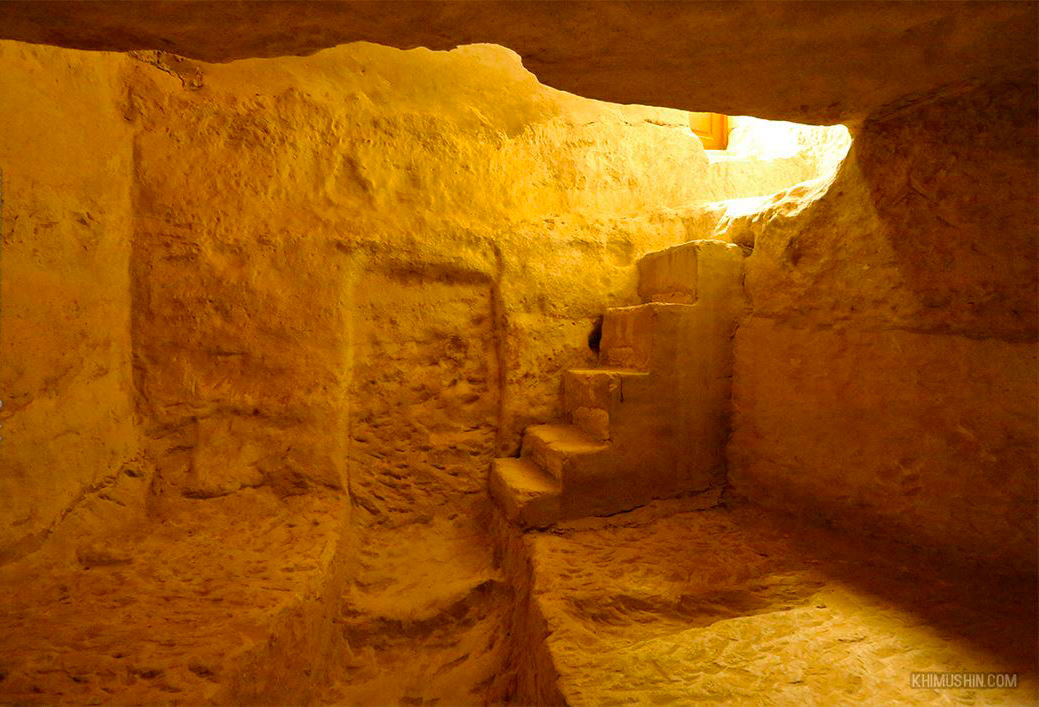 From the height of the mountain plateau Usturt the views on Boszhiru are breath-taking! I will allow myself not to agree with Shevchenko — although nature of Mangistau is severe, anyway it is surprisingly versatile: from yellow sand dunes of desert to turquoise waves of the Caspian sea, from deep canyons and cliffs to green carpets of endless steppes. Exactly here, at Mangishlak the Karagie (132 m below the sea level) is situated.

However, one of the most breath-taking discoveries at Mangistau personally for me occurred to be the night sky. It probably can be compared with the spangled with stars night sky of the Himalayas. Whether it is the seashore of the Caspian sea, in saline lands, steppes or cliffy mountains, everywhere, where you had to stay for night for these three weeks, I wanted to spend nights under this starry sky nights long in order to soak up at least the part of all that unearthly beauty.

Konstantin Paustovskiy visiting in due time Mangishlak wrote: “Nowhere I saw such grandiose star rainfall and such dazzling shine of planets. It was so bright, that at nights it seemed that as if planets fly to us from the space, fly to one point of the globe — to the dead peninsula Mangishlak”. The seashore of the Caspian sea also pleasantly surprised with its primevalness and beautiful bays with the purest turquoise water. Isn’t that the Caribbean? Just think, it is Kazakhstan!!! I have never earlier thought that it is possible. And if at the health centers of Chernomor seashore in the season there is barely room to move then at the most beautiful seashore of the Caspian sea between Fort-Shevchenko and Aktau there is no resort-hotel-sanatorium. As a whole, if you love the auto-tourism and you are not only frightened but also rejoiced by the romantics in the tent at the white beach and starry nights by the fire to guitar, then you should come here! The only thing — you should also not be confused by the presence of certain amount of floating snakes at the seashore cliffs...

One of them I caught just at the moment when she took from water the fish and right in front of eyes swallowed the prey in one piece. Besides the snakes at Mangishlak in wild nature one can simply and rather often meet turtles. At the cemeteries (for some reason exactly there) I could see not once the hares. From domestic (grazing by themselves for kilometers in the district and even independently wandering around the settlements). The travelling around Mangistau is not the autobus tour around Europe. However, having visited this amazing region, I did not regret “about the accomplished thing”. On the contrary, difficulties only added adrenalin and sense of adventure. 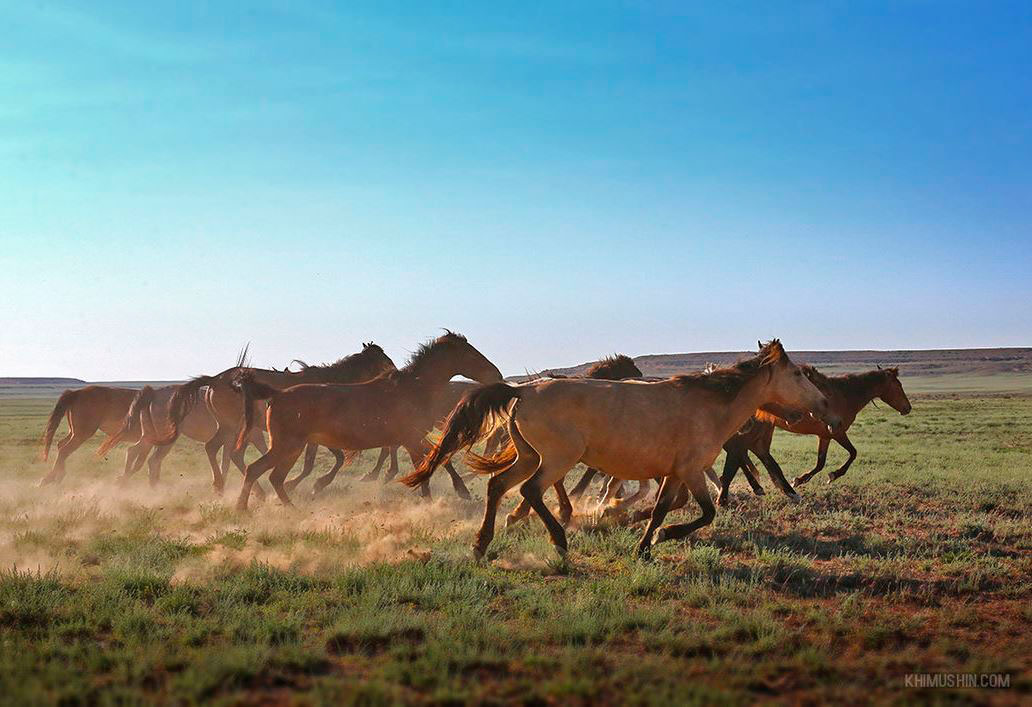 Taking into account that Kazakhstan — neighbouring and very friendly country (in the hospitality you can not refuse to Kazakhs), to all of them in whom lives the spirit of adventures, I without a shadow of a doubt recommend to visit Mangistau! It seems to me that it is only the issue of time, when there thousands of Western tourists dash. So, hurry up!