The Kazakhs have a deep history that is embodied in monuments placed in different corners of the world, in particular in European, Asian and African countries

The Kazakhs have a deep history that is embodied in monuments placed in different corners of the world, in particular in European, Asian and African countries

Most of them were erected after Kazakhstan’s independence and reflect the worldview and culture of the Kazakhs. Read about the most interesting of them below. 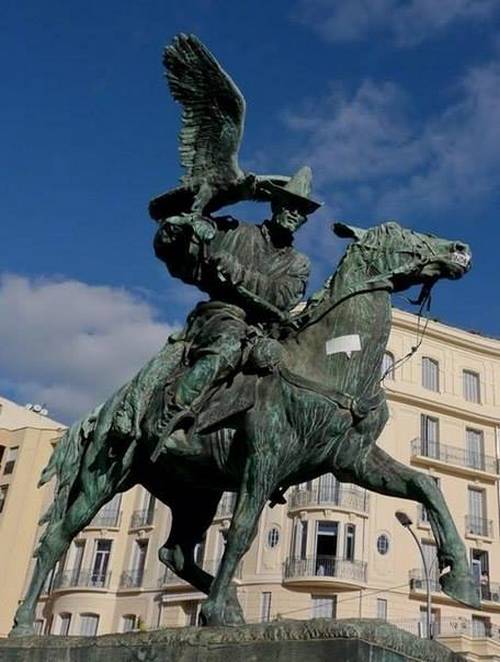 Statue of a Kyrgyz with eagle is placed in the Botanical Garden in Menton, French Riviera. The author is Yevgeny Lansere (1848-1886). He was a soldier of the army of Napoleon Bonaparte who remained in Russia. The Russian Emperor Alexander III sent the sculpture to France as a gift.

For 38 years of his life, Yevgeny Lansere created around 400 works. Most of them depict the life of the peoples of Northern Caucasus and Central Asia. 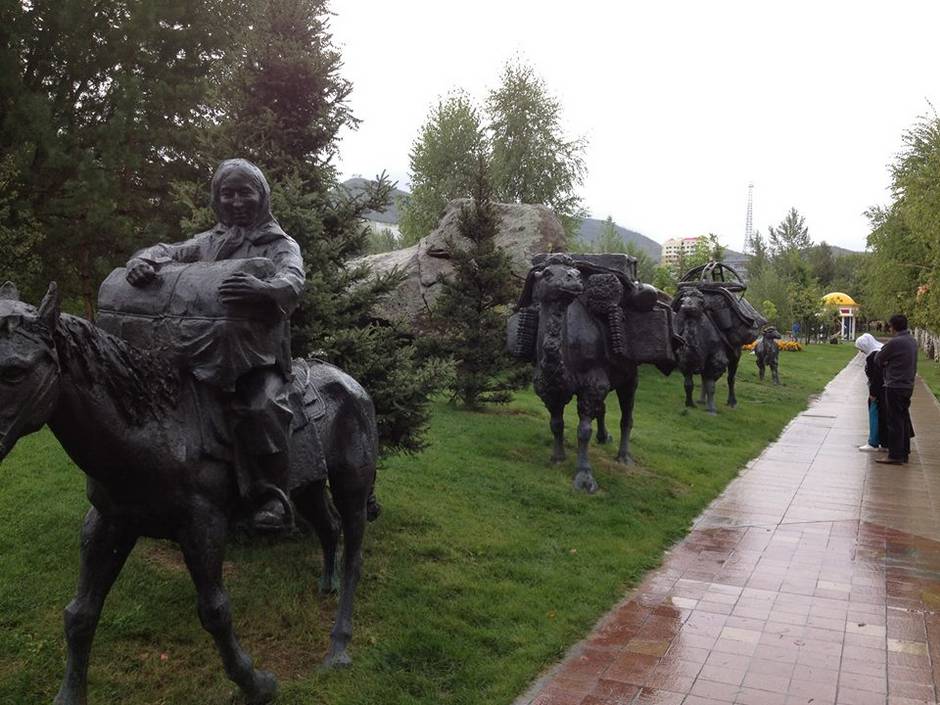 This is a particular monument on the territory of the modern city of Altai. It is placed on the bank of the Kyran River and tells about the life of the Kazakhs. 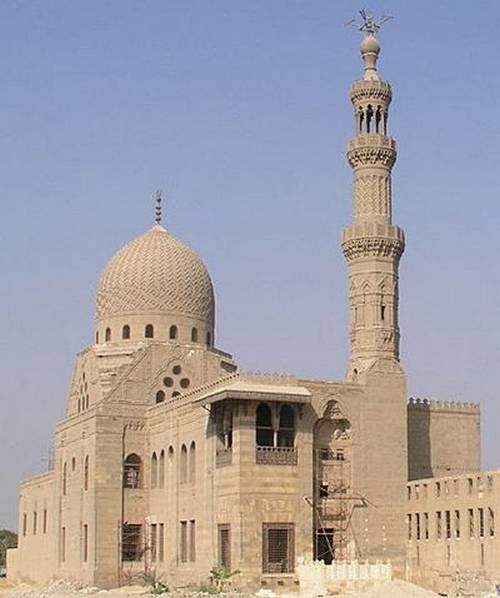 Beibars was talented military commander and wise leader who erected high buildings, mosques, fortresses and fortifications. Some of them have preserved well until nowadays and are the pride of the Kazakh nation. That is what President Nazarbayev told about the great man in one of his speeches:

"Many historians left written evidence of the dramatic life of our great ancestor Sultan Beibars. He was the person who grew from a slave into the supreme ruler thanks to his courage and intellect. He was the person who skilfully ruling such giant country as Egypt protected it from Mongolian conquerors and starters of the Great Crusades and thus maintained independence, uniqueness and integrity of the Arab world. He was a local Bersh tribesman captured in childhood and brought to another country from coasts of Atyrau... Several years ago during my trip to Egypt I visited a mosque built by Beibars, made a pray and saw with my own eyes how the Arabs revered everything related to the memory of our Great Ancestor." 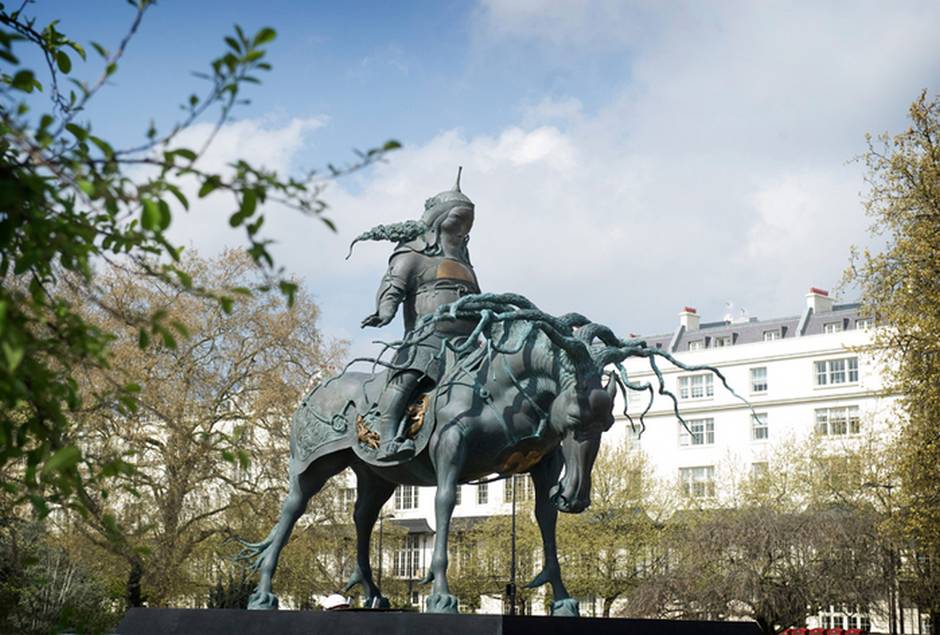 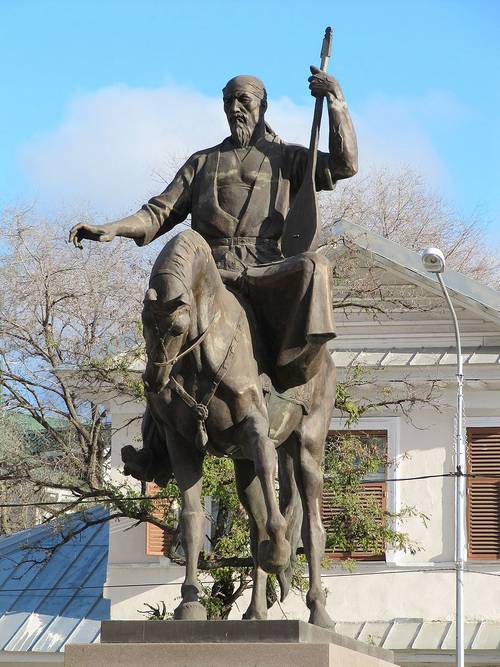 The monument to Kurmangazy, a famous dombyra player and composer, is located in Astrakhan, Russia. The ceremony of unveiling was conducted on 13 December 2008. The authors are Yedige Rakhmanov and Tokhtarbek Rakhiyev. 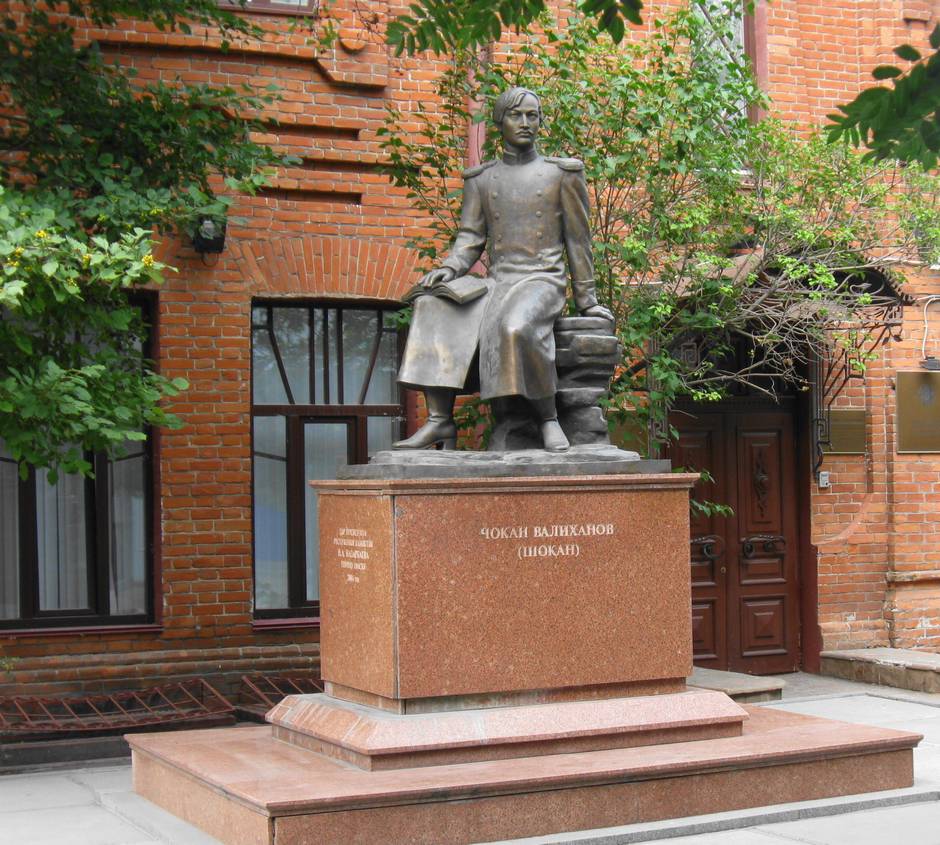 The monument was sent to the city of Omsk as a gift from the President Nursultan Nazarbayev. Sculptor Azat Bayarlin represented Chokan who sits with an opened book in his hands. The monument is placed on the street with the same name. 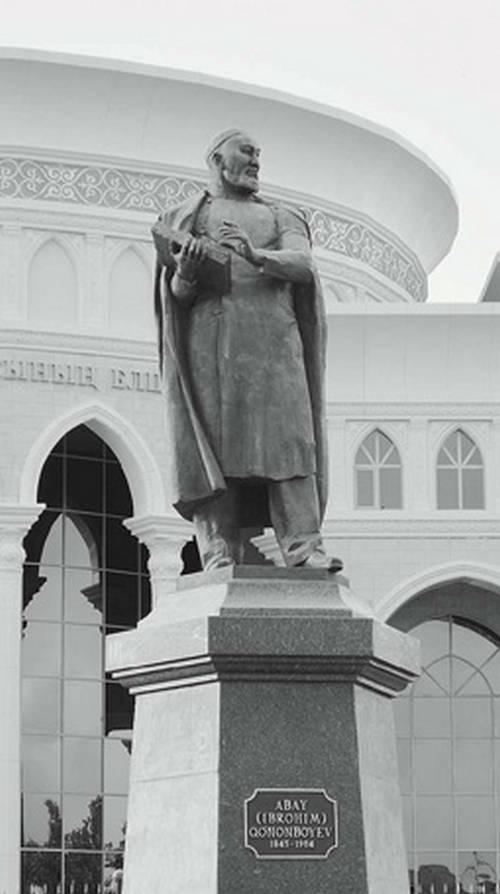 Monuments to Abai are placed in several countries: at Moscow’s Chistye Prudy central boulevard (Russia), on Astana Street in Budapest (Hungary), Chaoyang Park in Beijing (China), in front of the building of the Embassy of Kazakhstan in Tashkent (Uzbekistan), on the avenue of the National Library of Iran in Tehran (Iran). 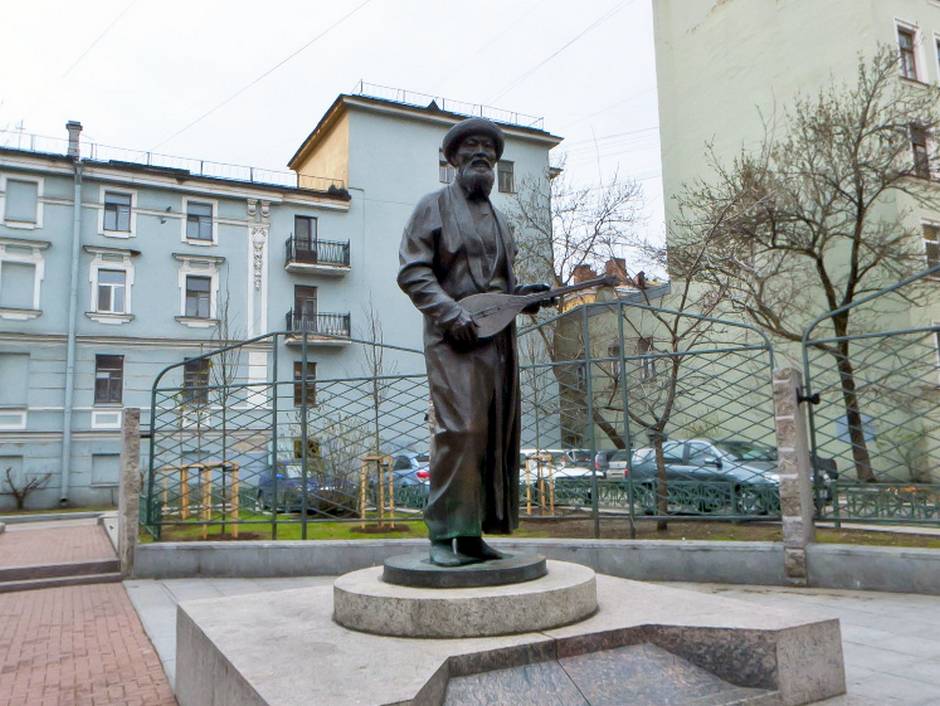 The monument to Zhambyl, an author of the famous poem People of Leningrad, My Children, is located in Saint Petersburg on the street with the same name. The authors are Felix Romanovsky and Valentin Sveshnikov. 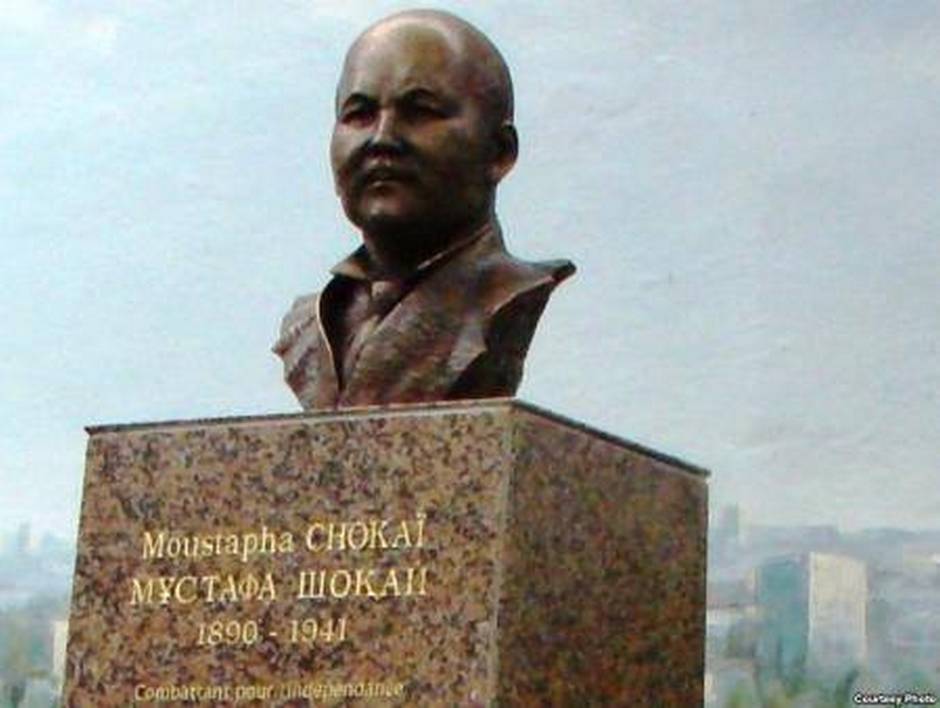 The memorial plaque to Mustafa Shokai is placed in Nogent-sur-Marne, suburb of Paris. It presents Zhambyl’s brief biography and information on Kazakhstan’s history and geography. According to the staff of the municipal museum, being an example of respect to human values and memory of national heroes the monument contributes to the establishment of closer relations between the Kazakh and French nations. 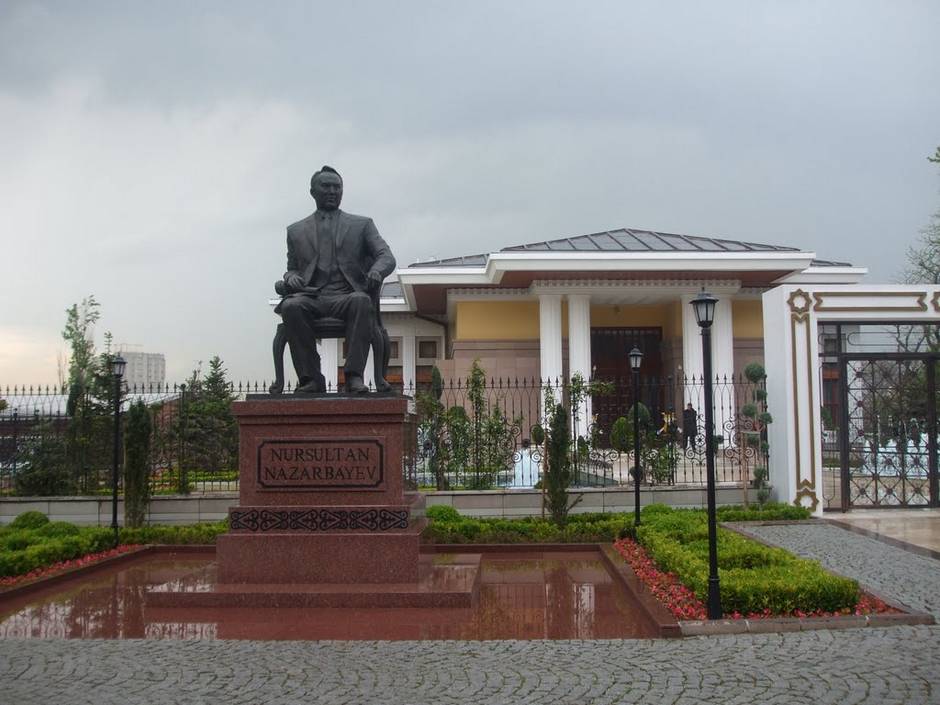 The monument to Nursultan Nazarbayev was unveiled in Ankara, the Turkish capital, in 2010 as a symbol of respect and recognition of his activity for the benefit of all Turkic peoples. The author of the monument is Gursel Chataltepe, a famous Turkish sculptor. The height of the monument is 5 m and the height of its marble pedestal — 2.5 m.