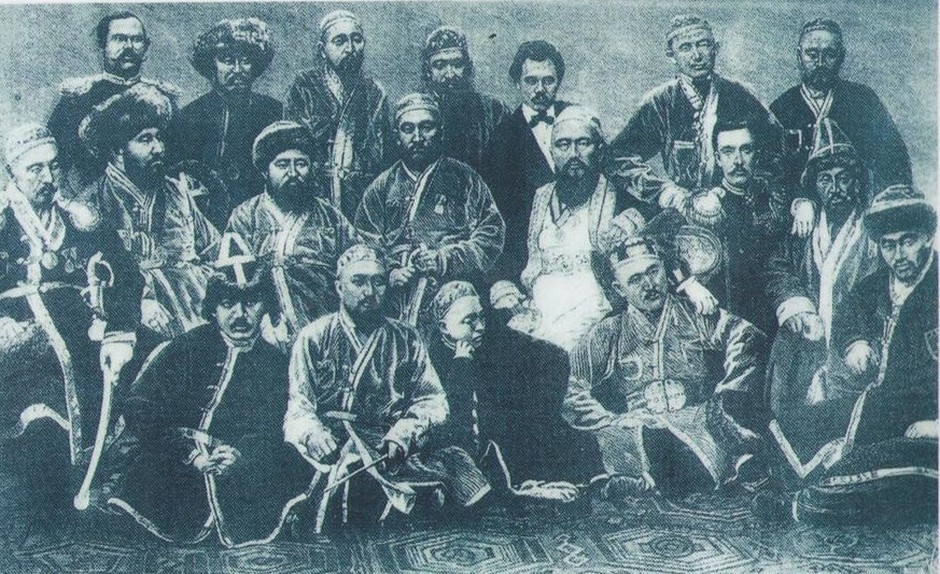 The program article of Head of State N.A. Nazarbayev "Looking into the future: modernization of public consciousness" caused a huge resonance in the Kazakh society, including professional historians and scholars of the humanitarian sphere.

In this connection, today on the basis of the ENU named after L.N. Gumilyov National Congress of Historians held its regular IV Congress "MODERNIZATION OF PUBLIC CONSCIOUSNESS AND NEW TASKS OF HISTORICAL SCIENCE", in the work of which prominent representatives of the history and humanitarian science and education of the republic from all regions of Kazakhstan, deputies of the Parliament of RK, as well as foreign guests took part. Delegations of museums, archives, general schools, military, veteran organizations were also represented.

During the work of the Congress books were presented in the framework of the implementation of the presidential program "Tugan Zher" "Astana: past and present" (Z. Kabuldinov), "Sarzhal" (B. Temirov), "Alash movement" in 2 volumes (M. Koigeldiyev).

The main purpose of the Congress is to support the new fateful initiatives of the Head of State in the field of modernization of public consciousness and spiritual revival, discussion of topical problems of historical science and education, a new level of work of museums and archives, and improvement of the content of the state of school and university textbooks.

The participants of the Congress note that in the conditions of modern development, when the importance of fundamental humanitarian education, the unity of education and science is growing, the role of historical science in society is rapidly growing. Kazakhstan is moving towards the realization of the set goals for the entry of our country into the "thirty" of the best countries of the world.

A leader of the nation, Nursultan Nazarbayev, leads our society along the path of modernizing consciousness and reviving the spirit of the nation. In his program article, the President of the country N.A. Nazarbayev clearly defined six main directions for modernizing our consciousness: competitiveness, pragmatism, preservation of national identity, cult of knowledge, evolutionary rather than revolutionary development of Kazakhstan and openness of consciousness.

In the same vein, the Head of State proposed six concrete projects - programs aimed at implementing the indicated directions for the sake of our people's future: the gradual transition of the Kazakh language into Latin script, the fateful projects "New Humanitarian Knowledge", "100 New Textbooks", "Tugan Zher", "Spiritual shrines of Kazakhstan", "Modern Kazakhstan culture in the global world", "100 new persons of Kazakhstan".

The participants of the Congress agreed on a common scientific and practical-oriented position in understanding the main directions for the practical implementation of the tasks of modernizing public consciousness, spiritual revival of the nation, strengthening local history work, developing and improving national historical science and education.

Use of materials for publication, commercial use, or distribution requires written or oral permission from the Board of Editors or the author. Hyperlink to Qazaqstan tarihy portal is necessary. All rights reserved by the Law RK “On author’s rights and related rights”. To request authorization email to mail@e-history.kz or call to 8 (7172) 57 60 13 (in - 1163)
Қазақша Русский English
MOST READ
Month Year
Kazakh historical drama Tomiris premiered in Istanbul
ALASH IDEA IS THE PROTECTION OF KAZAKH STATEHOOD
Stolypin about the worries and hopes of immigrants to the Kazakh steppes
A tireless explorer of the Kazakh land
SWITCHING TO THE LATIN ALPHABET – UNITE ALL KAZAKH PEOPLE
Kunaev Dinmukhamed Akhmedovich
People who eat horses will kill you
Kazakhstan's participation in the Winter Olympics has a long history
Rebooting a field of science and education
Recorded history of Kazakhstan. Part 1
Historical Dates on the Bosphorus
Recorded history of Kazakhstan. Part 2
Materials on theme
Remembering Turar Ryskulov
In Kostanay region continues to study of mysterious houses
Esugay-Bagatur
A Hard Lot