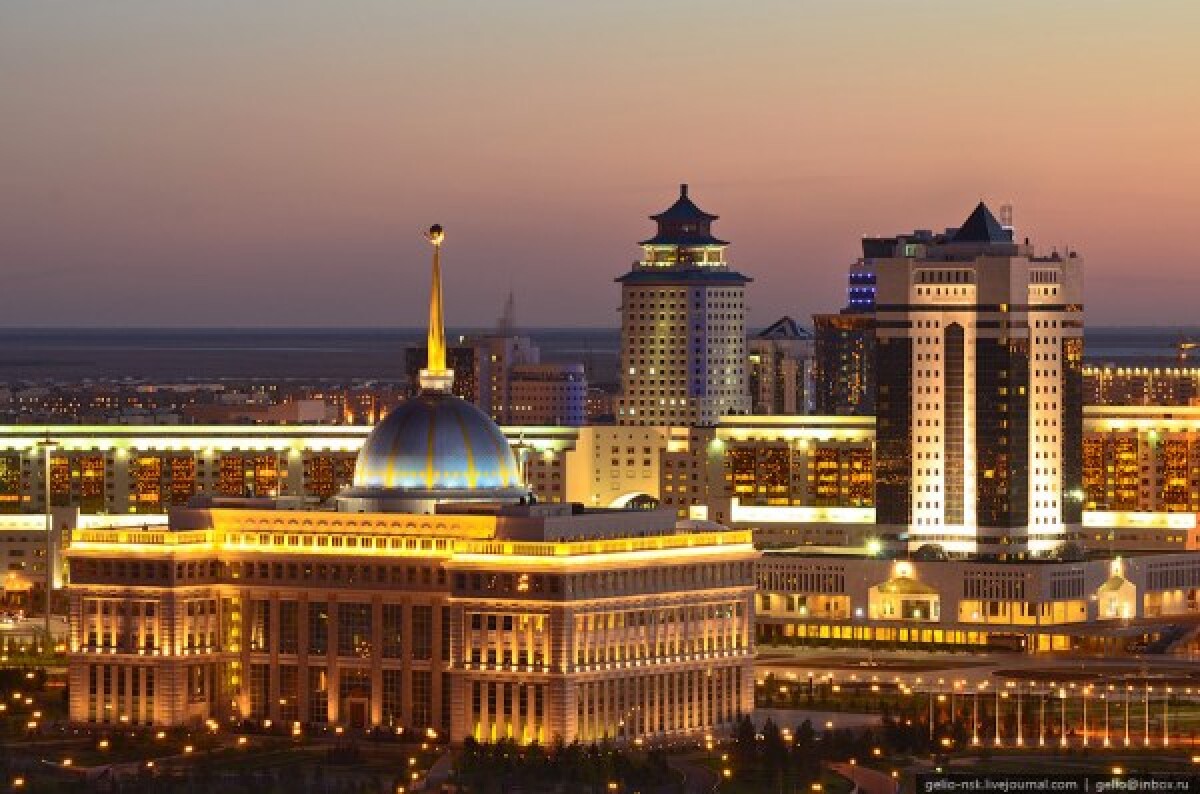 Astana is the capital of Kazakhstan and symbol of national unity

Astana is the capital of the Republic of Kazakhstan, the symbol of national unity, the quintessence of strategic plans and aspirations of an independent state, the most important national project to create an ultra-modern metropolis of the 20th century. Strategic thinking is the President of the Republic of Kazakhstan Nursultan Nazarbayev has identified a promising line of development of the country in the long term, moving the capital was the beginning of a new era in the history of global independent state.

July 6, 1994 the President of Kazakhstan spoke at the plenary session of the Supreme Council of the Republic of Kazakhstan with the report «On the transfer of the capital of Kazakhstan». On the same day, the Supreme Council adopted a historic decision to move the capital from Almaty to Akmola. In proclamation to the people of Kazakhstan on October 10, 1997, the President emphasized: «…on the eve of the 21st century declare about our choice to choose the new capital under the ancient holy sky f Saryarka. Starting from today and for many centuries, at the center of big country, decisions crucial to the people will be made. Hence Kazakhstan will determine its historical destiny in anticipation of the third millennium».

On May 6, 1998, according to the Decree of the President, the capital of Kazakhstan was renamed from Akmola to Astana. Renaming was made at the request of the local executive and representative bodies with the wishes of the public and the city on the advice of the State onomastic commission under the Government of Kazakhstan.

Renaming was made at the request of the local executive and representative bodies with the wishes of the public and the city on the advice of the State onomastic commission under the Government of Kazakhstan.

On June 10, 1998 there was a presentation of the new capital of the sovereign Kazakhstan. Symbolically, a year of the international presentation of Astana became the start of the big Kazakh way — the beginning of the development strategy until 2030.
Astana, the origin of which in a brilliant long history of nomadic civilization of the Great Steppe, is gradually turns into the biggest metropolis of the Central Asian region. «Qualitative and quantitative growth of the capital directly interfaced with the architectural appearance of Astana and harmoniously blended oriental tradition and artistic ideas of leading Western architects. General plan of the city was developed by the President’s idea about giving the city European appearance by outstanding Japanese architect Kise Kurokawa». «Unique structures of Astan can decorate any metropolis of the world and each of the new facilities of the capital is deeply symbolic, expressive and dynamic.

Modern city located on the banks of Esil River surprises with its meteoric rise, fantastic designs, the shining lights of prospectuses. In 1999, Astana already has achieved worldwide recognition. The new capital of independent Kazakhstan was awarded with the UNESCO’s award «World City». This award was given to the planet’s new cities, which in short time could achieve impressive achievements in socio-economic, political and cultural development, as well as realized the goal of strengthening of interethnic and interreligious cooperation. On July 16, 1999, in La Paz the capital of Bolivia the General of UNESCO, Federico Mayor handed to Astana a medal and certificate of the winter of the international competition «Cities for Peace». Since that time, Astana has the title of «World City».

Astana’s economy develops dynamically. Tactic and strategy of capital’s development are defined in the program «Prosperity of Astana — Prosperity of Kazakhstan» (2001), «Strategic Plan for Sustainable Development of Astana 2030» (2006). The economy of the city use such effective mechanisms like special economic zones (SEZs), industrial parks, high technology, developing new for Kazakhstan industries, producing locomotives, cars, helicopters and models of solar batteries. Astana is an innovative heart of Kazakhstan. The capital is the powerhouse Republican innovation process, determining motion vector for other regions. The Concept of the project SmartAstana (Smart City), which combine a variety of factors of urban development in a single system, has been developed and implemented.

At the present stage Astana is the focus of all of the processes occurred in the modern Kazakhstan. A unique image of the city was formed. It can implement strategic challenges that faced our state in the 21st century. In May 2007, by the President’s proposal in the text of the Constitution was included an article on the state capital — Astana.

Transfer of the capital created maximum conditions for self and career development of energetic and ambitious young people, creating a new generation of leaders and active builders of new capital. They are create a new image of the new capital, the specifics of metropolitan business culture and that synthesis of Western and Eastern, which gives perception of Astana. According to the latest population of Astana, on May 1, 2013 there are 788, 266 people (1989- 281.3 thousand people). The population of capital is one of the youngest in the country. The average age of the capital is 32 years.
Transfer of the capital, with multinational population in their region strengthened the multiethnic state, preservation and enhancement of friendship and understanding between ethnic groups in the country. A special ethno-cultural appearance of the capital that includes key concept of spiritual and intellectual discourse becomes tolerant and multi-ethnic community (more than one hundred ethnic groups) stands united urban enclave with its special metropolitan spirit.
Astana originally was not only planned as an administrative center, but also as a scientific and cultural center of Kazakhstan. Astana is a growing agglomeration of highly educated people. 265 educational organizations are in Astana at the beginning of 2013.Leader of the national higher education is the Nazarbayev University, around of which was created intellectual innovation cluster. Its formation is envisaged in the draft «road map» and will include the creation of an industrial high-tech site for the high-tech projects and units known innovation and manufacturing companies, industrial park and business incubator, Center for Engineering, Technology Commercialization Center and venture fund.

Astana is the largest cultural center of the Eurasian region. It considered as the cultural capital of the country and the national communications center, manage cultural exchange. Metropolitan universities, museums, theaters, libraries, exhibitions, art workshops, creative unions, concert halls make capital guardian of the best traditions and cultural achievements. Significant cultural event was the official opening of the capital of classical opera and ballet «Astana Opera», a priceless gift for the 15th anniversary of Astana. Under the arches of the theater President speaks with the Strategy «Kazakhstan-2050», in which the culture is indicated as an integral part of the genetic code of the nation.

Astana is the epicenter of the most important global political events. With the transfer of the capital to Astana, Kazakhstan received a new content and implementation of Kazakhstan’s foreign policy, built on the principles of the new international responsibility Kazakhstan, multidirectional and participation in the fight against global threats. Implementation of the foreign policy of an independent state defined the status of Astana as diplomatic capital, brand «official Astana» becomes an indicator of responsibility, efficiency, gained worldwide fame. Capital of Kazakhstan in the international community is associated with the political events of international significance. In Astana, at the highest level, meetings of Heads of State and Government of the international organizations such as the Shanghai Cooperation Organization (SCO), the Commonwealth of Independent States (CIS), the Eurasian Economic Community (EEC), the Organization of the Collective Security Treaty Organization (CSTO).

Worldwide recognition of Astana as real geopolitical center of the 21st century was December 1, 2010 at the OSCE Summit. Kazakhstan as chairman of OSCE became the initiator and conductor Eurasian security policy and cooperation. Astana declaration adopted at OSCE Summit was a unique document that opens the way for further coordinated work in all areas of global security.

At the beginning of 21st century, Astana is becoming a genuine planetary dialogue platform to promote and call for tolerance, peace and integration. Unique experience of our state to strengthen interfaith harmony and unity of the people at the international level is the Congress of Leaders of World and Traditional Religions (2003, 2006, 2009 and 2012).

Recognition of the potential of Astana will be hosting of the World exhibition EXPO-2017. President of Kazakhstan noted in the Strategy «Kazakhstan — 2050»: «We built the new capital of the country — Astana. It is a modern city that has become our symbol and pride. We were able to use the potential of the capital to show the world the possibilities of our country. That is why the international community has chosen venue Kazakhstan World Exhibition „EXPO-2017“. This would not have happened if there was no Astana. Not all can be awarded with such an honor. It is enough to say that our country was the first in the CIS, who chaired the OSCE summit held this organization and the host of the EXPO-2017 — the World Event».

Capital of Kazakhstan — Astana currently perceived not just as an administrative center of the country, but as a true symbol of the transformation taking place in Kazakhstan, creative energy, a symbol of people’s faith in their own strength, hope and confidence in their future and the future of their offspring. Chronicle of new capital continues. The chronicle of national history in the new century is created here.

Institute of History of Ethnology named after Sh. Valikhanov MES of RK, 2013