N.A.Nazarbayev's works on history of Kazakhstan 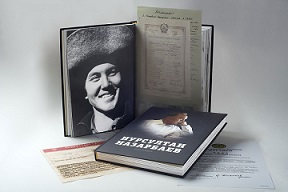 Scientific works of the President of RK, Nursultan Nazarbayev take an exclusive place in the history of the Kazakh culture and statehood. Books of the President help to understand the past and to construct the future. Among scientists, graduate students, competitors books "In a History Stream", "Kazakhstan-2030: prosperity, safety and improvement of welfare of all Kazakhstan citizens", "Euroasian Union: ideas, practice, prospects", "World epicenter", "Strategy of formation and development of Kazakhstan as sovereign state", "Ideological consolidation of society - as a condition of progress of Kazakhstan". Students of higher education institutions often address to books "On a Threshold of HH_ of an Eyelid", "Critical Decade", "Kazakhstan Way", "Five Years of Independence" and others, use special popularity

Ideological consolidation of society - as a condition of progress of Kazakhstan.

"Independence of Kazakhstan: lessons of history and present"

The report at the solemn meeting devoted to the 5 anniversary of independence of the Republic of Kazakhstan.

1997 was declared by the President of the Republic of Kazakhstan as a year of an international consent and memory of victims of political repressions.

"Historical memory, a national consent and democratic reforms - a civil choice of the people of Kazakhstan"

The report at the IV session of Assembly of the people of Kazakhstan, Akmola, on June 6, 1997.

"From the totalitarian past – to stable and democratic Kazakhstan". Performance at solemn meeting on the occasion of the Independence Day and the announcement of the city of Akmola the capital of the Republic of Kazakhstan

"Moral and political choice of the intellectuals". Performance on enlarged meeting of the state commission on carrying out Year of unity and national history.

1999 was declared by the decree of the President of the Republic of Kazakhstan as a Year of unity and continuity of generations. In the annual Message to the people of Kazakhstan the President noted: "Who doesn't remember the past, to that it comes back as its future".

Independent Kazakhstan – live and be well! Performance at solemn meeting on the occasion of the Independence Day of the Republic of Kazakhstan

Year of support of culture declared by the decree of the President of the Republic of Kazakhstan N.A.Nazarbayev was a new important stage in spiritual life of the country. At governmental level it is planned and it is realized a complex of the actions aimed to the development of folk and professional art, cultural support of the village and preservation of historical heritage.

"In a history stream"

The history of the Kazakh people is unique both on evolutionary development, and according to the contents. It is saturated with the greatest tests for quality check, firmness, courage and the dignity of Kazakhs. More than once we appeared on the verge of a total disappearance, but always found forces for revival. The history remembers how Kazakhs, like a Phoenix bird, revived again from a non-existence and began the movement in a great caravan of a world civilization.

Spiritual and cultural development of the people – a basis of strengthening of the state independence of Kazakhstan // Kazakhstanskaya pravda. – 2000 . – December 16.

In performance at the VII session of Assembly of the people of Kazakhstan the President of the Republic of Kazakhstan N.A.Nazarbayev noted the necesserity of a certain choice of cultural policy. "The Kazakh culture is first of all, the experience of the traditions which have allowed the people … to remain as the independent cultural phenomenon of the modern world acquired by eyelids. The Kazakh culture objectively has to become that a kernel round which it will be built, but not to be dissolved a cultural community of all Kazakh people".

Makhambet - unfading spirit of courage and freedom. Performance at the scientific and practical conference devoted to the 200 anniversary Makhambet Utemisov

Kazakhstan way. - Karaganda, 2006. The book of the Head of state tells about the most difficult and high points in the contemporary history of Kazakhstan. Each of nine heads opens sign steps on a way of formation of the young independent state. It is work on Strategy of development of Kazakhstan till 2030, process of adoption of the existing Constitution of the country, the beginning of development of oil and gas resources, input of national currency and creation of a successful banking system. Processes of privatization and carrying out land reform are covered in certain heads, is told about capital transfer to Astana and the first flight of the Kazakhstan citizen in space.

Books of the president of Kazakhstan Nursultan Nazarbayev is one of rod posts of Kazakhstan, one of republic foundations, and that is their principal value. Over time, this value of presidential works will increase only.

Use of materials for publication, commercial use, or distribution requires written or oral permission from the Board of Editors or the author. Hyperlink to Qazaqstan tarihy portal is necessary. All rights reserved by the Law RK “On author’s rights and related rights”. To request authorization email to mail@e-history.kz or call to (7172) 79 82 06 (ext.111)
Қазақша Русский English
MOST READ
Month Year
Recorded history of Kazakhstan. Part 2
Heroic mothers of the great steppe
How had the World War II been started?
Philosophy of the Emblem
14 monuments at Tekturmas
The rural akims: the country's hope is in the elections
Kazakh historical drama Tomiris premiered in Istanbul
Stolypin about the worries and hopes of immigrants to the Kazakh steppes
ALASH IDEA IS THE PROTECTION OF KAZAKH STATEHOOD
A tireless explorer of the Kazakh land
SWITCHING TO THE LATIN ALPHABET – UNITE ALL KAZAKH PEOPLE
Kunaev Dinmukhamed Akhmedovich
People who eat horses will kill you
Materials on theme
Science and scientific studying of Kazakhstan
GABIT MAKHMUTOVICH MUSREPOV
ALIKHAN BUKEIKHANOV
History of the Semipalatinsk Test Site (infographic)