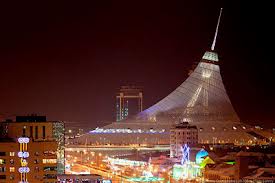 From the first days of its high status as the capital Astana is at the epicenter of all socio-political,  socio-economic and spiritual and cultural events.

Our generation has a unique opportunity to be witnessing the birth of the new capital of the young independent state. Before our eyes, a provincial town has become one of the most modern and fastest growing capitals of the world.

It has been almost 20 years since that memorable event, when by the initiative of President Nursultan Nazarbayev at the meeting of the Supreme Soviet of the 13th convocation, was decided to move the capital from Almaty in Kazakhstan then Tzelinograd. While many have taken the initiative of the Head of State as being too ambitious goal, an impossible task for a young, only fledgling country. Now we have seen once again in a wise and far-sighted policy of the president of our country.

World history remembers not one case of transfer of the capital from one city to another. For each State was a special milestone in his chronicle, which defines a new stage of development of the country. Often, this step was a legitimate necessity imposed by time, the most correct answer to the new challenges. After all, the definition of new capital is a powerful impetus to socio-economic and political development.

Deep and hidden meaning lies in the fact that in the most dramatic moments in history when acute problems of our national integrity, from the era and Toktamys Edyge in ancient times to Tauke Abylaja and in the recent past, the main interest is transferred to the Northern Territory.

In the early 20th century, the first Kazakh liberals - the leaders of the party "Alash" also made ​​efforts to ensure that the political center was moved to the region, initially was of great strategic importance.

Truly, yesterday strategic decision of the President embodied today in the young, but strong and forward-looking capital with unique architecture. The city, which is the hallmark of our country - the center of the boldest projects implementation. To develop a master plan of Astana was specially invited by a famous Japanese architect Kisho Kurokawa - author of such ambitious projects as the Van Gogh Museum in Amsterdam and the international airport in Kuala Lumpur. Kazakhstan's capital was built in record time.

From the first days of its high status as the capital Astana is at the epicenter of all socio-political, socio-economic and spiritual and cultural events.

It is the place where reforms being born, important decisions have been adopted on further innovative development of the country. Astana annually performs an arena for the discussion of current issues and religious leaders of the world takes traditional religions from all points of the planet. In 1999, the new capital of Kazakhstan was awarded the UNESCO "City of Peace", in 2012 she became the cultural capital of CIS and Turkic world. Proud that in 2017 Astana will become a platform for the international exhibition EXPO-2017. This event on a global scale, comparable in importance with the World Economic Forum, and a tourist attraction - with the most ambitious sporting competitions in the world. EXPO- 2017stanet first exhibition held in the CIS countries. It will take about 100 countries around the world, and our capital will be able to visit more than 5 million people.

All this represents the authority of the young capital, the image of our country on the world stage. Astana - the pride of the whole nation, the triumph of independent Kazakhstan. Her new heights are still ahead. Our heroic history and traditions of life-affirming creative affairs should find a worthy continuation of the new capital - Astana.