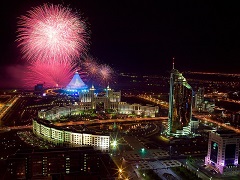 HISTORICAL ROLE OF THE PRESIDENT OF THE REPUBLIC OF KAZAKHSTAN N.NAZARBAYEV IN TRANSFERRING THE CAPITAL OF INDEPENDENT STATE.
In the young history of independent Kazakhstan capital Astana and the President of the Republic of Kazakhstan Nursultan Nazarbayev inextricably linked. This is evident both for Kazakhstan and for the political and business circles, the general public, scientific and cultural world and abroad. Today, we can confidently say, no one can deny the fact of creation of the new capital of the country by the President N.Nazarbayev. His role in the development of the city as the capital of the young state overestimated.

Successes of Kazakhstan in the socio-economic development and in the international arena, its recognition by the international community as a state leader in Central Asia are largely due to the dynamic development of the nation’s capital. Summing up an ambitious project to establish the capital, the President, in his book «Kazakhstan’s way» writes: «The transfer of the capital of Kazakhstan Tselinograd, which is now the Astana became a watershed of a new era of statehood of Kazakhstan. Astana after became the capital, opened the third epoch in its history».

Thinking about cities, Nazarbayev defines the city as a specific living, concrete historical education: «… the city, as people are complex» living «organisms." Urban development, their lives are determined by the specific historical situation. Cities, like people, have their own destiny, the biography of a special nature and omens. Capital as the main city and administrative center, belongs to the entire state and every citizen should therefore have a special extraterritorial status.

In the context of conceptual approaches to the problem of moving the capital, the state capital relocation from one city to another as an extraordinary event in the framework of the concept of one person, as well as moving a person to a new location. But across the state transfer of the capital stands although not quite ordinary and not too extraordinary event because it has a fairly common practice, and always, as a rule, motivated and justified.

Reasons for the transfer of the main city of the country there are a variety of reasons. As in the biography of the man, in the state’s history are turbulent periods when radically changing ideas about the geopolitical role of the state in the existing world. And then especially acute question about the location of the capital, as a necessary and crucial to the further development of a stable state. «The realities of the present and a number of geostrategic factors forced us to take a new approach to the process of forming our own geopolitical space." Important role in the decision to postpone the country’s main city play interests of the people, as evidenced by historical experience.

«Generally speaking, the process of transfer of the capital — this whole saga that deserves special attention and a detailed exposition» — President writes. He compares this process to the process of the search for scientific truth, and the relation to the transfer of the capital with the attitude to scientific discoveries, showing common algorithm of these processes, the logic of action discoverers.

Analyzing the various circumstances and reasons for the delay capitals, the author turns to the world at the same historical experience and shows the diversity of this process. According to the President, the importance role for the country and its people gives the transfer of the capitalin the difficult period of the state sovereignty. It becomes an important factor in the approval of the country’s independence, strengthening its public foundations.

In an interview with the newspaper «Kazakhstan Today» President of the Russian Federation v. Putin emphasized: «For Kazakhstan, Nursultan Nazarbayev — historically unique figure… it is not just the First President of Kazakhstan. He is the creator of the Kazakh, Kazakhstan’s statehood. In this sense, he has a unique historical role. «Certainly, the proposed N. Nazarbayev’s idea and realization of the project to transfer the capital of Kazakhstan played a crucial role in the development of state of the Kazakh people.

Material provided by the Institute of History of State
Use of materials for publication, commercial use, or distribution requires written or oral permission from the Board of Editors or the author. Hyperlink to Qazaqstan tarihy portal is necessary. All rights reserved by the Law RK “On author’s rights and related rights”. To request authorization email to mail@e-history.kz or call to 8 (7172) 57 60 13 (in - 1163)
Қазақша Русский English
MOST READ
Month Year
Recorded history of Kazakhstan. Part 2
Heroic mothers of the great steppe
How had the World War II been started?
Philosophy of the Emblem
14 monuments at Tekturmas
The rural akims: the country's hope is in the elections
Kazakh historical drama Tomiris premiered in Istanbul
Stolypin about the worries and hopes of immigrants to the Kazakh steppes
ALASH IDEA IS THE PROTECTION OF KAZAKH STATEHOOD
A tireless explorer of the Kazakh land
SWITCHING TO THE LATIN ALPHABET – UNITE ALL KAZAKH PEOPLE
Kunaev Dinmukhamed Akhmedovich
People who eat horses will kill you
Materials on theme
History of Astana
The initiator of developing the new capital city
Astana - the capital of the Republic of Kazakhstan
The steppe pearl