Home History of Kazakhstan Dynamics of development of the political system

Dynamics of development of the political system 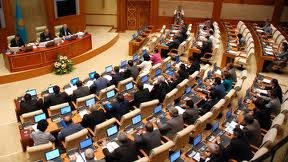 From the beginning, the process of formation of the party system of the Republic of Kazakhstan there is a lot of political parties and movements. They arise and fall, which is quite natural for the stage of formation of a democratic party system. I should add, of course, that all of these parties, movements and simple formation differed among themselves on the number of members and the scope of its activities. Between them there was even some growth in the struggle for the expansion of its social base. Already the 1999 elections were held with the active participation of national political parties and international observers.

However, after two years from the time of the 1999 elections people of North Kazakhstan, for example, found it difficult to name the most important at the time the party. [2] Not all were able to note the three most important, in their view, the party. Then just before the Kazakh parties faced the problem of image formation, the lack of which is found especially during elections. Behavior of the electorate did not focus on a specific game. Although the party and declared that they represent the interests of a particular social group, they tended to be small numbers, unknown to the population and caused him great interest. This situation is currently incomplete in society reflects the stratification process, differentiation of social strata and their awareness of lots of group interests. Therefore, the party does not have a clear policy to protect vested interests of an uncertain orientation and similar programs.

According to a survey conducted by the author in 2001, people of the North Kazakhstan region during that period had a difficulties to assess the state of political parties. 42% of respondents did not see any differences in the programs and activities of political parties and to only 15% of them believed that the defined core parties that are able to play a role in the election campaign. Political orientation of the region’s population was of a vague. There was no sharp division into right and left, reformers and communists. Apparently, the citizens did not have confidence in the fact that this or that political party can have a fundamental impact on the reforms, and they themselves are not in a hurry to become a member of a political party, although individual membership in a political party in a stable pluralistic democracies are traditionally regarded as way through which citizens indirectly affect government decision-making.
In subsequent years, political parties have become the main political actors, the party system is still limited. In this situation, the initiative group of MPs from the faction of «Otan» party has put forward a proposal for a new law on political parties. The bill has been widely discussed in the press and was accepted. Some have suggested that the political parties are likely to be merged into blocks and in the near future in Kazakhstan will develop two-party system. However, Center Party united in a single party «Nur Otan», the opposition parties are not in a hurry to do the same. Back in 2001, according to respondents, the most authoritative left the Republican Party «Otan». She is known to the population due to its widely pursued campaigning election program on the eve of the 1999 parliamentary elections, the fact that most members of the party are employees of public institutions and in financial terms, it is much stronger than the other parties. The rest of the party remained mostly unknown to the population and caused him great interest. Parties had no clear policy to protect the interests of the population, had vague orientation and similar programs. At the initiative of the President of the Parliament have been increased space for representation of political parties. Party, without exception, have the right to conduct propaganda and agitation among the people to participate in elections. Republic moved from mass electoral system to proportional.

However, the elections to the Majilis of the Parliament of 2007 showed the weakness of most of the existing political parties in the country, with the exception of «Nur Otan».

Analyzing the information obtained during the investigation of the electoral process in rural areas to improve the MSE public confidence in the election, on the initiative of the NGO «Women’s Support Centre», it may be noted the active position of representatives of that party. According to the reports of observers at polling stations 108 people attended, representatives of political parties. They were not on the 13 areas of study 66, which is 19.7%. We conclude that these 13 sites during the election campaign was not carried out propaganda work of political parties. Consequently, the population of these districts had no idea of the work of any parties, whether they are the opposition, the right or left. All observers noted representatives from political parties are members of the party «Nur Otan» and only two of them — the party «Aul». On the other parties do not have even a cursory mention. If the opposition parties do not appoint their representatives to the regional centers, it is a serious bug in party work. Little attention on the part of the parties to the needs of people and entails a backlash — citizens are far from specific problems of these parties. They will not vote for their representatives.

According to research the political opposition was not represented. Thus, the opposition parties and the party who sought to enter the number of parliamentary, did not actively participate in the campaign, at least in the rural districts. The data show that the most politically active was «Nur Otan».

First, most observers were supporters and members of the party;
Secondly, at the election stations were necessarily representatives of this party;
Third, the majority of candidates for deputies were also members of «Nur Otan».
«Nur Otan» party in the election campaign has proved to be the most active political force. It managed to show his organization, the ability to work with the electorate, the ability to assess the political situation.

Based on information from the observers 170 deputies were elected. Among them 152 people (89.4%) — members of «Nur Otan». Party affiliation is not indicated four deputies, 14 people (8.2%) are non-partisan.

The victory of «Nur Otan» is largely predetermined by its political platform. Pre-election platforms have a clear objective — to attract the sympathy of the greatest possible number of people, and are aimed at the electorate. This is done by distributing written or oral messages, which laid the ideas that form the positions of parties in the existing political system. Thus, from a political platform can understand the attitude of the parties to the current socio-economic situation in the country, their assessment of the President’s choice of development path, self-esteem of the party.

People’s Democratic Party «Nur Otan» — «party of power» [1]. Her campaign platform is a substantial document that reflects all the key issues of political, social and economic spheres. The program includes all the positive things — family, people, recovery, community Kazakhs — associated with the activities and program installations party. Party is actively promoting the ideas, highlights particular that has been done, and how and by what will be achieved or that progress in the field of economics, politics, social sphere. Propaganda and ideological component party platform is well developed. This distinguishes it from the other political parties.
The defeat of the six parties in the elections indicates weak institutional, ideological and material basis of these parties. But this does not exclude them from the political struggle and the further democratization process.

Leader of the Party of Patriots G.Kasymov appointed deputy senate that may favorably affect the position of the party, to give new impetus to its development. Now it formally became a parliamentary party. Centrist party KSDP «Aul» was able to spend more of its representatives in Maslikhats — local representative bodies. This circumstance gives reason to believe that the party has a potential for growth and further development.

Communist People’s Party of Kazakhstan (CPP) — the representatives of the left part, also holds a number of seats in local representative bodies in the country. CPP to boycott elections, which led to a serious weakening of its position in the political process. Representatives Democratic Party of Kazakhstan (DPK) «Ak Zhol» made in court and public order with contesting the election results together with the leaders of Nationwide Social Democratic Party (NSDP) and CPP. But even the leaders of these parties recognize the legitimacy of the elections and the victory of «Nur Otan» [3].

Obviously, the further development of political party system involves increasing organizational and substantive level political parties. This process cannot be operated without their relevant experience, primarily in the area of parliamentary activity, which is the link between the will of the electorate and public policy.
Party system of Kazakhstan continues to emerge. Political parties have a serious work. On their activity, organization and ability to work with the electorate will depend on the further development of democratic processes in Kazakhstan.