Special economic zones in Kazakhstan during the independence 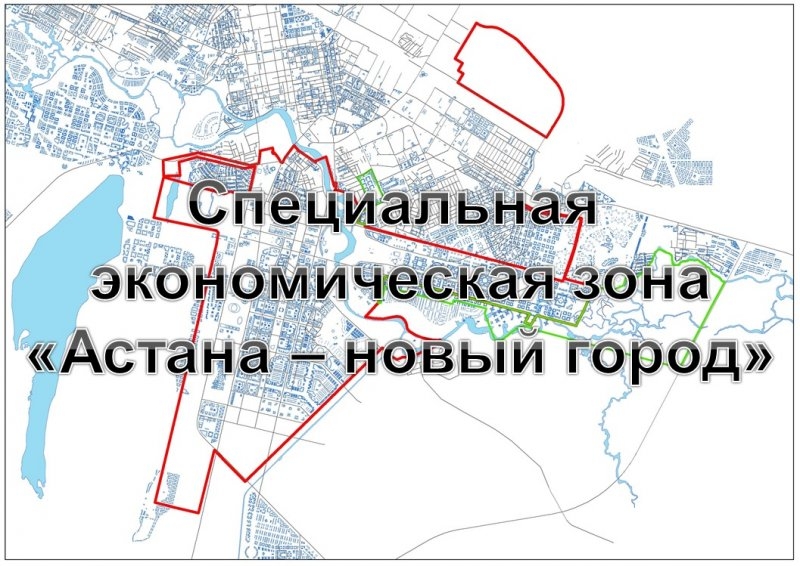 According to experts, Special Economic Zones (SEZs) are part of the national economic space, which uses a special system of benefits and incentives, which is not used in other parts of the country. Thus, the SEZ are in varying degrees apart geographic area [1]. However, there are other definitions of the term. For example, in the anthology «Modern History of Kazakhstan», stated that «Special Economic Zone — This is a restricted area with a special legal status in relation to the rest of the territory and favorable economic conditions for domestic and foreign businessmen» [2, p. 536].

In the scientific literature, along with the term «special economic zone» also uses the term «free economic zone», which is considered to be equivalent, which in our opinion is not entirely true. Since the term «free economic zone» means any land, within which there are any preferential terms of economic and entrepreneurial activities, customs, currency, tax, and visa [3, p. 502]. From the above we can conclude that these two terms still have slight differences from each other and their values must be distinguished.

In Kazakhstan, however the concept of «special economic zone» legislation did not appear immediately. At the beginning of the 1990s, the term «free economic zone», formally enshrined in the law of the Kazakh SSR, was used. In law, the term means the following: «Free Economic Zone in the Kazakh SSR — a specially designated area with well-defined administrative boundaries and a special legal regime created in order to attract foreign capital, advanced foreign technology and management expertise for accelerated socio-economic development of the zone» [4; 5, p.8].

Controls in the SEZ specially appointed management company. Besides it, the members of zone are legal entities engaged in the area of priority activities. The main purpose of these zones is to provide an enabling environment for investors to build in the area of high-tech industries. All participants operate under a special legal regime. The decision on the establishment of the SEZ made by the President of Kazakhstan, on the proposal of the Government in the form of the decree, which further will be complemented with additional decree. Validity of BMS does not usually exceed 25 years [9].

In 1991, the Supreme Soviet of the Kazakh SSR of 18 June was created Zhairem-Atasuysk free economic zone in the then existing Dzhezkazgan region became the first zone of its kind in Kazakhstan [5, p.8].

January 11, 1992 decisions of the Supreme Council of the Republic of Kazakhstan have been established: the East-Kazakhstan free trade zone within the administrative-territorial boundaries of the East Kazakhstan region [7, p. 32]; Alakul Zharkent and free economic zones within the administrative-territorial boundaries Alakul and Panfilov district Taldykorgan area and free economic subzone in Taldy Kurgan on the basis of enterprise «Taldy Kurganvneshtrans» [5, p.8].

June 30, 1992 by the decision of the Supreme Council of the Republic of Kazakhstan Lisakovskaya free economic zone was created [7, p. 57].

In 1996, by the following decrees of the President of the Republic of Kazakhstan have been established:

— August 23 — Lisakovsk special economic zone within the city Lisakovsk Kustanai region, with a life expectancy of up to 2010 which replaced the pre-existing regime of free economic zone [7, p. 199; 10, p. 46];

— October 9 — Akmola special economic zone. Subsequently, a decree was amended in accordance with which the area was renamed «special economic zone of the city of Astana." The first chairman of the SEZ was appointed A. Bulekpaev. Area has become a powerful impetus to the capital intensive infrastructure formation and development of the city. For example, through the action of the SEZ in Astana were built neighborhood «Samal», 9th block, a sports complex «Kazakhstan», many government buildings [7, p. 202; 11, p. 95 — 108];

— November 14- Zhairem-Atasuyskaya special economic zone this replaced the pre-existing regime of free economic zone with a life expectancy of up to 2007. Zone was located in the Zhezkazgan area and included the city of Caracal, towns and Zhairem Shalginsky and reserve lands Zhezkazgan area. As a result of the SEZ Zhairemskiy Mining Plant went on to become the largest company of Kazakhstan for the production of iron and manganese concentrates. Also in the area was started concentrating factory on processing of manganese ore and carried out construction of its own steel plant producing zinc and lead [7, p. 206; 12, p. 155].

However, according to experts the first results of most educated in the 1990s SEZ jeopardize established regional economic ties and weakened the position of domestic producers and contributed to the growth of unfair competition. In connection with this, it was decided to close the Atyrau, East Kazakhstan, Karaganda and Mangistau free economic zones. The main reason for the closure zones researchers believe that decisions about their education were adopted without a thorough analysis of the economic capacity of the regions, besides out properly developed legal and institutional mechanisms for the use of zones and areas of administration was not independent in solving financial, fiscal and organizational issues [13].

In the modern period in Kazakhstan there are 10 special economic zones «Burabai», «Astana — new city», «Seaport Aktau», «National Industrial Petrochemical Technology Park», «South», «Park of innovative technologies», «Pavlodar», «Sary-Arka», «The chemical park"Taraz» «," Khorgos — East gate». All SEZ researchers have identified the following general advantages attractive to investors:
— The imposition of VAT at the zero rate the sale of goods consumed by the zone members to carry out activities that meet the objectives of the SEZ;
— Provision of land and construction of infrastructure at the expense of budget funds;
— Exemption from payment for the use of land for SEZ participants for up to 10 years and from the property tax;
-Reduction Corporate income tax on 100% of income from activities consistent with the objectives of SEZ;
-Absence of Customs duties and contributing to a reduction of administrative barriers [15].

Let’s consider some examples of the favorable effect of the SEZ in Kazakhstan.
In the special economic zone «Astana — new city» were implemented following successful projects:
-Companies ALSTOM (France), carrying out production of electric locomotives. The advantages of electric current company here, is that they allow you to reduce power consumption for traction, reduce their negative impact on the railway track, greatly reduce the cost of maintenance and repair [14, p.37; 15].

— Companies General Electric (USA) which produces diesel locomotives. In July 2009, the grand opening of a new locomotive plant was held. In December 2009, they released their first locomotive series «Evolution». Start of Kazakhstan’s first high-tech assembly plant locomotives testified about the real possibilities of our country and its attractiveness to investors. Produced a new generation of locomotives are consistent with Euro-3, resulting in the consumption of fuel and oil was 17 per cent lower than the old, and the percentage of harmful emissions into the atmosphere has dropped to 40 were also created favorable conditions for the operation of the locomotive crew. For example, in the cab were provided insulation and climate control [14, p.56; 15; 16, p. 228].

— LLP «Astana Solar» — a subsidiary of the «National Atomic Company» Kazatomprom «- the world leader in uranium production, the project» Creation of production of photovoltaic modules based on silicon Kazakh «KazPV». Activity — an example of the concept of Kazakhstan’s transition to a «green economy» and the «Energy Savings — 2020». Built by the factory is equipped with European automated equipment of the new generation, allowing the finished photovoltaic modules with a total capacity of 50 MW per year with an extension in the run up to 100 MW [15, 17].

SEZ «Seaport Aktau» since 2006 conducted a gradual expansion of the port of Aktau, which increased its capacity by 2 times — from 11 to 23 million tons per year. Subsequently, in the city of Aktau company «Arcelor Mittal» factory was built on production of oil pipeline [12, p.165, 18, p. 75].

SEZ «Information Technology Park «Alatau» or «Alatau IT City» was the first object of High-Tech Industry in Central Asia. In addition to the well-known benefits for all zones in the SEZ, the following additional benefits: reduction of social tax software companies up to 5 years, an increase in the marginal rate of depreciation from 15% to 40%, applied to software. This is the first major project to create industrial park at the national level in Kazakhstan. Existing businesses are engaged in the production of LCD televisions, monitors, personal computers, laptops, servers, software development, customization, semiconductor and other Electronic devices [15].

In addition to the economic function, in the history of independent Kazakhstan special economic zones have played the role of a testing ground for the realization of architectural ideas and urban plans. The President of Kazakhstan N. Nazarbayev mentioned about it his book «In the heart of Eurasia».
For example, in Astana due to intense activity of SEZ were built: the Islamic cultural center «NurAstana» apartment complexes «Otrar» and «Almaty» monument «Astana-Baiterek» diplomatic town, building a national company «KazMunaiGas», the hall of joint sessions of the Chambers Kazakhstan’s parliament, the new residence of the President of the Republic of Kazakhstan and many others. Also a highway «Center of Left Bank — Abylaikhan Avenue» was paved. The territory of the city has increased by 2.5 times. In the capital there was a big economic potential in the following industries: hospitality, service industry and tourism [11, p. 153 — 161; 18, p. 43].

In addition, the mechanism of areas’ activity has become one of the factors for the creation of a favorable investment climate. State in a relatively short time managed to create a stable flow of foreign investment. During 1991 — 2010 period of time about $ 140 billion foreign investment had been raised. The main investor countries were the Netherlands, USA, France, China, Japan and United Kingdom. By 2012, the amount of money involved in foreign investment amounted more than $ 160 billion [19, p. 175 — 176].

From the above it can be concluded that, for the proper functioning of SEZ in our country’s independence was established quite a strong legal framework. Despite early setbacks, seemingly jeopardized the existence of the process and the subsequent creation of free and later special economic zones, the government terminated the process of establishing such zones in Kazakhstan. On the contrary, learn from the mistakes of the 1990s, the government made the relevant findings, subsequently allowed to achieve positive results. Was fortified by the legislative mechanism of action of SEZ brought reliable investors, and established the process of granting privileges, performing activities are entrepreneurs. Subsequently, the process of increasing the quantitative and qualitative aspects of the process of creation of such zones has allowed to develop infrastructure in the regions, to open new branch in production, establish a process for the release of new products, create new jobs and contributed to the development of the construction boom, which benefited the rise of industry and the development of the economy of Kazakhstan in general.

5. M. Sarsembayev, the legal status of economic zones in Kazakhstan and the world: Astana, Daneker, 2002,100 p.

Junior Researcher, Master of Arts at
Institute of History of State CS of MES of Kazakhstan

Use of materials for publication, commercial use, or distribution requires written or oral permission from the Board of Editors or the author. Hyperlink to Qazaqstan tarihy portal is necessary. All rights reserved by the Law RK “On author’s rights and related rights”. To request authorization email to mail@e-history.kz or call to 8 (7172) 57 60 13 (in - 1163)
Қазақша Русский English
MOST READ
Month Year
Burial mounds of the southwestern part of the Semirechye region
Union of the Archives and Library
The referendum on the Constitution is a significant stage of democratization
Heroic mothers of the great steppe
Philosophy of the Emblem
14 monuments at Tekturmas
The rural akims: the country's hope is in the elections
Kazakh historical drama Tomiris premiered in Istanbul
Stolypin about the worries and hopes of immigrants to the Kazakh steppes
ALASH IDEA IS THE PROTECTION OF KAZAKH STATEHOOD
A tireless explorer of the Kazakh land
SWITCHING TO THE LATIN ALPHABET – UNITE ALL KAZAKH PEOPLE
Kunaev Dinmukhamed Akhmedovich
People who eat horses will kill you
Kazakhstan's participation in the Winter Olympics has a long history
Materials on theme
The new type of public administration
The new socioeconomic priorities, initiated by the “Kazakhstan -2050”Strategy” Program Koshanov A.K.,
The new concept of regional development in Independent Kazakhstan: theory and practice
Potential of industrial and innovative modernization of Kazakhstan