Kazakhstan as a semipresidential republic 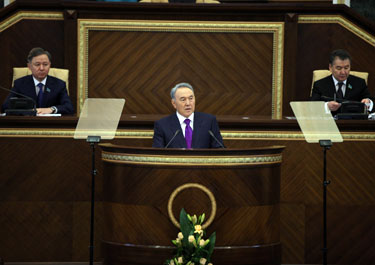 Adoption of new Kazakhstan’s Constitution on 28 January 1993 was another step in the establishment of the presidential republic.

Adoption of new Kazakhstan’s Constitution on 28 January 1993 was another step in the establishment of the presidential republic. According to Article 85 of the Constitution, “The Cabinet of Ministers is accountable to the President of the Republic”.

The Constitution of the Republic of Kazakhstan of 1993 established a semi-presidential system of government, i.e.:

1)  According to the Constitution of 1993, the President held the status of the head of state and of the unified executive branch power. At the same time, the President held the right to issue decrees and resolutions, along with the deputies of the Supreme Soviet, the Cabinet of Ministers, the Supreme Court and the Su­preme Arbitration Court. “The president’s right to veto the law could be over­ridden by a vote of two thirds of the Supreme Soviet deputies.”

2)  Not only could the president, with consent of the legislative authority, ap­point the head of the government, but also his deputies, the heads of the key ministries and agencies.

The principle of the division of power into legislative, judicial and executive was first implemented in the Constitution of 1993. However, the Constitution did not develop a proper system of ‘’checks and balances”. There were no mechanisms of resolving conflicts between the legislative and executive branches of power. It was not laid out clearly that in case when such a conflict remains unresolved, either the resignation of the government or dissolution of the Supreme Soviet is neces­sary. Also, there was no procedure for impeachment or suspension of the head of state in certain circumstances.

Source: NURSULTAN NAZARBAYEV: THE FOUNDER OF THE INDEPENDENT STATE (The Chronicles of a Leader) published in Almaty, 2010,  p. 92