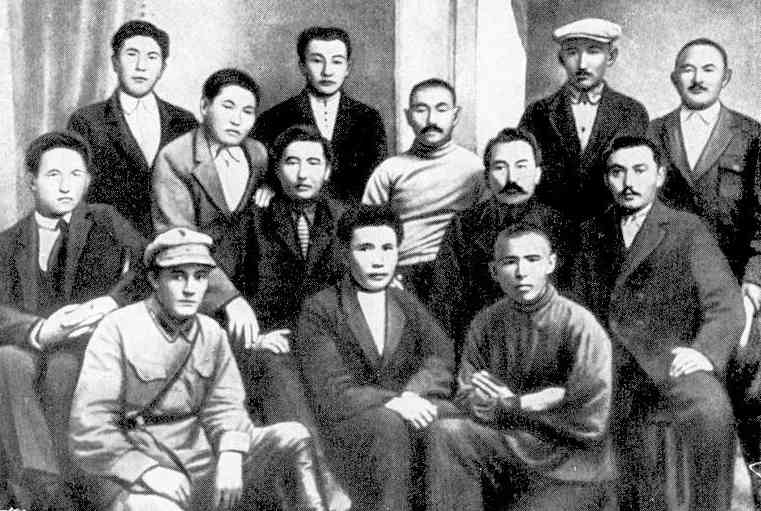 Creativity of the art intellectuals accurately reflected class and ideological and political stratification of the Kazakh society, approved a priority of the class principles over universal.

The art culture of Kazakhstan endured more than once take-off and falling for years of the Soviet power. If by the time of a victory of October literature and musical culture of the Kazakh people had rather rich history of development, graphic, theatrical and motion picture art were in embryo or at all were absent. Creativity of the art intellectuals is accurate отражало class and ideological and political stratification of the Kazakh society, approved a priority of the class principles over universal. For a long time communications of Kazakhstan with the countries of the Central Asian region, China stopped.

The revolutionary and poet S. Seyfullin who has taken active part in establishment of the Soviet power in Akmolinshchina was the recognized leader of those who without hesitation met a victory of October. Being the chairman of CHK KACCP he I conducted big scientific and pedagogical activity.

Fidelity to ideas of revolution of S. Seyfullin kept until the end of life.

Contemporaries called still during lifetime poet M. Zhumabayev by the Kazakh Block. His lyric poet differed a subtlety, innovation, deep comprehension of purity and beauty of human soul. Imperevedena on the Kazakh language of work of Goethe, Heine, M.Yu.Lermontov, M of Gorky, etc. But M. Zhumabayev's poetic talent not always received the correct assessment. So, meeting of the Kazakh students trained at Communistic university of the people of the East in Moscow on November 24, 1924 took place. The collection of the chosen verses of M. Zhumabayev with S. Hodge-is newest preface was a subject of discussion. The conclusion of participants of discussion was categorical: "Magzhan in the majority draws the past, looks for old, sings of nationalism, egoism, dissoluteness. . its verses, in essence, have obviously counterrevolutionary focus", his creativity is directed "not on association of workers of Kazakhstan with the proletariat and the country mass of other countries, not on international unity, and, on the contrary, on their dissociation and seduction from a revolutionary way, wandering in darkness... ".

The preference is given in poems and M. Zhumabayev's poems to universal values, humanity, than the principles of party membership and a klassovost. The poet openly expresses the love to the native steppe, her inhabitants, customs and the traditions which have passed test by time, not without suspicions perceives expansion of borders of urbanichesky, city culture, admires unique beauty of east woman and richness of her inner world.

In the second half of the 20th the professional theater and the Kazakh natsionalny painting arises. Singer A.Kashaubayev with big success acted in concert halls of Paris, Frankfurt am Main. On the eve of the Great Patriotic War in Kazakhstan the Kazakh state academic drama theater, Republican Russian drama theater, the Kazakh state opera and ballet theater, the Orchestra of natsionalny tools, the Symphonic orchestra, Republican puppet theater, the Unions of artists, writers of Kazakhstan worked. Over 600 people were trained in six educational institutions on art.

The first book of the epic novel of M. Auezov "Abay" became the large phenomenon in the Kazakh literature of military years. G. Musrepov published the story "The Soldier from Kazakhstan", the Central integrated film studio organized on the basis of evacuated "Mosfilm", "Lenfilm" and the Almaty film studio, created movies "Secretary of a District Committee", "Russian People", "Wait for Me", "Grigory Kotovsky", "George Saakadze", etc. The Kazakh academic opera and ballet theater "Eugene Onegin", the ballet performances "Bakhchsarai Fountain", "Giselle" of Minkus, etc. carried out statement of the opera of Puccini of "Chio-Chio-San", Tchaikovsky. Composers E.Brusi-lovsky, M. Tulebayev, L.Hamidi wrote the National anthem Kazakh to the Soviet Socialist Republic.

During the post-war period the fiction of the republic was enriched with new creations of writers of A.Nurpeisov, T.Akhta-nova, B. Momysh-ula, S. Mukanov, G. Mustafin, poets K.Amanzho-lova, X. Ergaliyeva, Z.Muldagaliyev, X. Bekhozhina, playwrights A.Abishev, A.Tazhibayev, etc. The world recognition was gained by M. Auezov's epic novel "Way of Abay". Academician K. I.Satpayev noted that this not only outstanding work of art, but also huge on value scientific work. "By this book — he emphasized — there won't pass any historian studying the past of the Kazakh people, the scientist-philologist will gather from it a rich material as from area of formation and formation of the Kazakh literary language; the scientist-ethnographer will find here the most interesting details of life and a life, nowadays already consigned to the past; chapters of the novel devoted to the description of hunting with a golden eagle on foxes, wedding and funeral ceremonies of Kazakhs, a situation and court pictures биев, could be, everyone, the finished scientific work in the ethnographic relation; scientists-economists will receive a bright and truthful picture of structure of cattle breeding economy of Kazakhstan of the XIX century, peculiar forms of class fight in it; scientists-lawyers will get here the most valuable data on legal life of the steppe — from Sharia to court биев... ".

The best creations of motion picture art of the republic of steel "Botha-goz", "Its Time Will Come", "My name is Skin", "Kyz-Zhibek", "End of the Ataman", "Trans-Siberian Express", "Sultan Beybars". Successes of the Kazakh cinema are in many respects connected with creativity of actors of N. Zhanturin, I.Nogaybayev, A.Ashimova, A.Boranbayev, Sh. Aymanov, M. Begalina, S. Hodzhikova, A.Karsakpayev, T.Temenova's directors, etc.

Materials on theme
Formation and destinies of the national intellectuals.
Overcoming of mass illiteracy of the population and development of national education.
Establishment of the Bukey Provincial Department of National Education (based on archival materials)
Modern cultural processes.