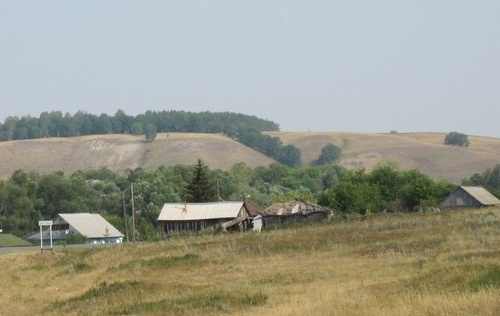 Pressing economic and social problem of the early second half of the twentieth century was the development of the economy and improve the lives of citizens. Unfolding economic and administrative reforms in the late 50’s — early 60-ies of 20th century in the Soviet state, party leaders headed by N. Khrushchev’s government, the regional leadership hoped to use it to solve many pressing issues. Among the latest to time particularly acute, according to the «party leaders» were the dominance of ministries, bureaucracy, lack of clear management and monitoring of economic activities in the field because of the large industrial and construction projects, a large number of uniform supply and marketing organizations, significant unsustainable counter transport, etc. among the negative consequences of such an organization of industry and construction management of the country was a distraction best specialists in Moscow and other large cities, leading to «exsanguination» managerial personnel in the field.

Shortage of trained personnel, especially those with higher and secondary special education, were acutely aware of the periphery. Many leadership positions in the country for 1950 — 1960 years of the occupied managers and specialists with secondary and incomplete secondary education, more practice before the war. Acute shortage of staff were the builders. Thus, in a report to the Executive Committee of the Tyumen (1957) noted that for successful construction is necessary to solve the question»,… to establish a stable frame construction [which — AC], according to conservative estimates, the whole construction program, received on the coming years, will take 80 thousand people»[1].

Analyzing this situation in Tyumen and Kurgan economic councils, while entering into the region Zauralye we see in a mirror, «picture» fits into the overall fabric of the processes occurring in the Soviet state. Leaders of the Kurgan and Tyumen economic councils was completed centrally (separate orders from Moscow government for each chairman and deputy chairman CNE), and further resupply conducted on the ground, first and foremost, «Human resources and education».

In accordance with the main objectives of the operation on the personnel department were assigned acquisition unit CNH, its departments, trusts and companies managerial personnel; development of plans and measures for training and retraining of workers, employees and engineers; planning the need for specialists with higher and secondary special education for the economic council; examine the causes of turnover and measures to eliminate it, and others [2]

During the acquisition of managerial and technical personnel of the economic councils of the region was widely practiced direction of professionals from industrial centers (Moscow, Novosibirsk, etc.). Some major CNE specialists were sent in the Urals of liquidated ministries and departments. For example, the head of the metalworking industry Kurgan CNE N. Cvetov, previously worked as head of the main department of the printing industry of the USSR, Head of Logistics and Sales S. Bondarchuk, was previously deputy head of central board of the Ministry of construction and road machines. Head of Planning and Economic Department CNE A. Fastovskii came to the mound with management experience in Research Institute [4, 28].

Former employees of ministries and departments in the Urals came slowly, reluctantly. Among 71 people, directed at Tyumen CNE (19% of the total), arrived after a few months, only 21 [5] (about 6%). Most administrative apparatus of the economic council has been strengthened by this time at the expense of specialists from Novosibirsk (9 pers.) And Moscow (8 pers.). Visual representation of the personnel policy in the region provides an analysis of the economic council staffing Tyumen after one and a half months or more since the adoption of the resolution on the establishment of the Council of Ministers of the RSFSR Economic Administrative Region.

With a total staff number of 380 persons actual staffing on July 16, 1957 was 272 persons, i.e. 71.6%. Fully staffed were only two divisions of Tyumen Economic Council: Managing Fisheries and Geological Trust. Apparatus Economic Council, despite the RSFSR Council of Ministers instructed staff the Economic Council, no later than June 20, 1957, almost a month later than the target date was staffed by 58.8% (47 pers.). Worst of all was the situation with the staff in the Office of the food industry — 7 out of 25 people on staff (28%). A long time in this control could not even pick up the boss and his duties temporarily performed NA deputy chairman of the economic council Petrov [6]. Later chief appointed to this position S. Sidorov. Less than half was staffed by members of staff of the Office of logistics and marketing (13 people out of 38, or 34.2%). In it, as well as in the Office of the food industry and in building trusts worked the least number of specialists with higher education — for only two people.

Quality educational level left much to be desired. For example, in Building Trust 19 out of 24 (79%) had only a general secondary, lower secondary and, as noted in terms of «inferior» education. 9 out of 18 (50%) selected «experts» Trust light industry had a similar level of education. If even make allowances for the fact that 50 years ago the average education level was significantly lower, and even then such figures could not guard. Low educational level managers and technicians, lower manufacturing culture, the habit of living for a directive largely explain the lack of efficiency of administrative reforms of the 1950s-1960s. Only in the apparatus of the economic council (53.2%) and in the Office of the food industry (57.1%) State employees with higher or incomplete higher education was manned by half, that is, both units still in need of substantial replenishment of highly qualified personnel. [7]

On September 20, 1957 in the Tyumen Economic Council lacked one Head of Department, two deputies, three chief engineers, three heads of functional departments, nine senior economists and economists. 9 experts from the missing quantity planned to pick up in Moscow and 20 — on the spot. Former ministries and agencies at the time came 32 people (9.1% of the total range of CNE) [8].

After four and a half months — October 18, 1957 the total percentage of security personnel decreased (from 92.4% to 91.7%). Apparatus Sovnarkhoz this time possessed 78.8% of the required amount of employees. Seven units fully comply with staffing, including three industrial control and two functional department. Central accounts at this time was still running on 50% of the required full-time employees, there was no deputy chief accountant, chief economist and senior methodologist-auditor [9]. Three functional departments (production and technical, economical and financial) has 80% of the required number of people [10]. Understaffed personnel and their low educational level become an obstacle to the development of the Tyumen CHX. This is to a large extent affected the ultimate effectiveness of all its activities.

Arrived in the direction of executives and specialists (and later their families) provides office accommodation. And there are sometimes problems with the reluctance of families to leave their apartments, for example, in Moscow and move to regions of the country.

So Bureau of Tyumen Oblast Party Committee February 10, 1959 considered the issue of «misconduct executives Sovnarkhoz Comrades Suslonova, Petrova and Nikolayev «[11]. It was noted that in 1957, Comrade. Suslonov IA approved by the Deputy Chairman and member of the national economy Tyumen economic administrative region, home to the temporary residence permit without a family, although he provided well-appointed apartment of 3 rooms in Tyumen. [12].

Next, let’s analysis of its production, management. «Comrade Suslonov feeling temporary person working without proper voltage, surface solves issues of forestry and wood industries, so that for the first time in many years, woodworking enterprises of the economic council left without raw materials. He satisfactorily fulfills its responsibility for managing business selection and placement of managerial personnel, for which was criticized heavily in the meetings of the party organization CNE at plenary sessions of the regional committee of the CPSU and VIII Regional Party Conference, but the proper conclusions of the critics did not and refused to move from Moscow permanent residence in Tyumen»[13].

At that time it was a serious offense, so Regional Party Bureau decided: «For misbehavior announce that Suslonova IA reprimand to be entered in the registration card, be released from his duties as deputy chairman of the economic council and member of the national economy, and sent the grassroots work in the forest industry in the region»[14].

Similar criticism underwent another deputy chairman of CNE N.Petrov. He indicated that he, too, «living on temporary residence permit, working without proper voltage and initiatives dedicated to improving weak activity, meat and milk, especially the fishing industry does not solve the issues of expanding the production capacity of enterprises. For eighteen months Comrade. Petrov was on mission in the enterprises of the economic council just 29 days, while in Moscow — 165 days, while living there in his own apartment, received an advance report 1450 rubles apartment «[15]. For those violations of Party and state discipline N. Petrov severely reprimanded to be entered in the registration card, but take into account that it would eliminate shortcomings in the work and in the near future will carry a family in the city of Tyumen. [16] And the same proceedings for the same «sins» at the bureau chief of the regional party committee has undergone economic planning department P. Nicholas, who declared a «severe reprimand to be entered…» and took him from the Board of the national economy[17].

In this regard, quite appropriate and relevant even now expressed in words memoirs N. Khrushchev: «We’re not every government official has an ideological understanding of the case and often manifests philistine indifference, chased only for comfort, but suffers socialism» [18, 88].

Honest and conscientious workers were more and they applied considerable efforts to improve the efficiency of management. The total range of frames for Kurgan economic council in the initial period of its activity was 439 people. [19] In fact, about half a thousand people were added to the list of the most significant positions and specialists, and it carried a special control over activities and professional growth.

Thus, summing up the state personnel policy pursued during the economic councils, it should be noted serious difficulties associated with a lack of qualified, highly educated managers and professionals in the field. Personnel potential of the region was formed mainly of local business executives of enterprises and institutions. Picking Sovnarkhozes delayed, educational level professionals was low.
Attempts were made to address some of these problems through changes in the nationwide high-level and direction of their reduces ministries and agencies, other cities. About 10–12% of staffing CNE Zauralye was staffed by specialists of the former ministries and departments. Field conducted active selection and «growing» their young cadres. At the same time there have been cases of abuse by former managers of the economic councils and the unwillingness of a change of residence by family members, the fear of losing their comfortable apartments in industrial and administrative centers. Some of the visitors felt psychologically time people were in no hurry to carry out Moscow’s family and rent apartments. The majority of experts have worked in good faith.

In pondering the events of those years, F. Burlatskii wrote: «Even the toughest of his reforms — the creation of the economic councils, the elimination of many ministries and departments wore apical character. They argued to make management more rational, bring it to the objects — enterprises, collective farms and state farms and research institutions. But these reforms did not affect the essence of the relations of production, does not claim to be, to put the producer himself — worker, peasant, intellectual — to new working conditions: give him the initiative, independence, choice, the possibility of direct communication with the consumer. And thus liberate the economy weaken, and then completely remove the suffocating her press state care «[20, 192–193].

Events of the past years are forced to focus on the importance of creating a successful mind-set of employees and decent conditions of work and life, providing full and genuine autonomy initiative by labor collectives in the field — the only way possible to make a genuine and profound reform of all aspects of our reality.

Materials on theme
Creation of uniform transport system in the republic.
Growth of working class, its role and place in social structure of the republic.
Industry development.
Agriculture of Northern Kazakhstan in the context of command-administrative system of managing