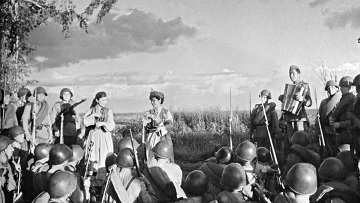 The Great Patriotic War had the most detrimental effect on the life, way of the life and work of the people. The aggression of Germany was dictated by a whole group of causes and circumstances. This causes the ideological, political, economic, military and other nature. Military reasons attack on the Soviet Union dictated complex components: the desire to defeat the Red Army — weakened repression in 1937 and not equipped with new military equipment; obtain the raw materials of the entire Soviet East; Germany to provide the necessary «living space».

In the great confrontation between the Soviet Union and Nazi Germany, all the people stood up to fight the aggressor and became belligerent people. During the war years 35 million people were involved to it. The warriors of Russian nationality were the core of the Soviet Army. Together with them, fought shoulder to shoulder 4.4 million Ukrainians, over 1 million sons and daughters of Belarus, more than 3 million — Kazakhstan and the Central Asian republics, including 1 million 366 thousand Kazakhs, i.e. more than 70% of the total male population 18 to 50 years. In world history, there was no such precedent for this. Even the Germany in total mobilization was called only 12%. (1)

From the first days of the war, thousands of our fellows joined the Red Army. The largest local military unit was 314 Infantry Division, composed mainly of Petropavlovsk people and residents of areas. Only for the first two years of war Petropavlovsk military commissar in the Red Army called about 70 thousand and also sent to the defense industry for more than 34 thousand workers. (2) Formation of 314 Infantry Division began with the arrival of the first commander (Hero of the Soviet Union, Lieutenant General) Athanasius Shemenkov with a group of officers. Commission started to work for the staffing division parts together with the secretary of the regional committee v. Nikolayev were placed division headquarters staffs infantry regiments and driven by staffing personnel in buildings Petropavlovsk. As part of the division were formed: 1074; 1076; 1078 infantry regiments, an artillery regiment 858, 374 antitank battalion, 598 separate communications Battalion, 234 separate medical- sanitary battalion, 204 separate reconnaissance and other units. Ordnance received: 76 m/m guns of old samples, 122 m/m howitzers that were in service (10 howitzers). Trucks were fully staffed. Technical communications division was provided by ten — fifteen percent. Medical arsenal and medicines were provided completely. Formed at the very beginning of the war 314 Infantry Division participated in the battles of Leningrad, in the Baltic States, Poland and Czechoslovakia, also liberated Prague. In all the major battles of World War II participated North Kazakhstan, fought in all military branches, also the partisans and underground. Contributing to the victory over fascism, many North Kazakhstan are Heroes of the Soviet Union and gentlemen orders and medals of the Great Patriotic War of 1941–1945 established during this period. (3) (52 Hero of the Soviet Union and 11 full Cavalier Order of Glory) (4).

At the beginning of the war material and technical, financial and human resources were mobilized to the needs of armed resistance to the enemy. Petropavlovsk in the early years took twenty equipment factories and other enterprises. Due to their lame doubled production capacity of the plant, walk- shoe factory, were re-created: shag and garment factories, alcohol- Vodka Factory, Factory efficient engines, several companies of metal and engineering industry of national importance, and industrial plants of the local industry. The formation of a group of defense plants: № 239 (Plant. Kuibyshev), № 347 (factory actuators — ZIM), № 641 (named after SM Kirov), № 675 (named after Mikhail Kalinin), small-displacement engine (MLD), and moreover, a number of plants light and food industries.
The price of the heroic labor of the workers in 1942, a group of defense plants started regular supply of goods for the Red Army. Many evacuees company started work in hastily adapted rooms and even under the eaves. Often to new places came barely a tenth of the staff workers, engineers and technical staff. In such circumstances, was established not only production of old products, but also a number of new weapons and ammunition. Produced mines, torpedoes, housing incendiary bombs, shells for various artillery systems, carried out machining for Katyusha rockets, small-displacement engines, insulation materials, radios, communications, etc. Totally there were 25 kinds of products, 5 of which were re-mastered in Petropavlovsk. Development of production, and then improving models of weapons was on the focus of designers, engineers, and advanced workers of enterprises. These results were achieved at the cost of hard work, hardship and adversity. People have spared no effort or resources in the name of compliance front. (5) Petropavlovsk Municipal Party Committee established a commission to device evacuated workers. All arrivals from front were placed in homes and apartments of the locals. Residents of the area with great warmth and cordiality treated the evacuees. Organizers of the Party and trade unions organized works to settle the newcomers’ enterprises. Thousands of residents came to help in these works. Money was transferred to the defense fund. Within a few months, from the beginning of the war until the end of 1941, the city had organized mass 8 works, which was attended by over 27,000 people. The total number of military families evacuated was 3690 people, 2773 people were allocated for various activities. During the winter in order to help families were given 305 tons of coal, 1800 cubic meter. (5) Processing of agricultural products was the basis of industrial production of the North Kazakhstan region. Among the largest enterprises in Petropavlovsk were meat-packing plant, tannery, felting factory, mechanical plant, a bakery, a brick factory, two large mills and a number of others. It required increasing production capacity of existing factories, as well as evacuees. The energy industry had a task that was provision of increased demand industrial industry. This problem was resolved by increasing the electricity production of the existing stations and their extensions. As well as it was mainly due to the commissioning of new power plants, and as a result of it the existing power plants started to work: Petropavlovsk CES, diesel power plant in Petropavlovsk 1942, diesel and steam power plant № 621 in Kokshetau 1942. Under construction and installation to start at the end of I quarter 1943.The first Petropavlovsk Thermal Power Station (TPS) with 5000 kW (Phase 1), and in late 1944 — early 1945 the first TPS was introduced almost at full capacity. The builders and energy, erecting powerful power plant (TSP-1), tripled the energy potential of the city and provided conditions for normal work of defense enterprises. For success in work on the construction of power stations team builders and installers in July 1944 was awarded the Order of the Red Banner. (6) The job of workers, farmers and intellectuals of North Kazakhstan region echoed with the heroic deeds of their fellows at the front.

In the harsh conditions of war has been maintained and even developed network of health, education, culture and science. Doctors and nurses would not only ensure a high percentage of returns of the wounded and sick to hospitals, but also prevented from escalating outbreaks of typhus and typhoid fever and other diseases.
The city hosted the first wounded evacuation hospital number 3813, formed in 1941 by graduates of midwifery school (deployed to 445 beds). Total in Petropavlovsk during the war were four hospital, they were placed in the premises of the first Soviet and regional hospitals, buildings, urban schools and houses of Pioneers Herzen. The second level personnel were fulfilled by graduates of medical school and doctors came from other cities or after injury. (7) Patriotism people in wartime manifested not only in work, but in many other cases. Among them are voluntary contributions of money on weapons collection and production of warm clothes and shoes for soldiers, care for the wounded, disabled and families of soldiers, aid to the population liberated from Nazi occupation areas. In addition to mandatory food supply front, fellow residents of the area sent dozens of cars with gifts. Consciously going on material deprivation, workers, farmers, and intellectuals’ area of private stock surrendered to the defense fund 204 thousand tons of grain, 48 pounds of meat, 1220 pounds of oil, 116 thousand tons of vegetables and potatoes. The 88 wagons of gifts were sent to the soldiers of the Red Army. 77 thousand different warm things were collected and sent. The material and financial assistance were provided to the 59,729 families of servicemen and disabled. 10 398 cattle, 4 cars of products, household suppliers, industrial equipment and agricultural implements were sent to the help for the liberated areas.

Underestimating Germany industrialization development, cultural change, the fact of making the national question led to the defeat in the war. USSR became the homeland of its constituent ethnic groups. And his defense was a nation-wide business. During the last war showed that the giant multinational country constitutes a single economic space, its economy was centralized and functioned as a single organism. Significant contribution to economic development and a single victory on the fronts made North Kazakhstan region.

1. M. K. Kozybaev Kazakhstan at the turn of the century: Reflections and searches (Book Two) Almaty 2000