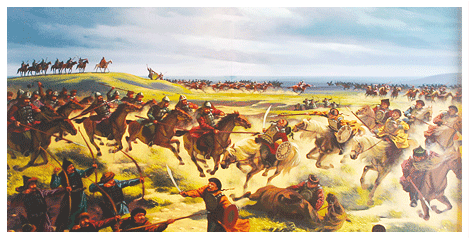 In the middle of the 18th century Galdan Cereng’s death in 1745 led to civil strife and weakening of the powerful country.

In the middle of the 18th century Galdan Cereng’s death in 1745 led to civil strife and weakening of the powerful country. Under Galdan Dzungaria turned into a powerful empire. In this period Dzungaria withstood several wars with the Chinese Empire. During the reign of Galdan his power spread over a vast area of Central Asia. The whole area of East Turkestan was a part of the empire. Kazakh, Kyrgyz and South Siberian Turkic tribes acknowledged the Dzungarian supremacy. Since 1734 Great Juz and since 1742 Middle Juz were forced to give them children of their rulers as hostages.

The Great Juz accepted Dzungarian requirements in connection with the events of "Aktaban shubyryndy", but the Middle Juz agreed with them because of other reasons. Since the mid 30’s Ablai Sultan had been growing in power and played a significant role in the political history of the Middle Juz, and then the whole Kazakh state. In one of the major battles of the late 30’s Ablai Sultan killed in a single combat Sharysh, the Dzungarian famous warrior. Sharysh was a close relative of Galdan. In revenge for Sharysh’s death and defeat, the Dzungars had been preparing a major operation against the Kazakhs. In 1741, the Kazakh nomads of the Middle Juz were surrounded by a large Kalmyk army. From the south approached the troops under Kalmyk commander Sara Manjy, in the north there were Septen troops, and in the east the troops led by the eldest Galdan’s son Lama Dorje. These events, connected with capture of Ablai Sultan, called “Suzekynyn koly” (“Suzeky” means fishing tackle).

In the Kazakh legends it is said that there was a small Kalmyk group of special purpose, led by old Zhalby Batyr, and aimed by all means to find Ablai. That's why this operation was called "Suzeky." Zhalby caught Ablai in the Ulytau Mountains.

After capturing of Ablai the Kazakhs sent to Dzungar residence 90 beys and batyrs led by Kazybek bey and Malaysary Batyr. During the negotiations between the Kazakhs and Kalmyks they reached an agreement. Kazakh folklore contains a lot of information related to these negotiations and the relationship between Galdan and Ablai. When the Kalmyks captured Ablai, Galdan said, “I'll kill you in revenge for Sharysh, the same Batyr (hero) as you. Tell me, what is your last wish?” Then Ablai answered: “Sire, I have only three wishes. First, I killed Sharysh in a fair fight on the battlefield. But you captured me sleeping. I wanted to die in the battle between the Kazakhs and Kalmyks. Second, the Kazakhs are nomads not accustomed to settled life. I want to make them sedentary to the land and give them back their cities, and then to die would not be sorry. Third, in my family only one man was born in each generation. If I die now, having no sons, then my genus will disappear."

After these words Galdan lowered his head and sat long in thought. Then, turned to his vizier and said in his own language, "All he said is true, especially the last one. I'm also the only man in my family. If something happens to my son and my family will be broken." Then Ablai exclaimed "your Highness" and stood up. "Why do you speak such way, unless I gave you your freedom?" - asked Galdan. "Sire, I understand your language," - said Ablai - "You have likened me to your son, isn`t that freedom!"

Prominent role in release of Ablai and establishing of peaceful relations with Dzungaria played the Supreme Khan of the Kazakhs in the 30-60’s Abulmambet.

During the reign of Abulmambet a strategy of international relations was formed, which then was used by Ablai Khan. It was most clearly demonstrated in the 40’s of the 18th century. In 1740, in Orsk fortress Abulmambet Khan gave an oath of allegiance to Russia.

Signing a contract with Urusov, Abulmambet and Ablai counted on promised help and support of the Russians in fight against Galdan Cereng. But in the early 40's of the 18th century, when Kazakh nomads of the Middle Juz suffered massive attacks from the Dzungars, they did not find support from the Russians. In 1742 Abulmambet had to give his son Abulfeiz as a hostage to Galdan Cereng. Because of this Ablai Sultan was released from captivity. Abulmambet returned control of the cities of Turkestan. Further his life was spent in this city - the capital of the Kazakhs. In the summer, he moved to Saryarka.

Galdan’s death in 1745 led to the collapse of Dzungarian state. He had three sons. The eldest son Lama Dorje was 19 years old, the middle son Cewang Dorje (Ajahan) was 14 and the youngest only 8. When Galdan died, many members of the elite were afraid of adult and experienced in military affairs Lama Dorje, and elected the middle son as a ruler of the state. Lama Dorje was born of a concubine. Subsequently, Debachi and Amursana also wanted to seize the throne. Thus began prolonged internecine strife in Dzungarian Khanate, which ended with its complete collapse and destruction of most of the population. The Kalmyks disappeared among other nations. The internecine strife between the Dzungarian rulers provoked the Chinese troops to enter Dzungaria.

Use of materials for publication, commercial use, or distribution requires written or oral permission from the Board of Editors or the author. Hyperlink to Qazaqstan tarihy portal is necessary. All rights reserved by the Law RK “On author’s rights and related rights”. To request authorization email to mail@e-history.kz or call to 8 (7172) 57 60 13 (in - 1163)
Қазақша Русский English
MOST READ
Month Year
Recorded history of Kazakhstan. Part 2
Heroic mothers of the great steppe
How had the World War II been started?
Philosophy of the Emblem
14 monuments at Tekturmas
The rural akims: the country's hope is in the elections
Kazakh historical drama Tomiris premiered in Istanbul
Stolypin about the worries and hopes of immigrants to the Kazakh steppes
ALASH IDEA IS THE PROTECTION OF KAZAKH STATEHOOD
A tireless explorer of the Kazakh land
SWITCHING TO THE LATIN ALPHABET – UNITE ALL KAZAKH PEOPLE
Kunaev Dinmukhamed Akhmedovich
People who eat horses will kill you