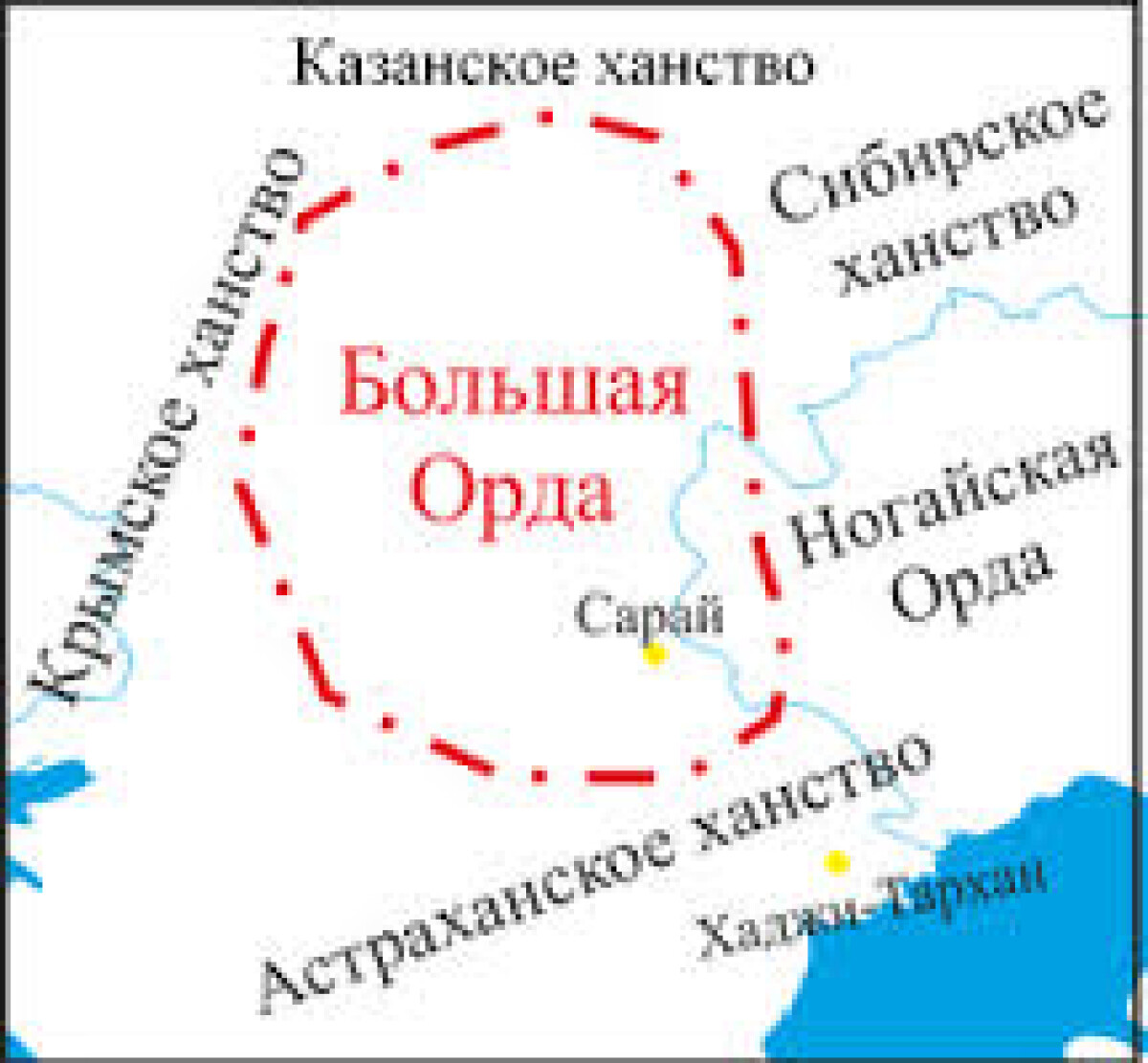 White Horde is a feudal state existed on the territory of the Dasht-i-Kipchak in the middle of 13th - early 15th centuries.

White Horde is a feudal state existed on the territory of the Dasht-i-Kipchak in the middle of 13th - early 15th centuries. The territory of the White Horde formed in the result of its separation from the Golden Horde. It covered the eastern part of the Jochi Ulus (left wing), which was a vast area of present Kazakhstan, except Zhetisu, to the east of the Ural River and to the north of the Aral Sea and the Syr Darya River. The White Horde was under the rule of Batu Khan and his successors. Batu’s older brother Orda Ichen inherited the residence of his father Jochi, the Blue Horde, located in the upper reaches of the Irtysh River near Lake Alakol. The capital of the White Horde in the 14th century was Sygnak.

The first Khan of the White Horde was Sasy-Buka Sultan. After his death, his son Erzen Khan inherited him. The time of their rule was represented by the struggle for independence of the territory of East Dasht-i-Kipchak from the power of the Golden Horde. In the second half of the 14th – first half of the 15th centuries the White Horde Khans had to wage war with their powerful neighbors.

In the late 50's of the 14th century the Chagatai Khanate was divided into western and eastern parts, which became independent states. The eastern part called Moghulistan. Moghulistan included the territory of East Turkestan. It should be noted, that the boundaries of Moghulistan were not constant. East Turkestan was part of the Timurid state, then again fell under the rule of Moghulistan. According to "Tarikh-i-Rashidi" of Mirza Muhammad Haidar, borders of Moghulistan were: "eastern border is adjacent to the Kalmak lands .... In the north, it runs along the Kokcha-Tengir (Balkhash), Bum and Karatal; in the west Moghulistan borders with Turkestan and Tashkent; in the south with the vilayet Fergana, Kashgar, Aksu, Calis, Turpan."

The main occupation of Moghulistan population was nomadic and semi-nomadic pastoralism, semi-sedentary agriculture.

Moghulistan was a public and political association of local Turkic and Turkicized Mongol tribes, merged with the local population and formed the ethno-political community - the "Moghuls." The Moghuls included such tribes as the Dughlats, Barlas, Bulgagi etc.

Another state appeared in the 15th century and strengthened after the fall of the Golden Horde and the weakening of the White Horde was the Nogai Horde. The Nogai Horde was a feudal confederation of nomads. It covered the territory to the north of the Caspian and Aral seas, from the Volga River to the Irtysh. The main tribes of the Nogai Horde were the Manghits, Hongirats, Naimans, Argyns, Kanly, Alshins, Tama, etc. The capital of the Horde was Saraychyq, located in the lower reaches of the Yaik River. It was a major point of transit trade on the route from the Black Sea to Central Asia.

The main occupation of the population was nomadic pastoralism. Crafting and architecture were developed.

The Nogai Horde was divided into uluses, headed by Mirzas. Emir was a supreme ruler. Between uluses, tribes and clans was an internecine strife for pasture lands and political power in the Horde.

Tribes and clans inhabiting the Nogai Horde were directly related to the formation of the Kazakh nation.