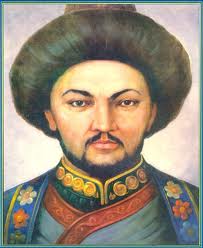 At the 20’s of the 15th century on the whole territory of the White Horde there was a change of the ruling dynasties.

At the 20’s of the 15th century on the whole territory of the White Horde there was a change of the ruling dynasties. As the result of the struggle between the Genghisids and the nomadic elite the power in the state transferred from the former descendants to the later ones. The emergence and expansion of this struggle was caused by the weakening and decline of the White Horde due to many political and socio-economic reasons. The main reasons were: continuing from the second half of the 16th century collapse of the Golden Horde, the aggressive policy of Emir Timur and the Timurids and loss of the cities on the Syr Darya River at the time of unrest and strife in the Shaybanid Ulus. During the wars and strife on the territory of East Dasht-i-Kipchak in the first quarter of the 15th century, Shiban’s descendant, Dawlat Shaykh’s son Abu’l-Khayr Sultan rose to prominence. After the reign of Jumaduq Khan, in 1428 he was proclaimed as a Khan of West Siberia. Abu’l-Khayr (he was 17) was supported by about 200 representatives of major tribes and clans (Kipchaks, Naimans, Manghits, Karluks, Hongirads, Kangly, etc.). However, the internecine strife was not stopped under his reign, lasted for forty years (1428-1468). The territory of East Dasht-i - Kipchak remained politically fragmented. Abu’l-Khayr Khan only in the mid 40’s of the 15th century annexed the steppes of former Ulus of Orda Ichen up to the Irtysh River and the north- western Balkhash. Most effort and time required for submission of southern regions of the White Horde, which included the Karatau Mountains region, the lower reaches of the Syr Darya, steppes of the northern Aral Sea and land between the Ural and Emba. Abu’l-Khayr Khan gathered considerable forces for a campaign against the Timurids. The main reason for the campaign to the area of ​​the lower Syr Darya was not only a dynastic struggle, but also the need to occupy winter pastures near the Syr Darya and Aral. Capturing of the lower reaches of the Syr Darya could open the way to the cities of Turkestan, which were very important in strengthening of the power of the nomadic state.

The battle occured in 1431 in the locality, called Ikri – Tuk. The Timurids were completely defeated. A large number of prisoners and goods (horses, camels, tents and weapon) were captured. Next Abu’l-Khayr Khan's victory was achieved only after 15 years in 1446, over Mustafa Khan in Atbasar. Abu’l-Khayr Khan's mind was turned to the south and south - east (Zhetysu), particularly to Transoxiana. In 1430 he took Khwarezm for a short time and sacked Urgench. In the 1447 he raided on Samarkand and Bukhara and captured several cities in the middle Syr Darya. Sygnak surrendered to him voluntarily. Abu’l-Khayr understood that taking control of the Syr Darya cities, which were industrial and commercial centers, could strengthen the Khanate. The quick occupation of the Syr Darya cities can be explained by the fact that he relied on the forces of his supporters in Dasht-i – Kipchak and on his own power strengthened over 2 decades of his reign. The ruling elite of these cities got used to support one side and change to the other, thereby somehow provide their towns safe.

Sygnak was the capital of the Abu’l-Khayr Khanate. In 1456-1457 Abu’l-Khayr was defeated by the Kalmyks under Sygnak and was forced to leave the Turkic devastated lands and move to Dasht-i - Kipchak. Only in the early 60’s Abu’l-Khayr again had the opportunity to move in Syr Darya and recapture its cities. The reason for being defeated by the Kalmyks lies in the weakness of his internal state. Constant dynastic feud and infighting between the Genghisids, separatism of nomadic elite, clans and tribes, contradictions between the feudal elite and the masses of ordinary nomads and semi-nomads, internal and external wars led to the complete collapse of the state. In 1468 Abu’l-Khayr died during the campaign to Zhetysu.

With the formation and consolidation of the Kazakh Khanate, the Shaybanids in East Dasht-i - Kipchak declined in their power.

Use of materials for publication, commercial use, or distribution requires written or oral permission from the Board of Editors or the author. Hyperlink to Qazaqstan tarihy portal is necessary. All rights reserved by the Law RK “On author’s rights and related rights”. To request authorization email to mail@e-history.kz or call to 8 (7172) 57 60 13 (in - 1163)
Қазақша Русский English
MOST READ
Month Year
Burial mounds of the southwestern part of the Semirechye region
Union of the Archives and Library
The referendum on the Constitution is a significant stage of democratization
Heroic mothers of the great steppe
Philosophy of the Emblem
14 monuments at Tekturmas
The rural akims: the country's hope is in the elections
Kazakh historical drama Tomiris premiered in Istanbul
Stolypin about the worries and hopes of immigrants to the Kazakh steppes
ALASH IDEA IS THE PROTECTION OF KAZAKH STATEHOOD
A tireless explorer of the Kazakh land
SWITCHING TO THE LATIN ALPHABET – UNITE ALL KAZAKH PEOPLE
Kunaev Dinmukhamed Akhmedovich
People who eat horses will kill you
Kazakhstan's participation in the Winter Olympics has a long history
Materials on theme
Political history
White Horde
Moghulistan
Nogai Horde