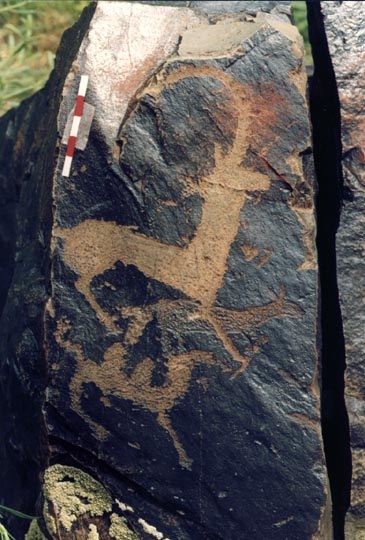 In Indo-Iranian conceptions the earth was square shaped or round. Therefore round barrow with the grave in the centre was the analogy of the world.

The sense and many andronion notions of religious ceremonies and different rituals become clear by the help of comparing archeological data and information that was picked up from old-Iranian writings.

In the graves all buried are oriented by the head to the west or south-west. And this is not accidentally. In Indo-Iranian conceptions the earth was square shaped or round. Therefore round barrow with the grave in the centre was the analogy of the world. Each side of the world was managed by their own god so the orientation to the west was the orientation to the god who had the connection with the other world.

Andronions put in the grave a corpse in the writhed shape. Earlier such pose had the explanation that people feared dead man and tied him in a dream pose. However in ancient literature told that the earth lies dead as mother lies son, and in the future he will be restored to new life. Therefore it is possible to assume that the writhed pose of the dead man in a grave — is a pose of the baby in a womb of mother earth. And in order to give to dead man this pose he was picked up. God of death Hole were called as "connecting dead persons"   and represented holding a rope.

Along with burials of dead men andronions used cremation — burning of corpses connected with a cult of fire. However the remains of bones, ashes and coals in graves differ in their purpose. At the early period ashes and coals were the remains of fiery rituals of a corpse burning. At the late time ashes and bones — traces of cleaning bonfires.

Sometimes archeologists meet the remains of pair burials of men and women once lying in embraces of each other. It was considered that women were killed and put in a grave together with men. But it not so, according to the ancient texts it is became known that the woman, usually the wife, chose itself what she wants to be alive or go to the next world together with died husband. But this custom didn't gain a wide spreading and was carried out symbolically — for an instant the wife laid down near died husband in the grave, and then left from there, or instead of itself threw into a grave the cut-off braid.

Numerous ceremonies and rituals were assisted in andronion daily life too, filling the real world of their life with gods, ancestors, heroes.

House construction began with sacrifice also. Vessels with milk, a bull or a ram was sacrificed as a victim. They ate meat, drank milk, and dug pots and bones on a place of future dwelling — near the center, under a rod post or under a threshold. The cases when children were sacrificed and buried under a house floor are known. At roof construction the top beam was sprinkled with sacrificial animal blood and they made a feast. The main rod symbolized connection of people with the sky. In holidays it was decorated with flowers, and during weddings the groom and the bride sat at that rod, and in usual days in this place of honor the elder sat. Family hearth had special respect which was considered as a family shrine.  Hearth’s destruction was considered as the most terrible act. Sacrifices were made to the hearth: coming to the house bride was led round it, and before funeral the dead was also carried round it too. To throw ashes away from the house was forbidden therefore special ashpits were arranged near the dwelling. All these ceremonies with fire and ashes were made with the aim to deserve health, wellbeing and wealth for family at gods.

Drawings on stones.  In many respects the religion has also defined art development.  So, stone figures of gods were made with big realism and art taste.

Rock paintings of an era of bronze are peculiar: on the smooth surfaces of rocks covered with a black clay crust ancient people by the pieces of a firm stone beat out images of animal, chariots, scenes of battles. It is the most valuable source of human’s spiritual culture, his world view. Kazakhstan — one of the richest places on number and a variety of rock paintings — petroglyphs. Remarkable on their wealth Tamgala, Eshkiolmes, Karatau, Maymak's drawings, Tarbagataya, Bukentau were studied by archeologists and became the property of world culture.

At the time of Bronze Age people were at a mythological stage of thinking. For ancient people life was the change of repeating nature cycles— a spring equinox, a plowed land, autumn harvesting, cattle lambing, winter and then again spring plowed land, spring arrival of the warm sun. In order not to break the harmony, each of such events should be accompanied with sacrifices to gods, prayers and special ceremonies. The last occurred in special sanctuaries, in secluded places: in mountain gorges, at sacred springs and small rivers. During an era of bronze and later such sanctuaries were at rocks, and drawings reflected andronion ideas of world around. As a rule, sanctuaries were used within many centuries. Not only people of an era of a neolith and bronze beat out and cut out drawings on rocks, but later too — up to the XIX century. Therefore in congestions of drawings using certain techniques scientists allocate different in time groups or layers.

Scientists carried a number of drawings, plots and compositions to the bronze period. One of most often met images in andronion petroglyphic art — a wild bull round with the bent extended forward horns, frequently with an underlined hump at shovels, with a powerful body and strong feet. Their first images appeared during a neolith era.

Except aurochs there are met the image of a house bull. He is represented in a team in scenes of a plowed land or shown put to a vehicle. Recognizing that andronovets are Indo-Iranians, it is possible, being guided by myths and religious literature of ancient India and Iran, to decipher contents of some petroglyphs. In myths about the Universe creation is said that the world is created from parts of the first-born bull sacrificed by solar god Mitra. Mitra is compared and identified with a bull. On one of mountains drawings an anthropomorphous being Eshkiolmes Mitra with sunshine surrounded head is shown standing on a bull. On a number of sanctuaries the ancientpeople represented scenes of worship to the sunny head Mitra. In Tamgala's natural boundary the sunny head person is includedby dancing little men, and also single and pair dancers. Everything together they execute ritual dance. By the way, the round dance — is a sun symbol, and movement of participants — imitation of shone rotation in the sky.

The image of a bull is connected with idea of fertility, power and force.

Favourite plot in petroglyphic art — a two-humped camel the Bactrian. During a bronze era it was represented in a static form, and quite often in many scenes took a ritual place. It was ancient Iranians'embodiment of thunder god Veretragna, and at Hindus — Indra. PowerfulVeretragn which in an image of a camel "possesses the greatest force, the greatest power" is glorifiedin Iranians sacred book "Avesta".

Among bronze age petroglyphs the image of chariots is widespread. Karatau mountains’ rock paintings are counted in total 49 chariots carvings, thery are in Tamgaly, mountains Eshkiolmes. Simple two-wheeled hunting and fighting chariots are shown on the majority of them. All of them are represented in a uniform mannerreminding a vehicle with sorted and put on the body sides wheels. Draft animals are horses, and more rarely camels. There is the myth among Iranians about a heavenly solar chariot connected with a horse and a chariot. They believed that all highest gods drive about on the sky on horse chariots.

Among the drawings there are met plowed land scenes with the image bulls, horses and goats put to a plow. The plow is followed by the person. Probably, these scenes are connected with celebration of New year, with a spring solstice, a holiday of updating of the nature, with fertility. Important part of a holiday was carrying out the first furrow. This act had to guarantee a rich crop. The right of carrying out the first furrow was provided to the tsar therefore in "Avesta" it is said that the Supreme god Akhura Mazda handed over to the first tsar of Iranians Yima "A gold plow" that he opened the earth. Idea of a gold plow and the first furrow is characteristic for many nations. It should be noted that echoes of ancient representations, often in the changed look, remained at Kazakhs and others Kazakhstani nations.

2. Krivtsov-Grakova O. A. Alekseevsky settlement and burial ground//Tr. State. I used up. Muzeya M.T. XVII. 1948; Sorokin V. S. Burial ground of a bronze era Tasty-Butak I in the Western Kazakhstan//Materials and researches on archeology. 1962 . No. 120.

© History and Ethnology Institute of Ch.Ch.Valikhanova of KN of MES RK, 2013

Use of materials for publication, commercial use, or distribution requires written or oral permission from the Board of Editors or the author. Hyperlink to Qazaqstan tarihy portal is necessary. All rights reserved by the Law RK “On author’s rights and related rights”. To request authorization email to mail@e-history.kz or call to 8 (7172) 57 60 13 (in - 1163)
Қазақша Русский English
MOST READ
Month Year
Recorded history of Kazakhstan. Part 2
Heroic mothers of the great steppe
How had the World War II been started?
Philosophy of the Emblem
14 monuments at Tekturmas
The rural akims: the country's hope is in the elections
Kazakh historical drama Tomiris premiered in Istanbul
Stolypin about the worries and hopes of immigrants to the Kazakh steppes
ALASH IDEA IS THE PROTECTION OF KAZAKH STATEHOOD
A tireless explorer of the Kazakh land
SWITCHING TO THE LATIN ALPHABET – UNITE ALL KAZAKH PEOPLE
Kunaev Dinmukhamed Akhmedovich
People who eat horses will kill you
Materials on theme
Children burial rituals at Andronovo tribes
Builder is an ancient profession
Bronze era (XXVI-VIIIVV. BC)
On the question of the influence of paleoclimatic conditions on the socio-historical process on the territory of Northern Kazakhstan in the Bronze Age