Old Guz - the first capital of the Oguz Khans 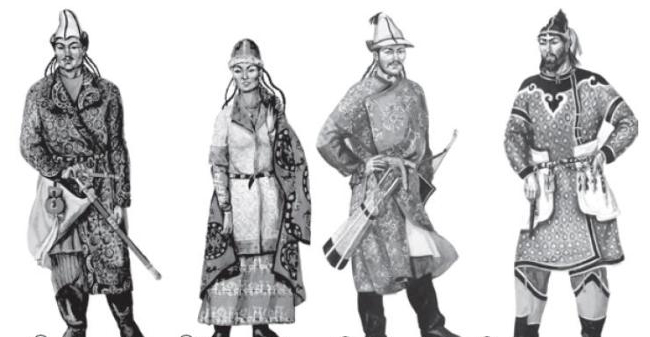 In the second half of the 8th century, Oguzes lost war with Karluks for the Turgesh heritage forcing them to leave the territory Zhetisu and go to the foothills and the valley of the River Chu.

In the second half of the 8th century, Oguzes lost war with Karluks for the Turgesh heritage forcing them to leave the territory Zhetisu (Seven Rivers) and go to the foothills and the valley of the River Chu. In the new land, they had to continue fighting for a living space. However, this time their enemies were Kangar-Pecheneg tribes, who beat the leaders of Oguzes at the beginning of the 9th century, teaming up with former adversaries, Karluks and Kimeks. Their trophy was Syr-Darya and the Aral Sea steppes, the former owners of which, representatives of Kangaroo Pecheneg tribes, were forced to go west.

However, this did not stop Oguzes. At the end of the 9th century, they entered into an alliance with Khazars and won in an unequal battle taking possession of the territory between the rivers Ural and Volga. Thus, a substantial part of the territory of the present-day Kazakhstan was under the control of Oguzes, which is known from Arabic sources as Mafazat al-Guzz or «the Oguz Steppe».

Initially, the center of the Oguz group was the Seven Rivers region, but in the course of their movement to the west, where they struggled against Khazars and the Volga Bulgars, their territory expanded with the nomadic and semi-settled population of the West and South Kazakhstan.

In the 10th century, the capital of the military-political alliance of Oguz tribes became Yangikent (or so-called New Guz), lying at the crossroads of major caravan routes running through the steppe to the Kimak valleys of Sarysu, Kengir, Ishim and Nura. The city was at the center of trade routes leading to Sygnak and the South Urals. In addition, Yangikent had a favorable geographical location bordering on large agricultural oases of Central Asia, with Khorezm and Mawarannahr.

The supreme Ruler of the Oguz state in the 9th and 11th centuries had the title of Jabgu (Yabgu). This suggested that they were heads of the independent state and they did not consider themselves able to bear the title of Kagan. The Oguz Jabgu had deputies called Kul-Erkins. An important role was played by the leader of Oguz troops who had the title of «syubashi». He relied on a military council. The troop leaders intervened in political events and sometimes even opposed Jabgu [1].

The power of the supreme ruler was hereditary, and their children had the title of «Inals». In childhood, they were brought up by specially appointed guardians, Atabeks. The Oguz Jabgus’ and other Turkic rulers’ wives had the title of «Khatun» and played a significant role in the life of the court.

Oguz khans were elected at the Council, which is transformed relicts of the people assemblies of a military democracy era. However, such councils were rarely gathered, and the main role in the daily life of the nobility was played by the council of the noble (Kankash). In those cases, when the people’s congresses were convened, the main topics were brought up by Oguz aristocracy.

The Oguz rulers were elected from the most powerful Urugs of the khan and election itself was held in compliance with the torus, a set of unwritten rules of the customary law. It was based on the privilege for power of an older man over a younger family member [2].

The residences of khans, who headed large associations, were fortified headquarters, where they kept the treasury and supplies.

The first mention of the state of Oguzes was found in Arabic historical and geographical writings of the 9th century and the beginning of the 10th century. Thus, the researcher al-Yakubi described their wars with neighboring Turkic tribes: Karluks, Toguz-oguzes and Kimaks. Some interesting facts about Oguz tribes of the 9th-10th centuries were described in a geographical work by Ibn al-Faqih, which states that Oguzes, together with Kimaks and Toguz-oguzes were «kings» (maliks) and were highly esteemd by Turks [3].

As Arabic sources say, before the conquest of lower reaches of Syr-Darya and the Aral Sea region by Oguzes, the Oguz dynastic rulers had a residence, which was called the Old Guz. It was described as a capital city. Presumably, it was located between the western spurs of the Tien Shan, the Chu River and the Syrdarya Karatau [4].

Use of materials for publication, commercial use, or distribution requires written or oral permission from the Board of Editors or the author. Hyperlink to Qazaqstan tarihy portal is necessary. All rights reserved by the Law RK “On author’s rights and related rights”. To request authorization email to mail@e-history.kz or call to (7172) 79 82 06 (ext.111)
Қазақша Русский English
MOST READ
Week Month Year
Symbols of people's hope and dreams Armenians and their kinship with the Kazakh people Aytys between Suyunbay and Katagan Nurtas Ondasynov. Kunayev’s Chief Doctors-comrades-in-arms of A. Bukeyhanov Today is Kazakhstan Police Day
Kenesary Khan is the Last Qazaq Sultan The Second World War: Akmolinsk and its Heroes Northern Qazaqstan is the birthplace of the first domesticated horses “Diwan Lughat al-Turk” or “The Compendium of the Turkic languages” of Mahmoud Kashgari Raymbek batyr is a determined defender of Qazaq interests Ayteke bi is a law expert of the Great Steppe Qazaq poet Kuandyk Shangitbaev: is he equal to Alexander Pushkin? History in Symbols Love and Marriage Story of Sabit and Maryam Gabit Musrepov is a man, who was born under a lucky star Kanysh Satpayev’s faithful Muse Sacred sites of Turkestan