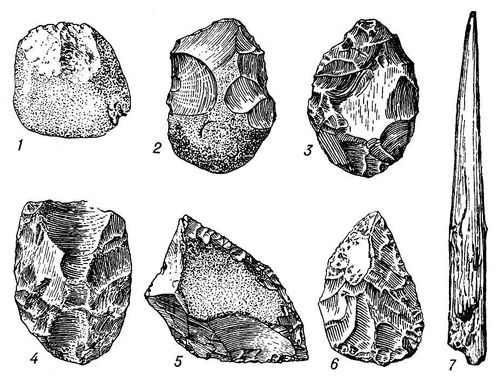 Early Paleolith divides into three major epochs: Olduvai (2.6 million years - 700 million years ago), the Acheulean (700 thousand - 150-120 thousand years ago) and Mousterian (150-120 thousand - 35-30 thousand years ago). During the whole Stone Age dominant role in the manufacture of tools belonged to the stone.And therefore on sites we find its products, except the neolith, where tools started being made of animal bones. The person knew well properties of the stone.Most often the choice of a material depended on purpose of tools. Depending on a form and characteristic types stone products are subdivided on choppers, scrapers, points, chippers, drills, knives, awls, etc.

Number of the most ancient instruments of labor treats to massive rectangular flint flakes, found near the village Konyrdek in thickness of cemented conglomerates, forming the lower quaternary, the highest terrace above the floodplain River Arystandy in the south-western slopes of  Karatau. These ancient tools of so-called сlekton type differ from the later ones by disproportionately large impact tubercle occupying more than half area of the flake.And large flint blanks, nodules, cores which were repulsed by these flakes were with them. The greatest interest is represented by Borykazgan and Tanirkazgan's being at flat top and put by tacked pebbles, dolomite, siltstone and other breeds. Whereabouts is located to the north-east of the Karatau in Talas district of Zhambyl region. Distribution of tools in these sites is accurately limited, outside a certain border the processed silicon products are met seldom. Inventory of the ancient Paleolithic Borykazgan and Tanirkazgan X. A. Alpysbayev divides into four groups: bilateral and unilateral chopping tools, archaic massive flakes, cores and large nodules. The first group predominates. Chopping tools are not significantly different from the rough stone implements of the Abbeville (preacheulean) -Acheulean localities of South-East Asia and Africa. They almost always have an explicit undulatory shape, one end of products is processed, sharp, and the other one is preserved by pebble crust or slightly modified.

In the lower Paleolith man used another stone for splitting a stone, just hitting them one against other. This technique is called upholstery technology or pebble culture, because raw material in most cases serve as a common river pebbles. Later came rumble strips which allowed achieving the best results. They are often cylindrical or round shape with numerous traces of dents and downtroddenness. For example, the instruments identified by X. A. Alpysbayev in Karatau, were processed by the aforementioned technique. A pebble served as the raw material for the manufacture of tools. While processing tools deliberate strikes occurred on both sides of the stone and thereby get a tortuous working edge. The resulting tools were used subsequently as chopping. Study results of the Karatau ridge stone tools contradict the basic provisions of Movius, who advanced the hypothesis about the existence of two local regions in the Lower Paleolithic. For one of them, he attributed Indian subcontinent, Southern and Western Europe, the Near East and Africa, the inhabitants of which are specific to the use of hand-axes. Another area is the north-western India, Upper Burma, China and Java, which is characterized by bilateral and unilateral chopping tools for the industry. On the basis of the found stone tools in the Southern Kazakhstan X. A.Alpysbayev draws the following conclusion:  "The fact of joint stay of two and unilaterally chopping tools and hand axesdoesn't allow us to agree with statements about existence of absolutely special lower Paleolithic Asian culture and about an originality of Asia development’s ways during the bottom of Paleolithic era ". The similarity and identity of materials from southern Kazakhstan with the instruments of labor which have been found in Asia and Africa, allow us to suggest about unity of Lower Paleolithic cultures’ development,in which change and evolution went in uniform way.

Monuments of acheulian time were found in the Central Kazakhstan. The tools were made from silicon breeds of black and gray-green color. One of these sites - Kudaykol - is located in the north-eastern outskirts of Sary-Arka. Among the guns can be identified bifaces, that is guns on both surfaces of the treated stone, scrapers designed for the manufacture of animal skins and wood processing, and also numerous nucleuses – small cores from which flakes and plates were cleaved and used as weapons. Zhaman-Aybat is one site of the Central Kazakhstan that deserve attention among other acheulian monuments. It was revealed in the Dzhezdinsky district of the Karaganda region and is located in 150 km from Dzhezkazgan and Obalysay. Amidst the collection of stone products stand out chopping tools with traces of weathered.

The oldest monument in the East Kazakhstan is currently considered to be the location of Kozybai discovered by the author in the field season of 1989. The site is situated on the bank of River Kolgutty, near the village of Karatogay on Kurchum district. The stone products made by hand of the primitive person,including chopping tools, instruments with double-sided processing and flakes from siliceous breed of black color found on the slopes of high terraces of manufacturing site Kozybai.

In the next period - Mousterian -there was other equipment of stone processing, but in some places still existed pebble. Similar monuments are known much in the territory of the Southern and Central Kazakhstan, and they found reflection in publications.

One of these monuments is a multi-layered site, found by X. A. Alpysbayev in 1958 and later named after the kazakh scholar and educator Ch.Ch. Valihanov. Parking lot contains five cultural layers, in which stone tools, fire pit and hearths, animal bones of horse, bison, saiga, antelope and deer were found. Layers settle down horizontally, at various depths from a modern surface of the right coast of river of Arystandy in the Algabass region of the Southern Kazakhstan area. This is currently the only site on the territory of Kazakhstan, stone products and other cultural and community remains of which are still in initial situation, in such look what it was left by the person in the Mousterian period. The complexity of the excavation is that the cultural layers lie at a depth of 1.30 - to 7.20 m. But despite this circumstance, it was succeeded to receive the new certificate on life of primitive hunters: to dig out a workshop on production of instruments of labor and on the basis of  it to draw a conclusion that people continuously occupied parking during a long interval of time, in fact from the mousterian and upper paleolithic era ending.

New monuments of mousterian period were found by us in 1984 in the Agadyr region of Zhezkazgan area. These are sites Ogiz Tau I and II, Ulken Ak-May. Stone products of them lie on a slope of small heights at a spring. Dwelling of people in this district was promoted by proximity of a raw material and spring existence.

Revealed axes of unilateral and bilateral processing, scrapers, notched tools and cores are made from local raw materials – gray quartzite. Many artifacts have been used secondary in the following epochs, as evidenced by the presence of "fresh" chips on the stone products.

The presence of proto prismatic cores along with discoid, and also the wafers with symmetrical edges with flakes of triangular form testifies the progress in the technique of stone. The typological analysis of stone stock allows dating collections of early Mousterian sites, and possibly the acheulean era. On many paleolithic sites of the Central Kazakhstan the stone stock is on a surface of the soil and in initial bedding.  A.G. Medoyev notes: "This phenomenon is caused by insignificant scales of a denudation and accumulation in the Sary-Arka in Anthropogenic times."

The particular interest is represented by paleolithic monuments of the Western Kazakhstan, in particular, located on the peninsula of Mangyshlak. All sites earlier opened by A.G Medoev and later by J.C Taymagambetov, are located on the grounds of the marine terraces of the Caspian Sea.

Site of Onezhek group include seven locations which are situated closely to each other, but contain distinctions in stone stock. Almost all of them present early and late forms of tools and therefore it is difficult to dismember them immediately. It is obviously possible only in the comprehensive and careful analysis of the industry. Final results make it possible to trace the evolution of technology in the processing of stone at some stage.  Monuments were revealed on ravine boards at the mountain Onezhek. The area abounds with silicon output that affected the industry of site. From stone products were distinguished cores, scrapers, bifaces, javelin and a large number of flakes, there are also large chipped Levallois. There are blanks among the cores, intended to relieve Levallois plates of 30 cm long. The industry of Onezhek is characterized by the presence of cores and symmetric plates with different shapes (triangle, square) and the small number of well-crafted pieces.  Distinction of tools by size and nature of processing is explained by stay of people during the different periods of the Paleolith.

The ancient people of Kazakhstan were contemporaries of Pithecanthropus and Sinanthropus, in the evolution corresponding to Homohabilis phase. Karatau's primitive inhabitants already could get and support fire, were engaged in hunting for large and small animals and collecting vegetable food.

© Institute of History and Ethnology named Sh.Sh.Valikhanov, 2013y
Use of materials for publication, commercial use, or distribution requires written or oral permission from the Board of Editors or the author. Hyperlink to Qazaqstan tarihy portal is necessary. All rights reserved by the Law RK “On author’s rights and related rights”. To request authorization email to mail@e-history.kz or call to 8 (7172) 57 60 13 (in - 1163)
Қазақша Русский English
MOST READ
Month Year
Burial mounds of the southwestern part of the Semirechye region
Union of the Archives and Library
The referendum on the Constitution is a significant stage of democratization
Heroic mothers of the great steppe
Philosophy of the Emblem
14 monuments at Tekturmas
The rural akims: the country's hope is in the elections
Kazakh historical drama Tomiris premiered in Istanbul
Stolypin about the worries and hopes of immigrants to the Kazakh steppes
ALASH IDEA IS THE PROTECTION OF KAZAKH STATEHOOD
A tireless explorer of the Kazakh land
SWITCHING TO THE LATIN ALPHABET – UNITE ALL KAZAKH PEOPLE
Kunaev Dinmukhamed Akhmedovich
People who eat horses will kill you
Kazakhstan's participation in the Winter Olympics has a long history
Materials on theme
The historiography of the problem of archaeological definition of the Eneolithic of North Kazakhstan and Transural region
What did ancient man do?
Kazakhstan in ancient times
On the question of Botay ceramics’ origins