1997
The Archaeology Museum at the Institute of Archaeology of the Academy of science of the Kazakh SSR was opened to visitors in 1973.

The Archaeology Museum at the Institute of Archaeology of the Academy of science of the Kazakh SSR was opened to visitors in 1973. From June 2010 the museum has become part of the State Science Museum and the Republic State Enterprise, Gylym Ordasy. The museum is a warehouse of priceless treasures of material and spiritual cultures of the people who occupied the ancient territory of Kazakhstan. There are many unique exhibits from excavations of burial grounds, settlements, and ancient cities of Kazakhstan in the collections of the museum.

The establishment of the Archaeology Museum is directly connected with the work of several generations of Kazakh scientists starting from the 1920s, such as Alkey Margulan, Akay Nusupbekov, Alisher Akishev, Khasan Alpysbayev, Mir Kadyrbayev, Anna Maksimova, and Karl Baypakov. The research work carried out by these scientists throughout the country over many years has resulted in a rich collection of unique materials perfectly illustrating the ancient and medieval history of Kazakhstan.

The museum exhibition is spread across three halls: the first hall features exhibits from the Stone Age, Bronze Age, and early Iron Age.

The Stone Age is a broad prehistoric period during which stone was widely used in the manufacture of implements with a sharp edge, a point, or a percussion surface. The period lasted roughly 3.4 million years, and ended between 4500 BC and 2000 BC. The museum collection of the Stone Age contains artefacts of four periods: early Palaeolithic, Mesolithic, Neolithic, and Eneolithic. On display are stone and bone implementssuch as arrowheads and chopping tools that were found in different regions of Kazakhstan, particularly at sites located near springs and rivers.

The Bronze Age is a period characterized by the use of copper and its alloy bronze as the chief hard materials in the manufacture of many implements and weapons. In the Bronze Age, the territory of present-day Kazakhstan was inhabited by tribes of the Andron and Begazy-Dandybayev cultures. They engaged in farming and cattle-rearing and they were proud warriors. The burial mounds of warriors of the period, scattered across the Kazakh steppes, are characterized by their large size. The Andron culture occupied central Kazakhstan from the middle of the second millennium B.C. to the 11th millennium BC and the Begazy-Dandybayev were the dominant culture of southern Kazakhstan from the 10th century BC to the 8th century BC. The museum collection contains artefacts from both cultures.

The Early Iron Age (from the 8th century BC to the 9th century AD).

From the 6th to the 2nd centuries BC, the Saks gradually took over as the dominant culture across Kazakhstan. They were nomads, semi-nomads and farmers and Saks craftsmen were very skilful at producing artefacts made of silver, bronze and gold.

Numerous Saks burial mounds were found in Semirechye, Central, Southern and Eastern Kazakhstan. The museum collection holds artefacts of this period such as water vessels, silver and ceramic bowls and artistic bronze sculptures. The museum also houses a life-size replica of the worldfamous ‘Golden Man’ (4th century BC). Discovered in a kurgan, or burial mound, near Issyk, the Golden Man is a figure of a distinguished Saks warrior dressed in funeral clothes of gold that was reconstructed from fragments found during the excavation of the site. It is made of over 4,000 gold pieces, many finely decorated with animal motifs.

The layout of the Besshatyr burial mound site is on display in the museum. It consists of 31 kurgans of different sizes.

In 1998, archaeologist Zainolla Samashev excavated kurgans near the village of Berel in the Altai region. Some very illuminating discoveries came from these burial mounds. From the quality and workmanship of the artefacts and the number of sacrifi ced horses, archaeologists have concluded that these were the burials of the society’s elite in the late fourth and early third centuries BC. The exhibition features a reproduction of a horse found in one of the Berel kurgans, complete with saddle and harness.

The second hall contains an archaeological map of Kazakhstan and the layouts of the mausoleum of Khoja Akhmed Yassawi, the burial site of Kozy-Korpesh and Bayan Sulu, and Aisha Bibi mausoleum.

The third hall features artefacts from the Middle Ages found at the sites of ancient cities and burial mounds. In this part of the museum you can see photographs, artefacts and other materials from the excavation of Otrar, one of the largest medieval cities in the Southern Kazakhstan.

During the Early Middle Ages, a number of independent states flourished in Kazakhstan, the best known being the Kangar union, the Oghuz Yabgu State, and the Kara-Khanid Kaganate. In the south of Kazakhstan, in the valleys of the Syr Darya, Talas, and Chu Rivers, new cities developed, replacing the agricultural and farming settlements. The oasis of Otrar is situated in the Kusulkum region and is not one single site, but rather it was a series of towns and cities in the vicinity of a large oasis. Excavations of Otrar show that it was an advanced settlement with large and complex buildings. It was densely populated: the houses stood close to each other and formed quarters or blocks. The museum houses several artefacts from the Otrar oasis.

The Archaeology Museum houses many valuable and unique historical and scientifi c materials from excavations of burial grounds, settlements and ancient cities. The museum is a centre for the propagation of archaeological knowledge and the achievements of Kazakh science. The rich collection of unique exhibits in the museum regularly attracts the attention of major exhibition venues around the world and over the years exhibits from the museum collection have been shown in more than 20 countries.

In the United States, the “Nomads and Networks: The Ancient Art and Culture of Kazakhstan” exhibition was hosted by the Freer and Sackler Galleries of the Smithsonian Institute in Washington; the exhibition “Of Gold and Grass. Nomads of Kazakhstan” was presented in The Houston Museum of Natural Science and the Mingei International Museum in San Diego.

In Denmark, “Along the Silk Road” the exhibition was shown in the Mosgard Museum in the town of Aarhus.

In Australia, the exhibition, “Bright Flowers: textiles and ceramics of Central Asia,” took place in the Powerhouse Museum in Sydney.

In Germany, the exhibition, “Under the Sign of the Golden Griffi n. The Royal Tombs of the Scythians,” was shown in the Martin-Gropius-Bau in Berlin.

In Italy, the exhibition, “Altyn adam = l’uomo d’oro”, was held in the National Archaeological Museum in Naples.

In France, the exhibition, “Le Kazakhstan,” took place in the Hotel de Vogue in Dijon. Materials and exhibits from the Archaeology Museum were also presented as part of the Day of Culture of Kazakhstan in the cities of Tokyo, Istanbul, and Taegu. 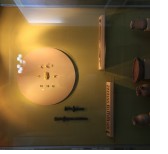 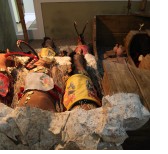 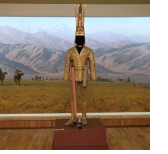 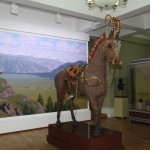 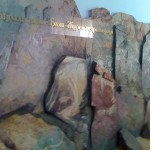 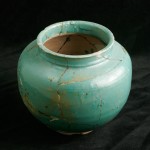 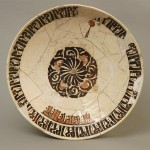 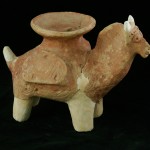 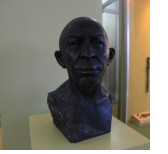 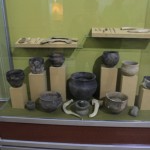 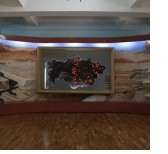 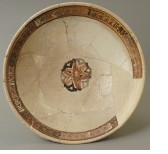