Ancient art on the rocks of Kazakhstan

Traditionally petroglyphs are all images on stone from ancient times (Paleolithic) until the middle Ages, except those in which there is fairly well-developed system of signs. There is no absolutely unambiguous definition. Petroglyphs can be called as primitive cave hewn rock drawings, as well as especially installed stones, megaliths or «wild» rocks. 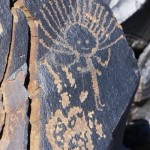 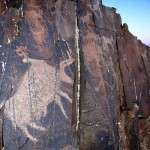 Such monuments do not accumulated in one place, but widely spread on the street of our planet. They were found in (Tamgaly) Kazakhstan, Karelia, Spain (Altamira cave), France (cave Front de Gaume, Montespan, etc.), Siberia, The Don (Kostenko), Italy, England, Germany, Algeria, where recently discovered and created a sensation worldwide giant multicolored mural of a mountain plateau Tassili Ager in the Sahara, among the sands of desert.

In general, it is the image of animals like deer, bison, wild boars and wild horses. Among them there are those who does not exist — woolly mammoths, saber-toothed tigers. Only occasionally the outlines of human figures and animals, rather ritual masks come across. Later in Neolithic period, the scene from the life of a primitive tribe — hunting, battles, dancing and some obscure rites began to be portrayed. Such compositions are dated about 6th -4th millennium BC. The earliest images, dominated by «portraits» of animals belong to the Upper Paleolithic, i.e. they were created 40–20 years ago.

At the end of the 20th century, domestic petroglyphs study gains new momentum in the study of rock image and entering a qualitatively new level. This is due to the fact that the territory of modern young independent Kazakhstan since ancient times people tried to leave at least some message about them or posterity. Most of the monuments of rock art (petroglyphs), which belong to the Bronze and Iron Age have been discovered and published.

Thanks to the absence of anthropogenic impact on most of the territory of Kazakhstan, numerous monuments, which are studied by specialists, have been preserved. Petroglyphs of Kazakhstan are the magnificent monuments of the primitive and medieval art. Specificity of Kazakhstan relief, features of types of stone, making up mountains, caused widespread of petroglyphs.

On the territory of Kazakhstan there is famous to the world archeological complex Tanbaly. In 2004 it entered to the list of World Cultural Heritage of UNESKO. Tamgaly — the monument which is located in 170 km to north-west from Almaty, in Anyrakay, where there are cave paintings, which indeed considered as one of the sacred place for the petoglyphs of Kazakhstan. Here you can find about 5,000 petroglyps, which are fraught with interesting mysteries of the past.
The composition of Tanbaly petroglyps is unique and there is no analogue to it in the world. The complex is located near the village of Karabastau of Zhambyl district of Almaty region. In 2003, the National Museum in the open air was opened on that place.

Among archaeologists Anna Maksimova was the first who began to study Tanbaly since 1957. According to her belief the time of early petroglyphs is Bronze Age, the archaeologist wrote about it in the national scientific journal «Journal of Science» in 1958. Later Tanbaly was investigated by Almaty archeologists Z.Samashev, A.Maryashev, A.Rogozhinsky and others. Archaeologist Alex Rogozhinskiy set the application of petroglyphs on the results of research he came to the conclusion that the time of writing petroglyphs covers several time intervals, from the Bronze Age to the 13th -14th centuries AD.

In Tanbaly in 4th group there is such called 118 flatness, which the length is 6 meters, height is 4 meters. In the flatness were drawn many different drawings: six-headed creations with the man’s body.

Under these painting there are images of 12 dancing people. According to the legend Ogyz divided the territory into 12 regions, therefore, in Tanbaly shown the dance of 12 men, perhaps, representing these regions.

One of the most important in Tanbaly petroglyphs in the 1960s during transportation to the museum of Almaty was broken. Its height was three meters. Preservation of archival photo in this picture. The legend «Ogyz-name» there is a description of Ogyz Khagan: «His feet were like bull’s feet, torso same as bear’s and the whole body is covered with hair». If we compare this description with the lost petroglyph, the resemblance to the description of the exterior Ogyz Khagan will be 100%, and therefore we can assume that on the petroglyph is shown the Ogyz Khagan.

According to the history, Ogyz Khagan’s mother’s name was Ai Khagan. In Tanbaly petroglyphs there is an image of Ai Khagan, this petroglyph was found and restored by archaeologist A. Rogozhin. In Tanbaly there is only one image of a woman in full length, and the image of women in childbirth are in two places, respectively, according to legend, a woman — it’s the mother of Ogyza Ai Khagan and two women are two wives of Khagan.

It is generally known that the runic alphabets are related to the ancestors of the Kazakh people, evidenced by the Orkhon monuments. In Tanbaly have runic inscriptions, the inscription of the five letters in the fourth group. If you read 13 embodiments of the runic alphabet, which was approved by the scientists of the world, we get the word «nerel» or «naret». It can be assumed that this treatment of Ogyz Khagan to their descendants and the people, because the words are imprinted on the right side of the rock image of Ogyz Khagan’s sons are in flatness that have shaped the book’s pages. Consequently, this is a mandate, the meaning of words to be compared with the words Ogyz Hagan. Here the word «naret» means «abundance», and in the poem is written a broad understanding of this concept, therefore, on the rock paintings he wanted to wish to his people to abundance.

Tamgali is one of the most exciting open-air museums in the country. On the territory Tamgali monuments from the Bronze Age and the Middle Ages were recorded. Petroglyphests believe that this place had a sacred significance for the ancient population. Apart from petroglyphs here we can see the places of worship and cemeteries. The monument has been discovered and studied in 1977 by an archaeological expedition of the Academy of Sciences of the Kazakh SSR under the direction of Anna Maximova.

On a dark surface of rocks are seen as zoomorphic images of deer, oxen, horses, rams as well as other animals and anthropomorphic images. Interesting images depicted on the rocks images of riders, dancing figures men, apparently performing some ritual dance.

Sun-anthropomorphic creatures occupy a special place in the complex Tamgaly petroglyphs. Unfortunately, the rock on which the sun-shows, today is suffering from serious destruction.
In general, on the territory of Kazakhstan the cave art is very diverse and rich. The most well known centers of fine rock art are in Zhetysu. The history of study and research of these monuments began more than ten years, but we know about them just a little.

Today in Zhetysu were opened more than 50 monuments, where located petroglyphs. What is more, along with the major discoveries there are several thousand small petroglyphs in various canyons. These petroglyphs belong to different times most of them can be attributed to the Bronze Age. Performed in animal style drawings are principally separately from others, more ancient images.
The first information about the petroglyphs of Zhetysu were collected by Shokan Ualikhanov. He researched and drew the images from the mountains Chulaktau, images of Buddhist saints in the tract Tamgali — Tas on the Ili River and inscriptions to them.
Further study of Zhetysu petroglyphs is associated with the formation of the Turkestan group of archeology lovers / 1856 /.
At the end of the 19th century Great job was led by N. Pantusov. He opened the petroglyphs in the mountains of Bayan-Zurek, Chulakskih mountains, on the river Kurta, in the Terekty canyon, etc.
In the 30 years of the 20th century the study of Zhetysu expedition was continued under the leadership of the Academy of Sciences of the USSR A.Bershtama. Based on the analysis of style and themes, he developed dating petroglyphs, which is used today.

In 1957, a large concentration of petroglyphs in the tract Tamgali, 174 km from Almaty, was opened.
In the 60s, petroglyphs were found not only by archaeologists, but also by historians, travelers and tourists. Petroglyphs discovered many new P. Marikovsky. Petroglyphs on materials he described the ancient fauna of Kazakhstan. In the 80s expedition KazPI named after Abay found large cluster of petroglyphs in the mountains Eshkiolmes, and continued to study Tamgali. The research was conducted in the mountains Chulak, Junggar Alatau mountains and Chuili mountains.

In the late 80s, Kazakh-French expedition under the UNESCO program has been started. The objective of the expedition is to complete edition body petroglyphs of Kazakhstan.
In the each district of Zhetysu there are peculiar rock art centers — the largest monuments of both the number of petroglyphs and wealth of subjects, and the perfection of style and technique of drawing pictures on the rocks. For Western Zhetysu — this is sanctuary of Tamgali, for Northeastern — Eshkiolmes and Bayan-Zurek. Around these shrines appeared smaller clusters petroglyphs. All these places have a priceless value and are unique values that tell the history of our ancestors.