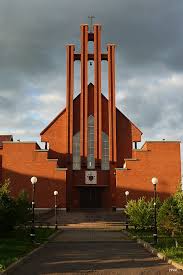 Monks-Franciscans were the first Catholic missionaries in Kazakhstan. Further development of Catholicism in the territory of Kazakhstan was promoted by the settlement of the Polish exiled.

Monks-Franciscans were the first Catholic missionaries in Kazakhstan. Further development of Catholicism in the territory of Kazakhstan was promoted by the settlement of the Polish exiled, the military personnel and specialimmigrants in XVIII – the second half of the XIX centuries. At the end of the XIX century in Kostanay there was a Catholic temple, branch of Omsk arrival. At the beginning of the XX century akmolinsky and Semipalatinsk regions there were communities of the Polish and German Catholic immigrants. In the 1930-1950th to emergence of considerable Catholic settlements gave mass references and deportations of Germans, Poles, Lithuanians, Ukrainians. In the second half of the 50th of the XX century began illegal activity and organized secret church services the Catholic priests released from camps.

Use of materials for publication, commercial use, or distribution requires written or oral permission from the Board of Editors or the author. Hyperlink to Qazaqstan tarihy portal is necessary. All rights reserved by the Law RK “On author’s rights and related rights”. To request authorization email to mail@e-history.kz or call to (7172) 79 82 06 (ext.111)
Қазақша Русский English
MOST READ
Month Year
Burial mounds of the southwestern part of the Semirechye region
Union of the Archives and Library
The referendum on the Constitution is a significant stage of democratization
Heroic mothers of the great steppe
Philosophy of the Emblem
14 monuments at Tekturmas
The rural akims: the country's hope is in the elections
Kazakh historical drama Tomiris premiered in Istanbul
Stolypin about the worries and hopes of immigrants to the Kazakh steppes
ALASH IDEA IS THE PROTECTION OF KAZAKH STATEHOOD
A tireless explorer of the Kazakh land
SWITCHING TO THE LATIN ALPHABET – UNITE ALL KAZAKH PEOPLE
Kunaev Dinmukhamed Akhmedovich
People who eat horses will kill you
Kazakhstan's participation in the Winter Olympics has a long history
Materials on theme
Role of traditional religions in counteraction to extremism and terrorism
Islam in the spiritual culture of Kazakhstan in the early 20th century
Judaism in Kazakhstan
History of pre-Islamic beliefs in Kazakhstan