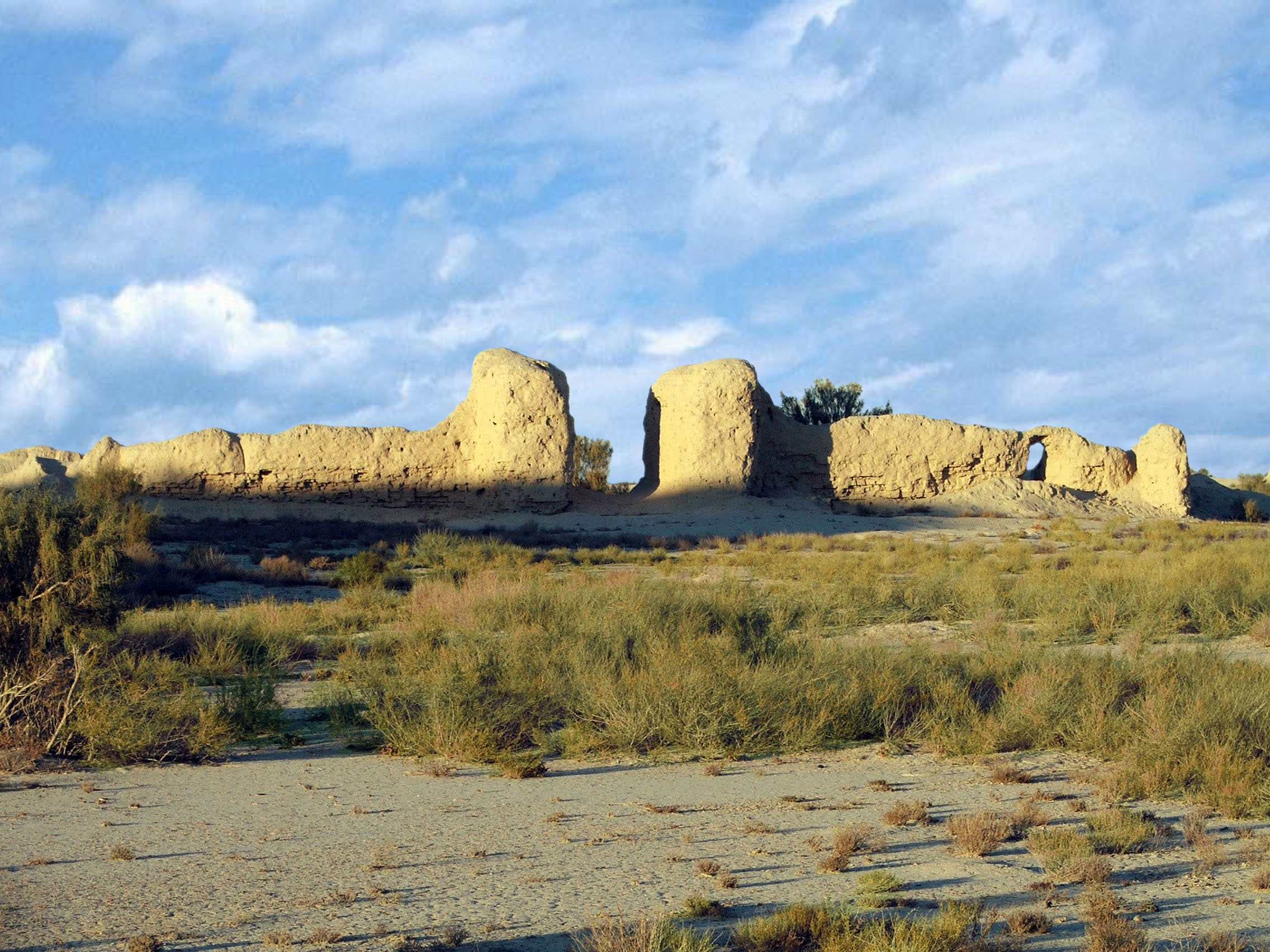 Syrdarya, well known for the works of ancient Greek and Roman historians, travelers and the medieval Arab sources as Yaksart and Seyhun, has been inhabited since the Stone Age. The first mention of the ancient monuments, localized in the area, found in the works of ancient authors. Ancient historian, geographer Strabo in his writings describes Massaget tribes, «who lived in the swampy areas» shores of the Aral Sea, and chroniclers, who described the campaign of Alexander the Great, 4 isolated tribe: apasiak, tohar, augas and sakaravak.

These tribes lived in the 1st millennium BC in dry river valleys of the rivers — Kara, Inkardarya, Zhanadarya, Kuvandarya, Eskidarya and Zhetyasar. Today, around these rivers over 200 monuments, the largest of which are settlements Babishmolla Ciric and Rabat, and mounds Alyp Kabyla, settlements with fortifications Zhetyasar mausoleums Sengirtam and Balanda have been confirmed.

Targeted research of antiquities held in 18th -19th centuries, can be found in the works of I. Gladyshev, D. Muravin, S. Remezov, P. Rychkov, A. Levshin, I. Castane, etc. The first archaeological excavations were carried out in 1867 on the site of Zhankent I. Lerch. Systematic archaeological research in the region began since 1946.

As a result of large-scale reconnaissance works of Khorezm Archaeological and Ethnographic Expedition led by S.Tolstova, in the middle reaches and ancient deltas of Syr-Darya, Zhanadarya and Inkardari found several dozen sites of the Stone Age, burial sites of Bronze Age, settlements and mounds of Early Iron Age, as well as towns and separate estates of the Middle Ages. Among these minor excavations were carried out on the sites of Chirik-Rabat, Balanda, Babishov mullah on cemeteries Uygarak and Tagisken. On materials of studied monuments preliminary periodization and chronology was developed.
Since then passed more than half a century, during which in archaeological science happened significant changes. Improved methodology has been developed and implemented. Also methods of field research, using high-precision instruments were developed. In this regard, at the request of the Institute of Archaeology in the list of unique ancient monuments of Kazakhstan was included research settlement Chiric Rabat.
In 2004, under the State program «Cultural Heritage» was created Chirik-Rabat archaeological expedition led by Zh. Kurmankulova, which continues to explore the settlement and nearby monuments

Settlement Chirik Rabat is located in 300 km southwest of Kyzylorda, 110 km south of the village Zhanakala Karmakchinsky district on the left bank of the ancient tributary of the Syr Darya-Zhanadarya. Settlement occupies the entire area of a natural hill, sizes 850×600 meters. The settlement is strengthened by powerful fortification system. At the bottom of the hill a trench with width in some places — 40 m, depth — 4.5 m from the ditch’s emission was built an outer shaft. Extant height of it now reaches 3 meters and width at the base — 8–10 meters.

It should be pointed out that the mound was settled several times. The oldest part is the northern, higher part of the hill, where there are two large mound and three annular structures with high walls. Also, in this part of the space between the mounds, as revealed in recent years, was filled with rectangular and oval burial structures.

Thus, initially at the highest part of the hill there is a cemetery. Then, simultaneously in the southern sloping part of the hill residential buildings were built.
At this time, powerful new clay-concrete wall, up to 4 meters, width 4.5 meters, on the wall has a rifle gallery width up to 1.8 meters has been built in the outer shaft. This wall was reinforced by rectangular towers and mostly oval shapes, which appeared from the plane wall on 6 meters and reported from inside of the shooting gallery. The fortress wall and tower was cut by sagittal loopholes.
During the exploration around the settlement was revealed a whole system of artificial irrigation network, originating from the mainstream Zhanadarya. Well defined traces main canals and irrigated fields.
Along the canals stretching over 40 km, ranks settlements consisting of 7–8 houses located. Interestingly, in the middle of two or three of these settlements there is a fortified building of Tortkul type, rectangular shape with sides of 60×80 meters and with towers on the corner.

They differ in configuration and a clear height of the walls to 1–1.5 meters. There are three such settlements around Chirik-Rabat. According to the findings that scattered within a radius of 300–500 meters around villages, they lasted quite a long time, among the findings in a lot of the fragments of hand-made and machine pottery typical for Saks period. Often there are stone and glass beads (some of them — painted), fragments of copper products. Animal bones are extremely rare, indicating that the agricultural sector bias villagers.

Findings of Chirik-Rabat’s investigated objects testify about the high social level of the residents of settlement and villages which were headed by the king and the military aristocracy. Society was divided into several hierarchical categories.

According to the enormous mounds, upper level had been occupied by tsarist individuals. The next level was occupied by priest and military aristocracy, one of the burials of which was investigated in 2005. The lower level was occupied by the rest of the society, who settled in numerous villages in the vicinity type of unfortified settlement of Chirik-Rabat. The culture of tribes of the region was developed in close contact with the tribes of the Middle East, the Mediterranean civilization and Egypt. Certainly, further studies open a new page in the history of ancient Turan.

Use of materials for publication, commercial use, or distribution requires written or oral permission from the Board of Editors or the author. Hyperlink to Qazaqstan tarihy portal is necessary. All rights reserved by the Law RK “On author’s rights and related rights”. To request authorization email to mail@e-history.kz or call to (7172) 79 82 06 (ext.111)
Қазақша Русский English
MOST READ
Month Year
Burial mounds of the southwestern part of the Semirechye region
Union of the Archives and Library
The referendum on the Constitution is a significant stage of democratization
Heroic mothers of the great steppe
Philosophy of the Emblem
14 monuments at Tekturmas
The rural akims: the country's hope is in the elections
Kazakh historical drama Tomiris premiered in Istanbul
Stolypin about the worries and hopes of immigrants to the Kazakh steppes
ALASH IDEA IS THE PROTECTION OF KAZAKH STATEHOOD
A tireless explorer of the Kazakh land
SWITCHING TO THE LATIN ALPHABET – UNITE ALL KAZAKH PEOPLE
Kunaev Dinmukhamed Akhmedovich
People who eat horses will kill you
Kazakhstan's participation in the Winter Olympics has a long history
Materials on theme
Landing of foreign archeologists and anthropologists in KazNU
The results of the scientific trips of Kazakhstani historians and archivists to the major international archival centers
Scientific and search expeditions
Expedition of ethnologists in Altay autonomous region Xinjiang in China