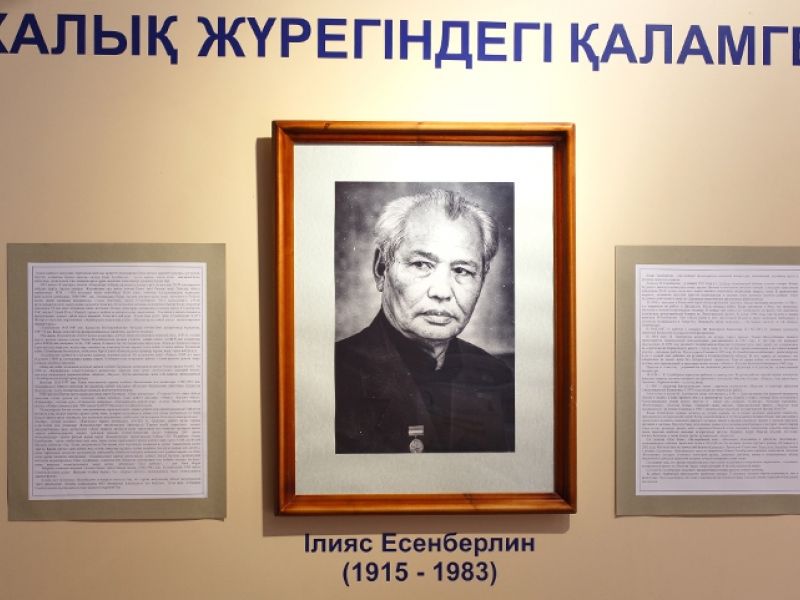 The Central State Museum of the Republic of Kazakhstan hosts the exhibition "Khalyk Zhuregindegi Kalamger" ("The Writer in Hearts of the Nation") dedicated to the 100th anniversary of the prominent Kazakh writer Ilyas Yesenberlin.

Ilyas Yesenberlin is the greatest representative of Kazakh literature. He occupies a rightful place in Kazakh history. The writer was born in 1915 in the city of Atbasar, Akmola region. His childhood and youth took place in a time of notorious events of the 1920-30s when the nation experienced social upheaval, poverty and famine. At the age of nine he became an orphan and was sent to orphanage. It’s known that he graduated from the Worker’s Faculty in Kyzylorda. He then entered the Kazakh Mining Institute and after the graduation went to the front of the Great Patriotic War. Yesenberlin was demobilised in 1943 after a serious injure. Yesenberlin worked for the Central Committee of the Communist Party and Kazakhfilm film studio, he was the Director of the Zhazushy publishing house and Secretary of the Board of the Union of Writers of Kazakhstan.

The poems of Ilyas Yesenberlin were first published in 1945. Later he became engaged in dramaturgy: the play "Borba v Gorakh" ("The Fight in Mountains") was staged in the Republican Theatre for Young Audience. He also wrote several novels. For his novel "Skhvatka" ("The Fight") in 1968 the writer was awarded the State Award of the Kazakh SSR.

Ilyas Yesenberlin still is not only the first but the greatest Kazakh writer who worked on historical subject. From childhood Ilyas knew about heroic deeds of the Kazakhs from village singers and akyns. Gained knowledge and genuine interest in Kazakh history helped him to discover many secrets of the Great Steppe, to develop the chronology of events in several centuries and tell about the most significant historical figures such as Zhanibek, Kerei, Zhanghir, Abylai and many others.

Yesenberlin’s novels "Khan Kene", "Bewithched Sword", and "Despair" were included into the trilogy "The Nomads". The epic work tells about the events in the Kazakh Steppe in the 15th-19th centuries. The third novel "Despair" served the basis for the historical film "The Nomad" produced in 2005. Today people call Ilyas Yesenberlin the "harbinger of the independence" and "singer of freedom". Over the period of his creative work the writer created seventeen novels that became known inside and outside the country. His books were translated into 30 world languages and printed in almost nine million copies.

The exhibition represents personal belongings, awards and books of the writer that were donated to the museum by his spouse in 1938. The exhibition also includes materials about the writer’s life and work, as well as photos and videos from archives of Kazakhstan.

You will find the exhibition on the balcony of the second floor at the Central State Museum of the Republic of Kazakhstan.