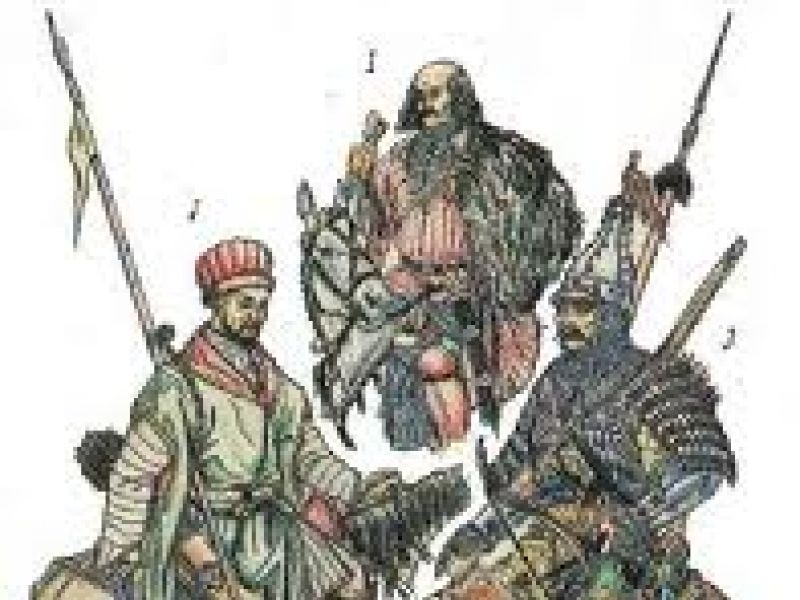 For several centuries B.C., the numerous Turkic tribes, under the general title hun(kun) or Huns, moved to the west and inhabited the land on both sides of the Rivers Yaik and Edil (Volga and Ural). When their leader, Attila died, they were forced to move to the other side of the River Volga, in the Caucasus. In fifth and sixth centuries, the Greek chroniclers Presek and Menander, who lived in Byzantium and Istanbul (Turkey), reported the following (ethnic) names of Huns (Huns): sarogury, onogurs, kotegury, bulgars. One part of bulgars moved on the other side of Danube (protobulgars – Trans.), while another part of the Huns formed the state between the Rivers Volga and Kama - Khazaria 1. The ancestor of khazars-Japhet (Yafs). His branch is Togarmah. Togarma had ten sons: Oyur, Taurys, Auar, Ogyz, Guz, Bezal, Tarna, Khazar, Zanur, Bolgar. In a letter to Yusuf 2, he indicates that they are subordinate to bezhenek (i.e Pincenates). The translator of this letter Professor Harkavy wrote that the Khazar Khanate adopted the Jewish faith (Judaism) and acquired power; it lasted until the ninth century. The guzy-branch Kanli and Kipchaks were identified here. Subsequently, they were called Comans or Cumans. Cumans, along with the Kipchaks and Alshans entered the Jochi Ulus.

When the nomadic part of the Jochi Ulus came from the Urals and Kuban to the Don, they were called by the name of Nogai-Khan, cousin of Bereke-Khan. (The name Nogai-Khan is not mentioned in the "Bloodline" of Abulgazi). I think that Nogai-Khan, in fact, is the son of Shaibani-Khan, the son of Jochi. (Bahadur is the real name). In the 15th century they were subordinated to the Khan of the Crimean Tatars. Northeastern Nogai people that remained on the banks of the Urals, formed an independent khanate and subjugated the neighboring Kazakhs during the leadership of Abul Khair Khan.

After the death of Ulugh Muhammad (Ormanbet-Khan) and the breakup of the Nogai Horde in the beginning of the 17th century, the Nogai people moved to the Volga, where they fell under the power torgaut people, who came there a bit earlier. Another part of them was subordinated to the Crimean Khanate. After this, the Nogai people were assigned with the names of khans and the names of tribes and regions in which they lived. Thus for example, the Nogai from Volga consisted of nine genera – Mansur, Orak, Mamai, Kasai, Ormambet, Togyz, Ideshek, Idesan, Zhanbaylyk, Carashi (descendants of Esek-biy). The tribes of the Karashi branch – Sherin, Baryn, Argyn, Kipchak. The khan Sahib-Gerey combined them with the tribes of Mansur and Sezheut.

In 1883, after the Crimea was annexed to Russia, the Crimean Nogai began to migrate to Turks who were subordinated to Turkey. They increased their number to 500,000.

Astrakhan Tatars and Volzhsk Kondurs call themselves the descendants of Kasbolat and Kasay and natives of the Nogai. Apparently, they are the sons of Nogai-Khan. Their tribes: As, Tobet, Naiman, Zhagalbayly, Mangit, Ergenekty, Kereyt. The Khan of Torgauts Donduk Amba brought these Kondurian Tatars here from Kuban. Today the Kumyks and Karachai live in Caucasus. The scientist Klaprot believes that they are composed on half from the Khazars and half from the Nogai. Among the Stavropol Nogai found a small part of the Turkmen. The Chuvash people live in Kazan, Samara, Simbirsk, Saratov and Orenburg. Arab historians call them bortas. They are the descendants of the union of the tribes of ancient Turks and Cermes. Their language is a bit different from the ancient Turk. The barbinsk Tatars live in the interfluve of Irtysh and Ob Rivers. They are of mixed blood of the Turks and Ugric peoples. Their tribes: Terene, Tari, Baraba, Kolebe, Lunga, Sol, Kargali. Siberian Tatars live in the Tobolsk province. They came here in the 16th and 17th centuries along with the Nogai and Kazakh sultans in order to trade with Bulgars and Sarts. When these lands were ceded to Russian, they stayed there. The tribes of Tatar (Nogai): Torali, Ayala, Kordek, Sargat; Tobolsk - Kordek, Estek, Togyz, Shualshyk, Yaskalbe. Most of them - our Ozbek-Sarts.

1 Khazar Khanate, the first feudal state that was created in Eastern Europe. Khazaria existed for about 300 years, from the second half of the 7th century until the mid-10. S.A. Pletnev. Khazars. M., 1976, p. 3.

2 This refers to the letter of the king (Khazars) Joseph, a copy of which was first published by the orientalist A.J. Harkavy in 1874 See: Kokovtsev P.K. Jewish-Khazar correspondence in the tenth century. L., 1932.

From the book of Shakarim Kudayberdy-uly "Genealogy of Turks, Kyrgyz, Kazakhs and their Khan dynasties". Translation by B. Kairbekov. - Alma-Ata, Dastan JV, 1990