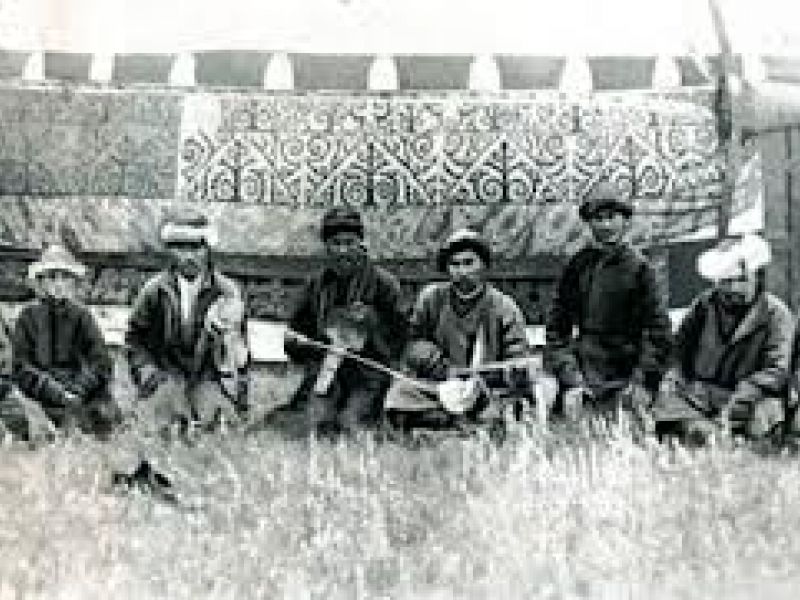 The artistic culture of pre-revolutionary Kazakhstan incorporated both the innovations created by colonial exploitation and the traditional characteristics of patriarchal-feudal society. Literature and music were the most expressive components. Religious dogmas and bans strongly detained development of the fine arts and theatrical culture.

A. Kunanbayev is a founder of the Kazakh written literature. He was born (1845 — 1904) in Chingis mountains of Semipalatinsk region in a family of the foreman of Tobykty clan. He received the initial education at home from the hired mullah. Then Abay was sent to madrasah of the Semipalatinsk imam Akhmet-Riza. However, the father returned Abay to the aul (village) and gradually started preparing him for judicial and future administrative activity of the head of family. Abay comprehended techniques of verbal tournaments the main weapon in which were oratory and quick wit. Judicial proceedings were conducted on the basis of existed during many centuries common law of the Kazakhs. Twenty years Abay studied national poetic works, eastern poets and Russian classical literature. In 1886 when he was 40 years Abay wrote his poem "Summer"; and the next twenty years of life passed in poetic activity.

Abay was the carrier of all new, progressive in the Kazakh society. In his opinion, each intellectual had to develop considerate attitude to environment. He wanted human society to be good, reasonable and progressively developing. Each person had to make his contribution. Therefore Abay called all people wishing to be among intellectuals: "Once a day, once a week, or at least once a month try to realize how did you acted during this time, whether your acts corresponded to blessing and reason".

The aspiration to develop the society progressively was one of the main areas Abay’s works. Abay Kunanbayev believed that each person must work for the society to achieve and improve material and spiritual benefits of society.

The colonial policy of Tsarist Government and feudal oppression in the second half of the 19th century resulted in fast impoverishment of people and Kazakh peasantry bankruptcy. More and more Kazakhs became unemployed. Taking care of this part of the poor, Abay called them not to avoid a wage labor, the most progressive form of labor in general.

All Abay’s works are full of intransigence toward idleness. According to him, human character becomes strong only in coping with difficulties. The poet deeply trusted in creative power of people, though he understood that under the modern conditions of public life people had no opportunity to use the results of their work completely.

In his accusatory poems Abay revealed antagonistic contradictions between the majority of workers and dominating minority.

Abay’s democratic views defined his attitude to the activity of chieftain and biys. Though the rights of biys were cut off by the Tsarist Government they had considerable judicial authority, and the Kazakh peasantry often dealt with them. Decisions of biys on many questions reflected the interests of imperial administration.

Using illiteracy of the population biys sought to benefit, or in the words of Abay, generally, "fooled" people.

Expectations of people were close and clear for Abay. He appreciated so much those followers and relatives who were dedicated to people and protected their interests. Grieving over his early died son Abdrakhman, Abay listed his merits (courage, sincerity, nobility and the desire to get knowledge) and noted that he "was the defender of poor people, was the fighter for honor and truth".

Abay believed that to improve the life of workers economic basis of society had to be changed. Progressive development of the Kazakhs he connected with the development of agriculture, craft and trade. These three mechanisms of economic development were of the special interest of Kazakh educator, he believed that people had to pay more attention on them.

Abay didn’t find ways to address the contradiction between governors and interests of people. He also couldn’t find the interdependence of society, law and individuals though believed in a rule of law.

Abay considered bribery and self-interest of judges to be the biggest evil in the way of prosperity and saw the main force, capable to overcome this evil, in science and education.

Analyzing the life of the Kazakh society, Abay came to a conclusion that all the difficulties could be overcome by the common efforts. Despite the fact that each person manages his own live, there is a national destiny. It is impossible to live out of society or to be better than it is.

Abay had accurately developed point of view on relationship with other nations in Russia. In this regard, the basic principle was the principle of respect, friendship and equality.

Recognizing the need of peace and mutual understanding for all people, he was convinced that only in this case the main driving forces of society — science, progressive ideas, culture could be developed in a full measure to achieve national prosperity.

At the beginning of the 20th century S. Seyfullin, I. Zhansugurov, B. Maylin, A. Auezov, who became founders of the Kazakh literature of the Soviet period, published their first works.

In the 19th century the Kazakh press was born. On April 28, 1870 the first issue of the Turkestan Ualayaty newspaper was published. It was in Kazakh and Uzbek languages. Materials about Chokan Valikhanov, rebellion in Mangystau in 1870 and other event were published on its pages.

In 1911 the first Kazakh journal "Aykap" was issued. During four years of its existence 88 issues were published. In 1913 — 1918 the newspaper "Kazakh" was issued. "Aykap" and "Kazakh" told about all aspects of social life. They supported the idea of transition of the Kazakhs to a settled way of life.