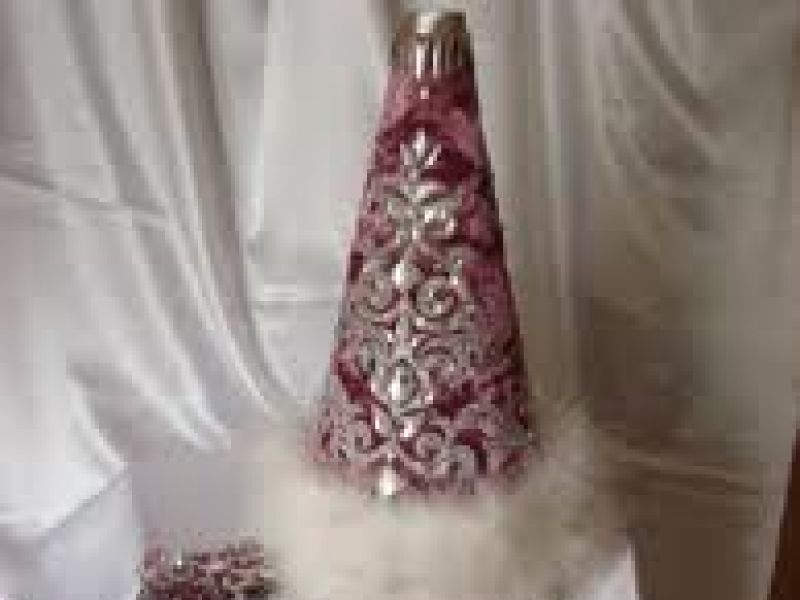 Saukele is one of the ancient headdresses, which existed among Kazakhs until the end of the 19th century. I. Georgi, C.C. Valikhanov, I.I. Ibragimov and others described it. For example, I.I. Ibragimova describes saukele as “the high cone-shaped headdress decorated with silver and gold coins, pearls and corals. The length is about 1.5 feet. The wedding headdress should be worn only during the first time after marriage, for about a year, and then it should be removed and used only on the big holidays, and only for four or five years. In the 19th century, the most expensive saukele cost about thousand rubles, or hundred horses. They had metal fishnet tops and tiara (sometimes made ​​of gold or gems with inserts form strings of pearls, corals, etc.), the temple pendants and chin decorations. The frame of saukele was covered with cloth and sewed with the metal plaques of different configurations, in which the precious and semi-precious stones were inserted. The buckles were large and small. The small ones were fastened between the large ones. The top of saukele was covered with silk or velvet scarves.

The most skilled artisans were taking part in the manufacturing of saukele. In particular, the cutter and the embroiderers, the masters for the production of silk scarves and belts. The patterns on shawls and stripes were embroidered with iris i.e. with the thick twisted colored threads. The center and the edge of shawls was often fobbed with “rope-yarn packing” and sewed nets. The jewelers who applied molding, embossing, stamping, filigree, made the gold, silver and bronze pendants. Usually, the master worked on the saukele for a whole year.

Saukele decorated with precious stones, pearls, corals and gold were incredibly beautiful, with golden tassels, covered with silk from Akmola, Kokchetav and North Kazakhstan regions as well as from Atbasar, they were presented at an exhibition of the Third Congress of Orientalists in St. Petersburg. They were presented by Chings Valikhanov, Meiram Dzhanaydarov and Sandybay Chapanov. The saukele that was owned by S. Chapanov estimated at 600 rubles. It was decorated with 30 coral strings and 15 strings of pearls; it was embroidered with red silk trimmed with a fringe of gold threads. It also had some gems on it. The expensive saukele were also presented at the Nizhnegorodsk exhibition in 1893. The two most valuable of them were from Atbasar steppe.

After a year of marriage, women starts to wear a simple, practical and comfortable headdress - "zhelek." This is simplified saukele, it has a solid framework in the form of a truncated cone, which is sheathed with brocade or enveloped with foil, and it should be decorated with gold and silver plaques with inserted gems. After the birth of children, the young woman goes to the third kind of headdress - "kimeshek." Usually it should be worn in the age between 25-45 years. It sewed from white cloth, often embroidered with satin...

Are Saukele still made anywhere in Kazakhstan or Russia today?