Birthday of Mukhamedzhan Tynyshpayev — the public and political figure, representative of Alash movement, historian and the first Kazakh railway engineer 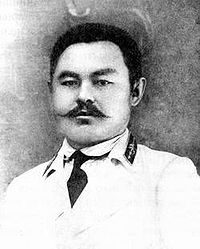 He was born in May 12, 1879 in the foothills Zhilandy of Makanchi-Sadyrovskogo district of Lepsinsk country of Semey region. His father Tynyshpay was from the noble Kazakh family and was the member of the land committee, created by the military governor of Zhetysu the General G. Kolpakovsky. In 1889 he brought his to the city Verny for training. Mukhamedzhan successfully completed a two-year preparatory class and then began to study in Verny gymnasium. For successful study he constantly received certificates for good performance. According to his high school characteristics “…Tynyshpayev with big and constant interest became engaged in Russian history and the history of Russian literature and culture. In particular, he soon proved equally capable to study mathematics ancient languages and Russian literature”. In 1990 M. Tynyshpayev graduated Verny gymnasium and enrolled in the Petersburg State Transportation University named after Alexandre I due to request of the director of Verny gymnasium M.Vakhrushev. In this request was mentioned that “…the student Tynyshpayev in all aspects is a model student with outstanding capabilities, so I consider as part of duty to ask Your Majesty to provide scholarship to Tynyshpayev as without it he would not be able to continue his education at university”.

In St. Petersburg, M. Tynyshpayev lived in Turkestan dorm, which was organized by the order of the Governor-General of Zhetysu. He was paid 420 rubles annually, 60 of which were provided for the purchase of essential clothing, shoes and school supplies. Mukhamedzhan Tynyshpayev had training in the steppes of Kazakhstan, where at that time the railway Orenburg-Tashkent was in construction. In 1906 he participated in the survey expedition of A. Golembiyev on the study of future tracks Turkestan-Siberian Railway. In the same year M. Tynyshpayev passed his school exams, defended the course project on the subject “Construction of the Turkestan-Siberian Railway” and was awarded with engineer certificate with the right to draft and produce all kinds of construction work, also with the right to the rank of a collegiate secretary when joining the civil service.

In February 1907, he was elected to the 2nd State Duma from Zhetysu area. On June 3 of the same year the State Duma was dissolved and Mukhamedzhan returned to Turkestan.

After the February Revolution of 1917, in April was created Turkestan Committee by the Provisional Government in order to solve the issues of governance.

In 1917, he as a delegate from Zhetysu area, I participated in All-Kyrgyz Congress in Orenburg and became one of the delegates to the All-Russian Constituent Assembly. In 1917 he was elected as Prime Minister of Turkestan autonomy, but due to the divergence of views with elected Foreign Minister Mustafa Chokay left his post and went to Tashkent. Chokay, as Prime Minister of Turkestan autonomy in December 1917 participated in All-Kyrgyz Congress in Orenburg, where Alash (Kazakh) autonomy was proclaimed and joined the Government “Alash Orda”, the chairman of which was Alikhan Bokeikhanov.

In 1919, M. Tynyshpayev moved to Turkestan where Soviet power was established. In 1921, he was appointed as the head of the department of water resources of Ministry of Agriculture and Food (from 1946 known as the People’s Commissariat for Agriculture - Narkomzem) of Turkestan in Tashkent. In 1922, Narkomzem appointed M. Tynyshpayev to a similar position in Shymkent. July 22, 1922 he lost his wife Gulbahram, the mother of his three children: Iskander, Fatima and Dina, who died of cholera. ThereafterMukhamedzhanTynyshpayevreturnedtoTashkent.

In 1924 he was invited to Kazakh Pedagogical University, which was opened in Tashkent, to work as teacher of mathematics and physics. During this period he had been collecting information about the origin of zhuzs with description of the history of the Kazakh clans, formed the table of genealogy of tribes with short description of life and death of khans, batyrs, biys and akyns. He also lectured on the subject in the Turkestan department Russian Geographical Society. He published the researches: “ The burial Koksu and mound Kaylak”, “History about tribal composition of the population of Tashkent district”, “Kazakhs in 17th and 18th centuries”, “Victory and defeat of Kazakhs”, “Materials on history of Kygyz-Kazakhs people”. He devoted a lot of time to community service and promotion knowledge.

In 1925, M. Tynyshpayev was offered the position of chief engineer on improvement of the city Perovska (former Ak-Mechet (White-Mosque), renamed in Kyzyl-Orda due to change of the capital of Kazakh SSR from Orenburg. Under his leadership were build houses and administrative buildings of brick, was designed and built channel Sarkyrama to provide water to Kyzyl-Orda.

March1, 1926, M. Tynyshpayev moved to Alma-Ata and started to work as the director of transportation department of Zhetysu province. Under his leadership were built road Alma-Ata — Pishpek (now Bishkek), was conducted the researches on the construction of roads Alma-Ata — Taldykorgan and proposed the new version of road Alma-Ata — Khorgos.

In January 1927, by the proposal of Ryskulov M. Tynyshpayev was included in the Committee on the construction of Turksib, which was created in December 1926. Mukhamedzhan Tynyshpayev actively participated in the preparation of the “staff on maintenance of the road”. By his initiatives were created courses, where 60 young Kazakhs were trained.

He worked on the development of the project (known as Chokparsky version) on laying railway tracks through Chokparsky that saved 25 million and almost a year earlier the construction of Turksib was built. In 1928, he insisted to maintain the Balkhash version of the route opposed to Lepsinsk, so it helped to save about one million rubles in the construction of one hundred thousand rubles a year in railway operation. M. Tynyshpayev worked on the correction of the errors of Alma-Ata station made by the design engineer.

In September 1929, the head of Turksub construction V. Shatov issued a decree about the formation within the production department of Turksib a special service — parts of the way, the head of which was appointed Mukhamedzhan Tynyshpayev.

In those years M. Tynyshpayev married to Aziza Shalymbekova, but their marriage did not last long. ShewithherlittledaughterYenlikmovedtoMoscow.

August 3, 1931, he was arrested because of denunciation, but after long criminal investigation the evidence was not found. His third wife Amina at that time with his little son Daulet went to hiding. He insisted to give his son his wife’s surname Sheikh Ali.  The next arrest M. Tynyshpayev was accused and in April 20, 1932 was given the penalty – 5 years of exile to Voronezh. Being under the supervision of technical department, he worked in the office of construction of a new railway line Moscow- Donetsk.  After his return from exile he went to build a railroad Kandagach-Gur’ev, where he got sick, and then he moved to Tashkent.

In November 21, 1937, M. Tynyshpayev again was arrested as an “enemy of the people” and shot. September 29, 1959, by the decision of the Supreme Court of the Kazakh SSR M.Tynyshpayev was rehabilitated. In February 1970, he was rehabilitated by Prosecutor’s Office of USSR and the Military Prosecutor of the Turkestan Military District.