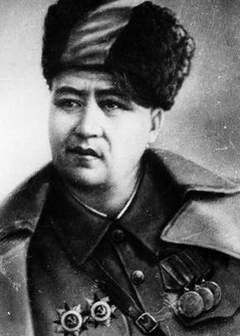 Kasim Kaysenov was born in April 23, 1918 in the village Asubulak Ulan district, East part of Kazakhstan. This place is beautiful with its high mountains, pristine forests and rushing rivers. All that beauties of his native land is inherited by him. His character and work is easily identified by the infinite height and purity of thoughts and indomitable search.

In 1935, at the age 17 he arrived to Ust-Kamenogorsk and started to study in Political Educative College. From 1938 he had worked in the Pavlodar region as an inspector of public education. In 1940-1941, he trained in special military school. After graduation he was sent to the headquarters of the sought-western front.

In 1941, by the instruction of commander he was transferred to the occupied by enemies Ukraine. He was one of the first organizers of the partisan movement in Kiev, Poltava region. K. Kaysenov commanded the troops of Connection named after Chapayev, which made many brave operations on the territory of Moldova, Romania and Czechoslovakia. For military services during the war Kaysenov was awarded with Order of the Patriotic War 1st degree, Order of Bogdan Khmelnitsky and eight medals.

After demobilization K. Kaysenov worked as referent in the apparatus of the Presidium of the Supreme Soviet of the Kazakh SSR, Deputy Chairman and then Chairman of the Executive Committee of the Sverdlovsk district of Dzhambul region. Also he worked as editor at “Kazakh eli”, “Zhazushy” and “Kaynar”.

As a veteran of World War II, K. Kaysenov often was invited to schools, universities, technical schools to share memories of the harsh years of the Great War. The guerrilla leader constantly felt the need to talk about the difficulties of guerrilla’s everyday life, comrades, events that he witnessed.

K. Kaysenov received many priceless documents like copies of orders to conduct combat operations by troops and guerilla sabotage groups, photos and memories of participants of partisan battles. This rich material that called itself “begged” in the book. The memoir, united in one common name “Iz kogted smerti” (“From the clutches of death”) was published in 1960. A year after the book “Malchik v tylu vraga” and “Na Dnepre” (“The boy in the rear of the enemy” and “On the Dnieper”) were released.

The writer many times was in Ukraine after war. He visited many places of ancient battles, met with former guerillas. The result of the trips was a book “Partizanskoi tropoi” (“Partisan path”) (1964).

On the 60th anniversary of the writer Republican youth publishing “Zhalyn” released its collection of stories “Narodnye mstiteli” (“People’s Avengers”) (1978), which included the best works of K. Kaysenov about the partisan movement in Ukraine.

“Nothing should be forgotten”, - says the writer. K. Kaysenov all his books about the war saw them as small monument to those who walked by his heart to fight for the freedom and independence of their country.

“Strana moego detsva” (“The country of my childhood”) was the last book dedicated to Asy-Bulak. “The man’ kindness and beauty origins from fabulous and unique country of childhood. Every faces with pale and bitter, but remembers this country and turns to it…”, - wrote K. Kaysenov. The author talked with soft and sad smile about the mischievous antics of “Tentekkary” that could take away asyks from his friend, arrangement of holiday with baursaks prepared by his mother. He remembered the lessons of dombra, justice, wisdom of grandfather Asybay, favorite among the all children of aul.

K.Kaysenov was the member of Union of Writers in Kazakhstan. He wrote about three dozen books that were translated into Russian, Kyrgyz, Ukrainian and Vietnamese languages. He also wrote about memoir about outstanding people who he met. They are Marshal S. Budyonny, leaders of the guerilla movement S. Kovpak and A. Fedorov. His teammates Sabit Mukanov, Gabit Musrepov, Baurjan Momushuly, Tair Zharokov and Alibek Dzhangildin were also his friends in life.