In 1998 the book "About time, fates and myself" by the President N. Nazarbayev was published in the United Kingdom 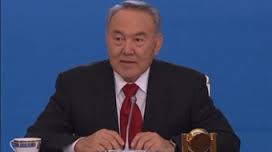 In Astana in the Palace of Peace and Reconciliation the 15th Session of the Assembly of People of Kazakhstan under the chairmanship of the President N. Nazarbayev related to national integrity was held. The agenda was "National unity — our strategic choice".

A distinctive feature of the forum was that the draft of the Doctrine of National Unity of Kazakhstan was submitted to the people for a vote.