Home Calendar In 1743 was found the city Orenburg

In 1743 was found the city Orenburg 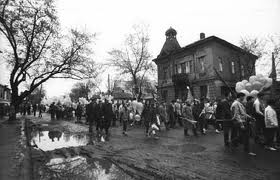 Orenburg was found in April 19, 1743. The first fort was built in August 31, 1735 on the site of the present Orsk, where the name Orenburg came from "fortress on the Or River"

The Empress Anna Ioannovna heard rumors about the riches of the South Urals. She decide to continue the policy of Russian Tsars on the development of the Siberian lands. In 1734, she found

Deciding to continue the policy of Russian Tsars on the development of the Siberian lands, in 1734, she found povelivaet Oph Estuary, which flows into the river Yaik (Ural), a new city and call it Orenburg. In 1734, she commanded to establish a new city on the estuary of the Or River, which flows into the River Yaik (Ural), and call it Orenburg. In 1735, the expedition (later Commission) under the Chief Secretary I.Kirillov was send there. Kirill after establishment of the new fortress he decided that the place for it was chosen very badly. Later from this fortress grew the town Orsk. Therefore, in 1740, the town was moved to a new location to Red Mountain, downstream Yaik. Also the location for Orenburg was inconvenient. While building the fortress it was noticed that the Red Mountain was poor for construction materials. In 1742, Orenburg was laid for the third time. The city was hastily built on the Red Mountain and continued to exist under the name Krasngorsk fortress, then the village Krasnogorsk.