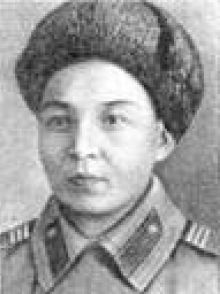 Hero of the Soviet Union

Manshuk "Mansiya" Zhiengalieva Mametova or Mänşük Jïenğaliqizi Mämetova  (23 October 1922 - 15 October 1943) was a Soviet Kazakh machine gunner of the 21st Rifle Division of the 3rd Guard Shock Army and the first Soviet Asian woman to receive the Hero of the Soviet Union medal for acts of bravery.

Orphaned at very young age, Manshuk Mametova spent her childhood in Almaty, under care of A. Mametova. At the time the Second World War began, she was studying at Almaty Medical Institute.

She had been taken to war as a volunteer in 1942. As a machine gunner, she showed bravery and courage. She was killed in a battle for Nevel.

Many streets and schools in Almaty, Nevel, Oral and other cities were named after her, and monuments in her honour may be found in many parts of former Soviet Union.