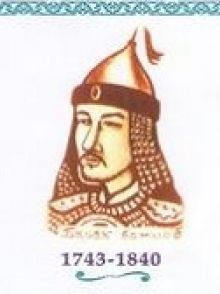 Barack Satybaldyuly (1743-1840) was the famous warrior, hereditary bii and governor of tribe, organisor of liberation fight against colonial politics of Russian empire.

He was born in west part of Kazakhstan, and was descendant of Tabyn tribe. In youth participated in many campaign against the Volga Kalmyks. In 1761, he killed the famous Kalmyk warlord Alakybek. In 1873-1797, together with Syrym Datuly and Tilenshi Bukenbaylu participated in anti-colonial rebellion and led squad. Barack Satybaldyuly was one of the most respected and influential figures in Western Kazakhstan. During his long life participated in almost all social and political affairs of the region. During his life he was added to the saints. In Russian archives was kept a lot of historical materials about him. He was buried in current in the place Sam-Turysh of Beineu district of Mangystau region.

Barack became well known from eighteen years, when he defeated in a duel with Torgut Batyr Alakobikom. In the seventies, the 18th century, Barack warrior leading the squad Shomishty -Tabin, participated in the battles on the banks of the Kalmyks and Edila Zhaiyk. In the years 1785-1792 was one of the leaders of the movement Syrym Datov.

Associate Syrym batyra Barack Satybaldyuly with three thousand troops led ozhestachennye fighting near Orenburg fortress with squads of the tsarist government. The perseverance and strength of troops of Barak batyr wrote in a letter to Baron O.Igelstrom imperatitse Catherine II.

Batyrs Barak and Asau buried 15 kilometers southeast of the village Turishev. In 1993, a mausoleum built in honor of Barack Satybaldyuly.

From 20 to 22 September 2013, in the heart of Beineu district Mangistau region held a memorial wake (250 years and 270 years) in honor of the brave "Asau and Barack." Descendants of warriors, members of the public fund "Asau ata", entrepreneurs and ordinary citizens who have expressed interest in this important cause, to render all the necessary support and spoke about the readiness to welcome guests not only from all over the country and neighboring states.