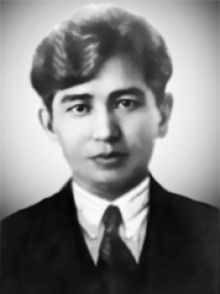 One of the organizers of the first Kazakh Academy - Kazakh branch of the Academy of Sciences of the USSR, whose life has kept within a short period from 1899 to 1938, is one of the founders of Kazakh linguistics and, in general, the Kazakh professional science. Trudy K. Zhubanov on linguistics devoted to the Kazakh alphabet and spelling issues. The founder of Kazakh linguistics, but also a scientist, who left behind many works on literary criticism, art and pedagogy. His seminal work "Kөmekshі etіstіkter changed kүrdelі etіstіkter", "Kazakh tіlіndegі bіrіkken sөzderdің zhasaluy", "Phonetics", "Zhana grammatikanyң zhaңalyқtary zhayynan" and others - a worthy contribution to the theory of Kazakh linguistics. He actively participated in the creation of the Kazakh spelling, based on the Latin alphabet. Developed the theory of the Kazakh language, wrote major research works on the Kazakh language.

KK Zhubanov belongs to the constellation figures of Kazakh culture, such as Saken Seyfullin, Ahmet Baitursynov, Sanjar Asfendiyarov, Ilyas Dzhansugurov, Myleene B., et al Mukhtar Auezov Heritage KK Zhubanov covers a wide range of theoretical and practical problems, many of which even today are facing the Kazakh science. He wrote the first textbooks of Kazakh grammar schools and high schools, a monograph on the Kazakh linguistics, one of the best, according to the Soviet-turkologist academician SEMalov, for its time, the Kazakh projects Latinized alphabet, as well as many practical developments on the Kazakh linguistics and development of the Kazakh culture. And now all his work is widely used by scientists, teachers, higher education institutions and secondary schools. This is a scientist - lexicographer