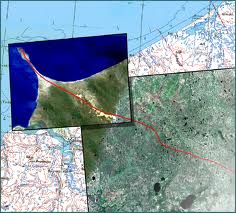 By now as a result of longstanding explorations a huge amount of evidential material on archeological monuments on the territory of the Republic of Kazakhstan is accumulated by the science.

Works on discovery of the monuments of historic and cultural significance are still in process, and yearly a score of different objects are found and described in the result of explorations.

By now there is a necessity to create the unified statistic electronic database that would unify the main information on location, researches that were made, chronology and inhering of archaeological objects.  The most convenient and accessible tool for today is geo information system (hereafter referred to as GIS), which is the complex of programs that allows to map out, systematize and analyze the data. Lately geo information system is used in different spheres (scientific and administrational) as a tool to systematize data on land funds, water resources and etc. Creation of GIS database of archaeological monuments integrated with existing nowadays databases of land funds of the Republic of Kazakhstan will give the opportunity to consolidate information into the unified register and analytical system that allows working with this system to accredited government and scientific institutions. The universal GIS map of archaeological monuments is essential either for governmental control bodies of the monuments of historical and cultural significance, bodies of control and distribution of land funds of the Republic of Kazakhstan, scientific and research establishments, or for individual researchers to analyze historic situation.

The proposed project objectives are:

-  To transfer accumulated information to a new modern level of analyzing and systematization of data using computer technologies;

- To create unified electronic database of archaeological and historical monuments;

- Opportunity of addition and further development of created project;

- Opportunity to use the accumulated information by the bodies of government control and regulation;

- To integrate with existing databases of land funds, water resources and other structures;

- To create the unified tool for informational and analytical processing for the scientists;

- To create the main digital project ready for further development and update.

- Digital processing of the whole complex of accumulated data of archaeological monuments of Kazakhstan on the basis of corpuses and registers by the republic and regions issued earlier;

- creation of the table of monuments by each region of the Republic of Kazakhstan pointing on GPS coordinates of the monument, chronological and cultural inhering, research history, main characteristics, etc.;

- Collection of archival and bibliographic information on archaeological monuments of Kazakhstan;

- Consolidation of received data into the unified GIS map;

- Organization of a project available for use and implementation in scientific and government institutions;

- Preparation of specialists of the ready projects.

The actuality of the proposed project is in development of database unifying the accumulated information, which allows the statistic accounting, scientific analyses and monitoring of modern state of archaeological monuments.  This gives massive opportunities to use the system either by scientists or by the government bodies of protection of historic and cultural heritage.

The complex of computer programs used in mentioned aims takes the accounting and classification of the general archaeological map and list of regions (performed on paper issues before) to a new modern level.

Existence of electronic database gives opportunity to correct, update and further development of project. Electronic database of archaeological monuments can be developed according to current requirements of the science, for today it is necessary to start to organize the general database, which will be basis for the further additions and development.

It is necessary to mention a very limited amount of the specialists in archaeology able to work with geo information programs, and this breaks development of archaeological science in digital and electronic space.  Project performance will allow to involve young specialists from different regional centers to undertake an internship and to complete trainings. Trained archaeologists can be involved whether to work in scientific space or to work in local bodies of government to monitor the situation.

The level of development of organization of GIS databases of archaeological objects of Kazakhstan is on initial stage now; the equal projects took place only in concern of separate barrows and assemblage of monuments (Borizharskii barrow, Otyrar oasis) in southern regions of the republic in general. Huge selection of archaeological objects mostly are not mapped out  in case of corpuses issue it is  not clarified the exact location of the object, its classification, dating and the territory of protective zone.

To realize the program foreign archaeologists from Italy and Russia, specialists in GIS technology, were invited as advisers; also it is planned to involve Kazakhstani scientists studying abroad and scholars of “Bolashak” program.

GIS programs as a tool of systematization and analyses of historic data are used in foreign countries for more than 20 years.

Research Methodology supposes a number of the main actions such as:

2) Creation of cartographical base;

3) Collection of missing information about the main monuments;

As a main method it is planned to use statistical method of data analyzing.

The proposed methodology of work is the most optimal for creation of electronic database, where the most important is digitizing of accumulated information published in analog form only, and data registration in form of tables and data consolidation into general mapped out project.

Creation of the unified GIS database of archaeological monuments of Kazakhstan will give an opportunity:

- To combine and systematize an incomplete information into unified registry and analytical system;

-  Integration of the project with unified government register of the land use will allow to clarify and specify location of the monuments of historic and cultural significance and of the territory of protective zones which is important first of all for governmental control and regulation bodies;

- Use of GIS as a basis for organization of corpuses of archaeological monuments of the Republic of Kazakhstan;

- Opportunity for archaeologists and historians to work with ready projects, where they can build reconstruction models and analyze historic situation;

- Education and training of GIS specialists for regional centers and government bodies.

Bibliographies (including the most quoted articles of international scientific magazines, books and other sources, excluding publication of potential performer).

Use of materials for publication, commercial use, or distribution requires written or oral permission from the Board of Editors or the author. Hyperlink to Qazaqstan tarihy portal is necessary. All rights reserved by the Law RK “On author’s rights and related rights”. To request authorization email to mail@e-history.kz or call to (7172) 79 82 06 (ext.111)
Қазақша Русский English
MOST READ
Month Year
Recorded history of Kazakhstan. Part 2
Heroic mothers of the great steppe
How had the World War II been started?
Philosophy of the Emblem
14 monuments at Tekturmas
The rural akims: the country's hope is in the elections
Kazakh historical drama Tomiris premiered in Istanbul
Stolypin about the worries and hopes of immigrants to the Kazakh steppes
ALASH IDEA IS THE PROTECTION OF KAZAKH STATEHOOD
A tireless explorer of the Kazakh land
SWITCHING TO THE LATIN ALPHABET – UNITE ALL KAZAKH PEOPLE
Kunaev Dinmukhamed Akhmedovich
People who eat horses will kill you
Materials on theme
2
Kazakh archeology: history of investigation and today’s development
Circle of young naturalists
History and culture