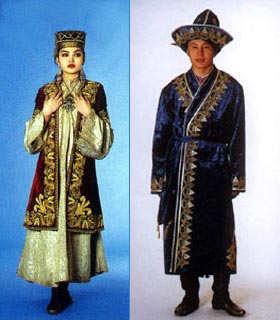 The Kazakhs valued the skins of koulans, saigas and tigers, as well as the dark fur of raccoon, muskrat, sable, marten, and white fur of stoats and ferrets.

The Kazakhs valued the skins of koulans, saigas and tigers, as well as the dark fur of raccoon, muskrat, sable, marten, and white fur of stoats and ferrets. The fur of marten and sable appreciated more than the fur of other fur-bearing animals. Their skins could be used to sew the fur coats. The common name of the fur coats among Kazakhs is “ton”. The fur coats from the fur of animals called “ishik”. Janat ishik is a raccoon fur coat, “kara tulki” is a fur coat made from the fur of the silver fox, “kyzyl altai tulkisi” is a fur coat made from the fur of the Alatai red fox.The Fur coat, covered with sealskin, was one of the most expensive items in the bride's dowry, it was called «bas ton». Kazakhs knew the technique of making the coats from swan's down, the down of loons and herons. The coat from the fur of loon in 1878 was exhibited at the Kazakh Crafts exhibiton in Akmolinsk. Another fur coat was made in the village near the Kurgaldzhino Lake; it was sewn from the same dark, blue and gray quadrangles that are bordered by narrow black stripes. For good embossing of the skin of loons, you must have a special ability. The sacred significance was attached to the caftans or jackets made from the swan's down, which were traditionally worn by baks. The Fur coats were covered with cloth, silk or brocade. They were differed by the name of the cloth or by its color. Only nobles wore a fur coat that was made from blue cloth and covered and trimmed with the beaver skin – “kok ton”. The coat made from the fur of the premature foals was quite wide and slightly elongated. Some coats were made from the goatskin. The longest hair was removed, leaving the undercoat.

Such coats were called “kylka zhargak”. The Kazakhs used the goat skin to curry the chamois and to sew the robes, cloaks and light pants. P.S Pallas noted the fact that the Kazakh clothing was primarily “made from curried goat wool, and therefore was soft and did not spoil during the rain”. “The goat skin was perfect for the outerwear” – wrote I.P Falk. A.I Levshin also wrote that such robes were quite comfortable during the rain and well protected from the winds. The robes from goat skin were also called zhargak. Thirty vintage, suede, embroidered silk robes from different areas of Central and Northern Kazakhstan were shown at an exhibition in St. Petersburg Congress of Orientalists.Suede robes were also presented at the exhibition in Akmolinsk ...

From the article: "A Study of History of folk costume".

Photo: www.centrasia.ru
Use of materials for publication, commercial use, or distribution requires written or oral permission from the Board of Editors or the author. Hyperlink to Qazaqstan tarihy portal is necessary. All rights reserved by the Law RK “On author’s rights and related rights”. To request authorization email to mail@e-history.kz or call to (7172) 79 82 06 (ext.111)
Қазақша Русский English
MOST READ
Month Year
Stolypin about the worries and hopes of immigrants to the Kazakh steppes Kazakh historical drama Tomiris premiered in Istanbul
Karaganda coal and the merchant Ushakov The great son of the great steppe Kazakh dissidents: Amangali Kenzheakhmetuly, known as the “Gang” Kassym-Jomart Tokayev sent a telegram to UN Secretary General António Guterres History of pandemic in Central Asia Living for the Kyrgyz account The excavation works in the town of Syganak A death of Ulugbek Heroic mothers of the great steppe How had the World War II been started? 14 monuments at Tekturmas The rural akims: the country's hope is in the elections