Home Publications “Traditional life in the steppe”: trade and craft of Kazakh people

“Traditional life in the steppe”: trade and craft of Kazakh people 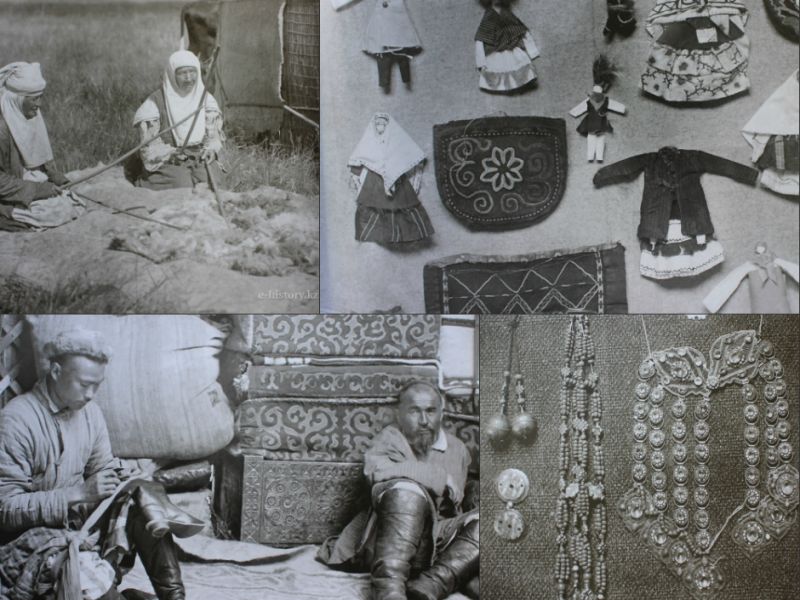 Handicrafts and all kinds of homemade crafts were an inherent part of daily routine of the inhabitants of the Kazakh steppe.

The harsh conditions of nomadic life has left its mark on this area of traditional culture, making domestic production a subsistence production, directed to meet the needs and requirements of members of the family and rarely to the exchange or trade. Joining of Kazakhstan to Russia and rapid development of capitalism led to penetration of the commodity-money relations and beginning of separation of the craft from the subsistence production into Central Asian steppes. However, the production of traditional crafts continued to respond to requests of nomadic and semi-nomadic cattle-herding. There was clear separation of craft production into male and female in the Kazakh society. Male craft production included such trades as blacksmithing, jewelry, joinery, leather industry, bone-carving and stone-carving, while the prerogative of women were wool processing, weaving, embroidery, netting and et cetera. 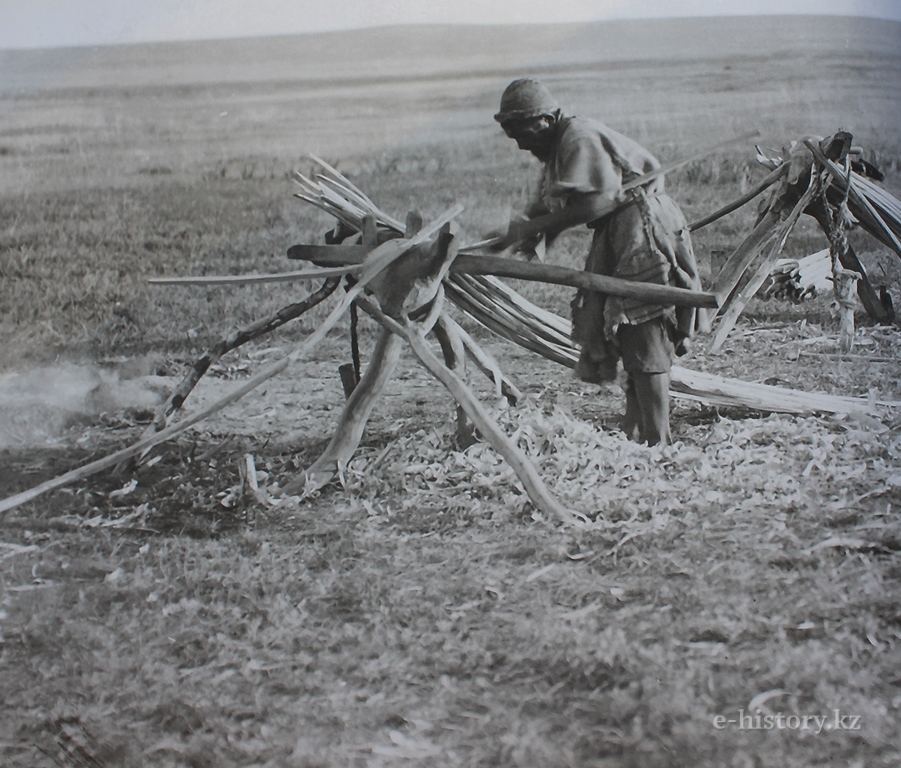 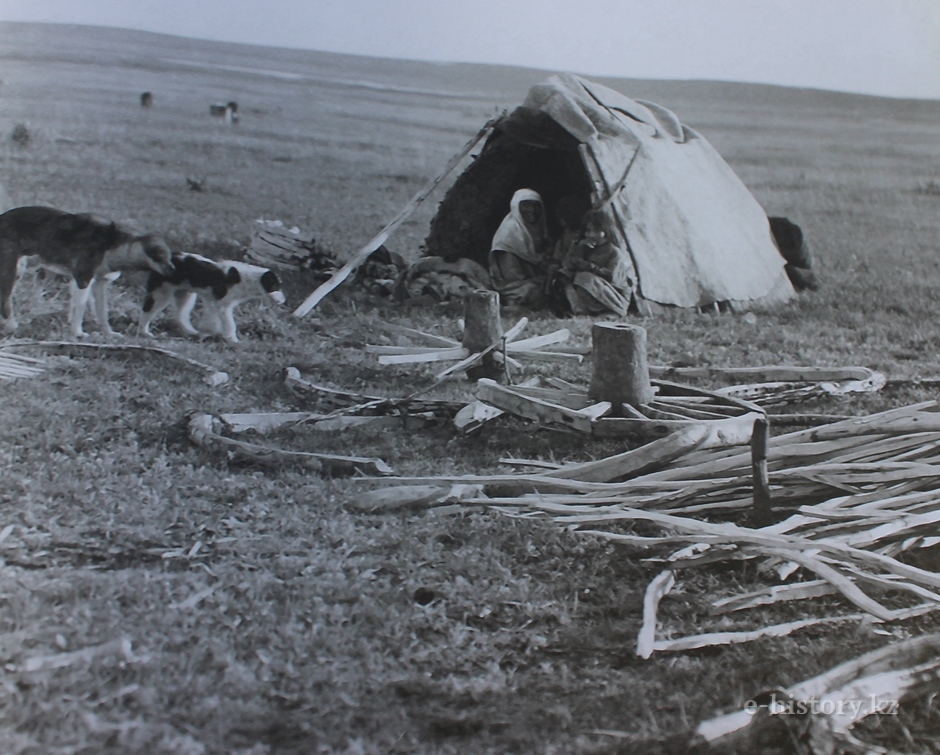 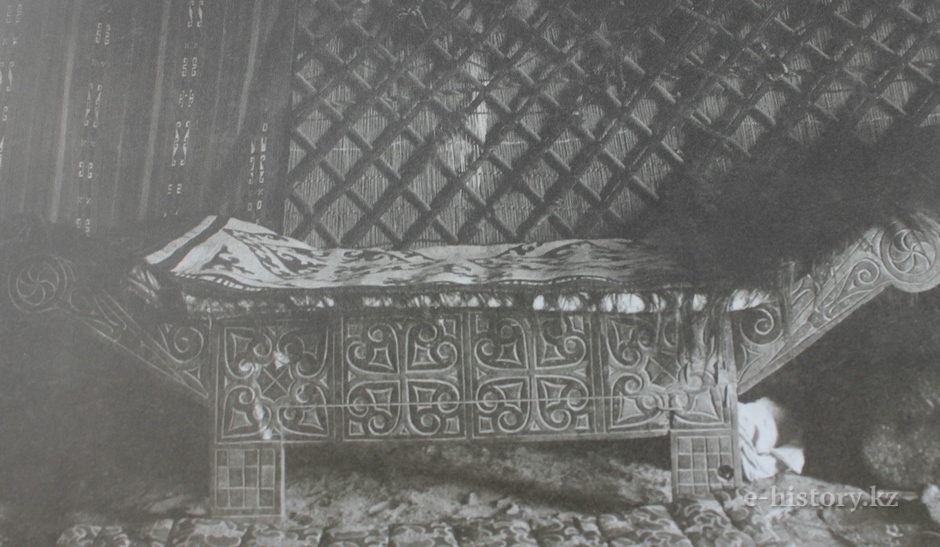 Woodworking craft gave the population a variety of items, necessary for farm management and everyday life. Valuable products manufactured by wood craftsmen were numerous elements of the yurt’s frame. Manufacturing of the sliding sections of the nomadic dwelling (kerege), dome ruddles (uyk), rim of the cap (shanyrak), doors (esik) required considerable skills. Manufacturing of the wooden parts of the yurt was common in the northern regions of Kazakhstan, rich in woods, in particular in Kokchetau district. Some wooden elements, primarily doors and circular top were covered with carved ornament. The items of the wooden furniture: chest (kebezhe), lockers (asadal) for food and dish storage, hangers for clothes (adalbakan), bed (tos agash), various wooden dishware and other household items. The need in tools made of wood for land cultivation and threshing the crop has increased with the development of agriculture. Manufacture of the saddles was important part in the craft of the carpenters.

The needs of the nomadic economy met the requirements of blacksmithing (ustalyk), based on the imported raw material and supplying various elements of horse harness, stirrups and horseshoes. Metal parts of arable guns, sickles, knives and et cetera also were manufactured. The volume and value of the traditional blacksmith craft decreased according to the massive influx of cheaper goods of tailor-made to the domestic market. 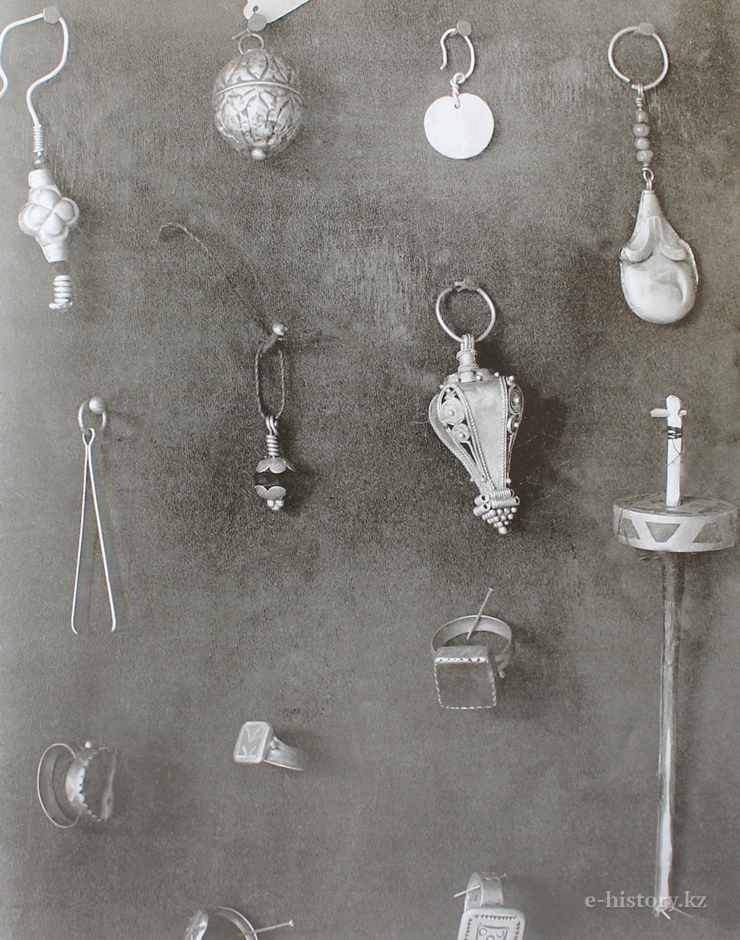 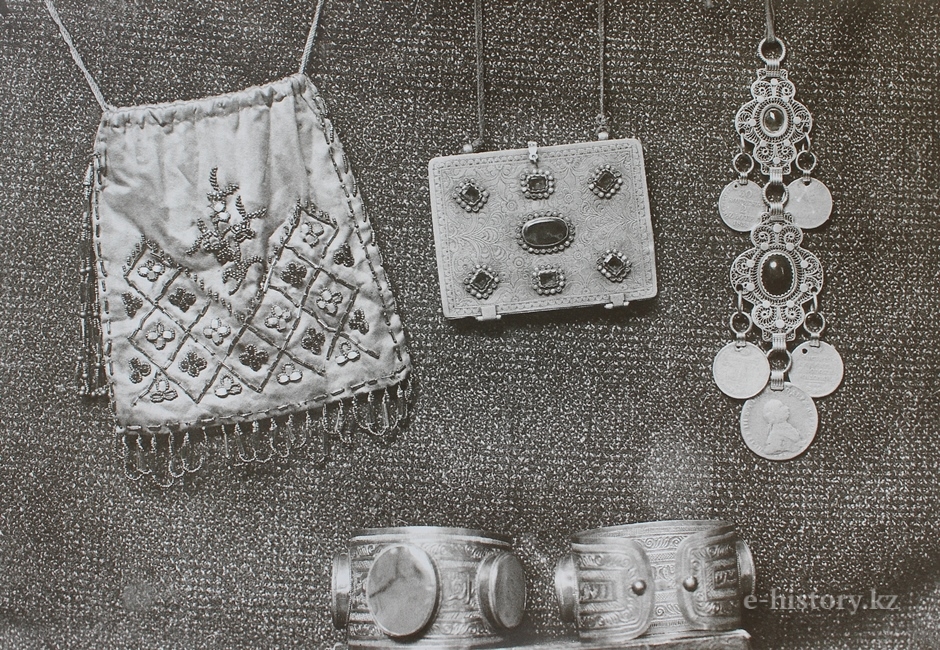 Jewelry business was highly developed (zergerlik). Although local jewelers mastered the technique of gold sputtering, silver was the main material for them. There were many techniques of metal processing: casting, hammering, pressing, coinage, damascening and et cetera. The imported silver and Russian silver coins were used for manufacture of the jewelry. The bracelets, rings, signet rings, pendants and earrings were popular among the women’s jewelry. Kazakhs’ clothes also were decorated by the jewelry items.

The bone-carving (suiek ondeu) was close to jewelry. The crafted bone plates (horns of ungulate animals were often used) were used for the encrustation of the various pieces of the furniture. The bone and the horns were used for handles of daggers, knives and whips. 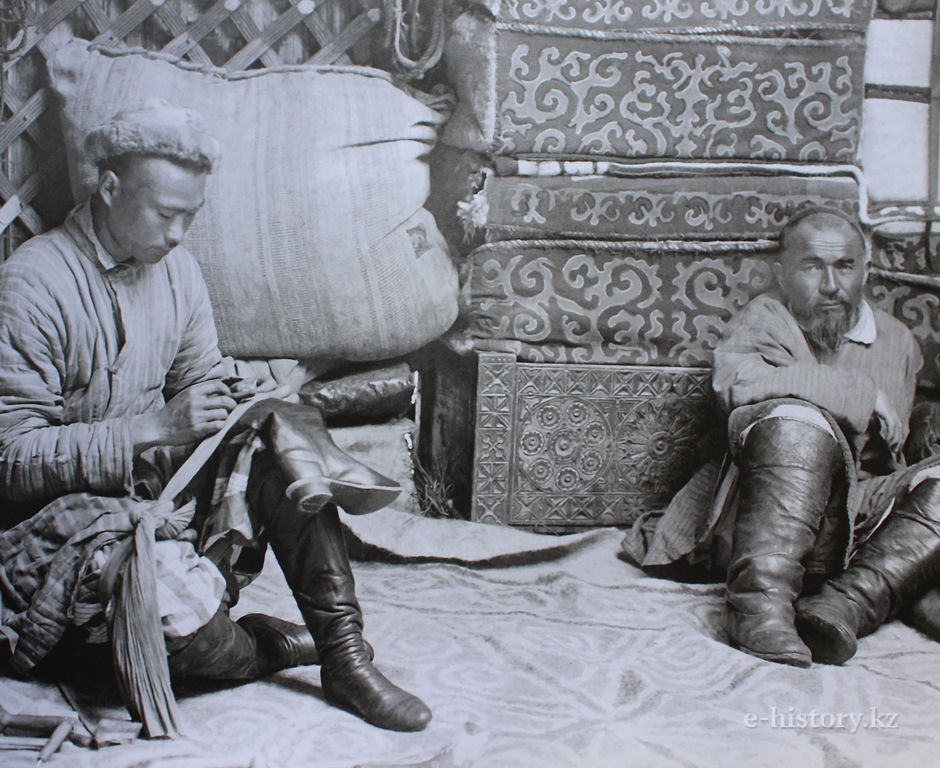 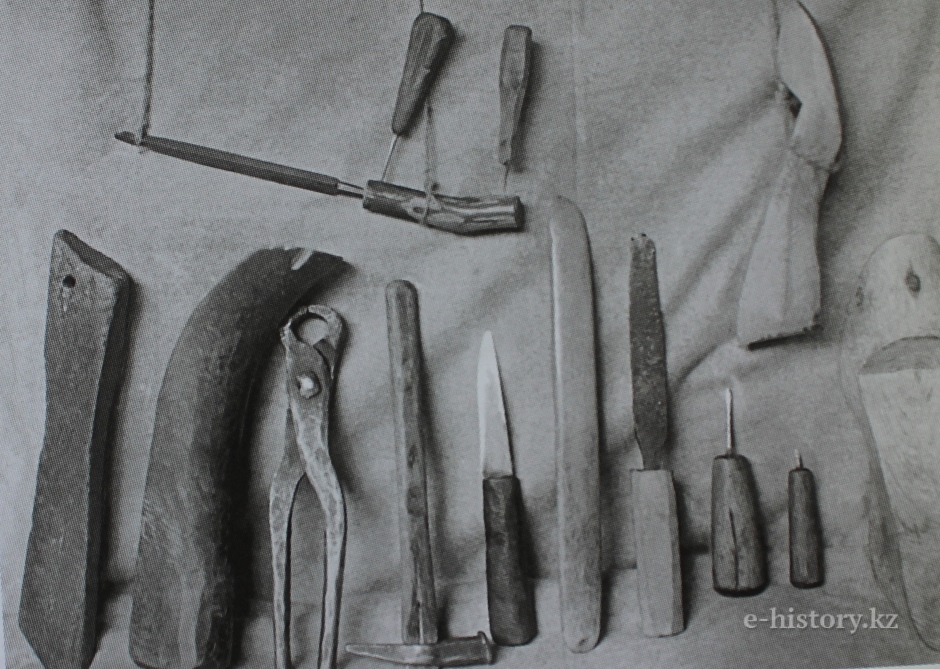 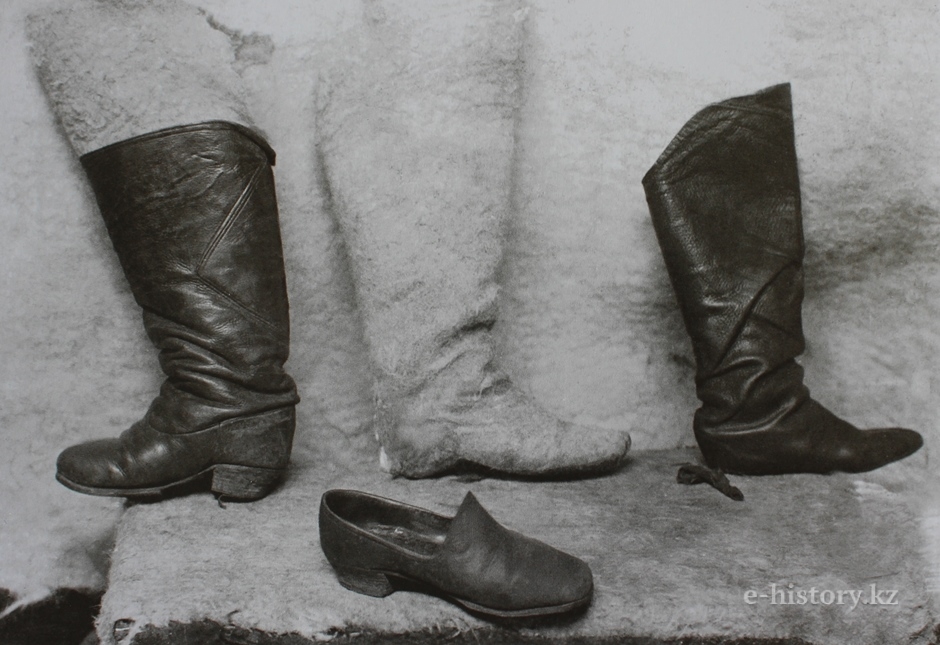 Kazakhs’ items of daily use were numerous leather goods. Each family usually was engaged in fell tanning, derived from animals and hunting. A variety of warm winter clothes: fur hats, fur coats and sheepskin coats were made of the treated fells. The tooling was laid on the leather goods with the help of special male counters. Manufacture of the leather elements of the horse harness: cinch strap, leash, habergeon, crupper, leather saddle and et cetera were of the main importance in terms of the nomadic economy. They made vessels from the leather to carry water and storing of kumys. Shoemaking (etikshilik) craft was closely connected to currying and processing of the leather. Women also took part in the leather industry, although it was mostly in men’s competence. 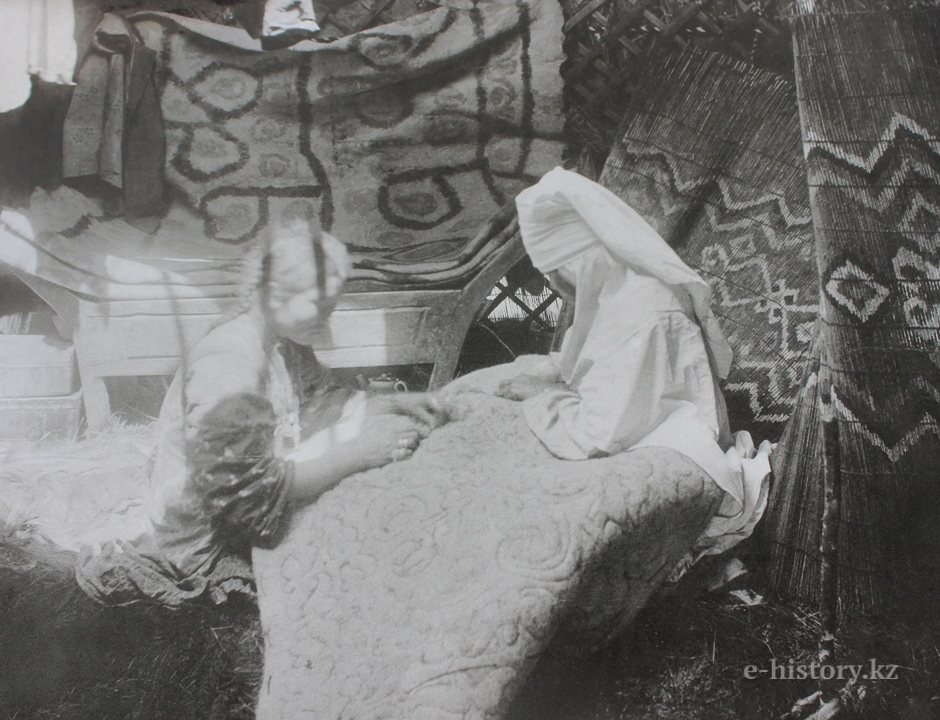 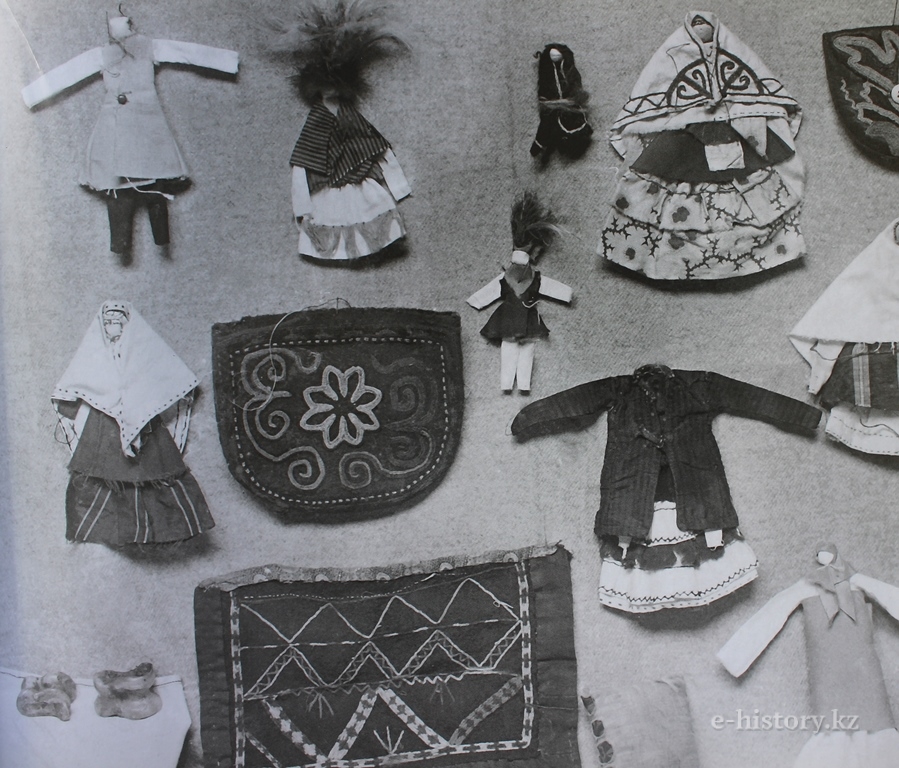 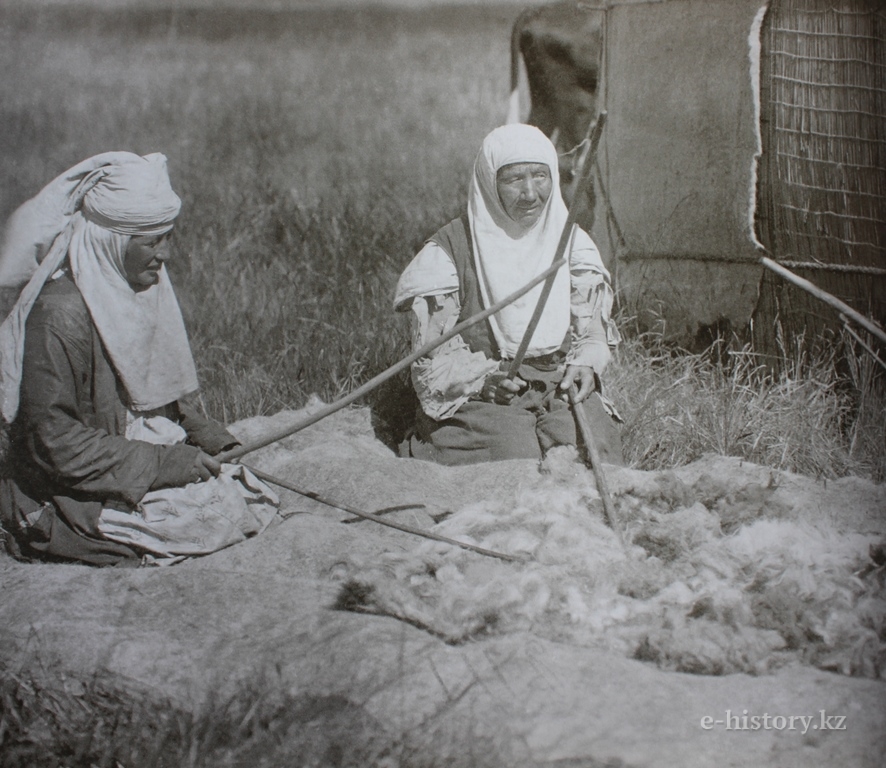 Homemade craft was entirely women’s prerogative. The production of home supplies mostly based on raw materials from the own household — the wool of sheep, camels, fluff and hair of goats, horse hair, leather. The most significant part of home production was manufacture and processing of the felt (kiiz basu), used for various aims, but primarily to cover the yurt and its interior decoration, in particular — ordinary felt pads-kiiz, floor felt carpets — tekemet, quilted floor carpets — syrmak. The entry wall embroider carpets — tuskiiz were unique too, they also were sewn onto felt base. 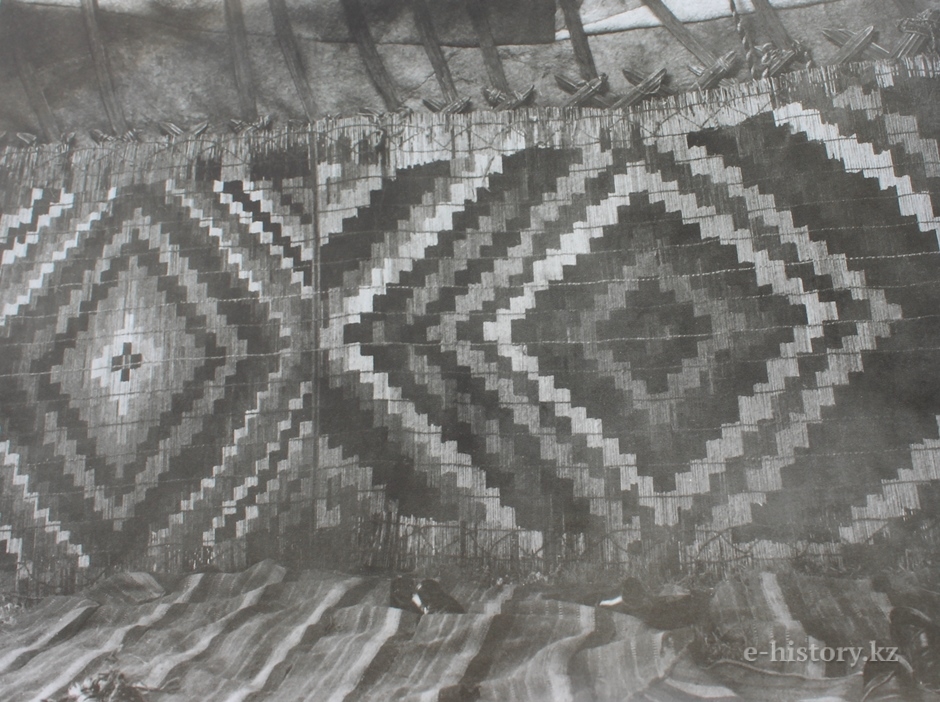 The products of weaving also saw heavy use in the yurt. The veiny ribbons were fastened to the frame of the yurt, which tied the bases of the dome poles around the perimeter of the yurt and were made on the weaver looms in all regions of Kazakhstan. Production of the carpets were made in many regions too — lint-free carpets were manufactures as well as fluff one. The most common type of the carpets was alasha, made of woven strips, which was laid on the floor and was hung on the yurt’s kerege. 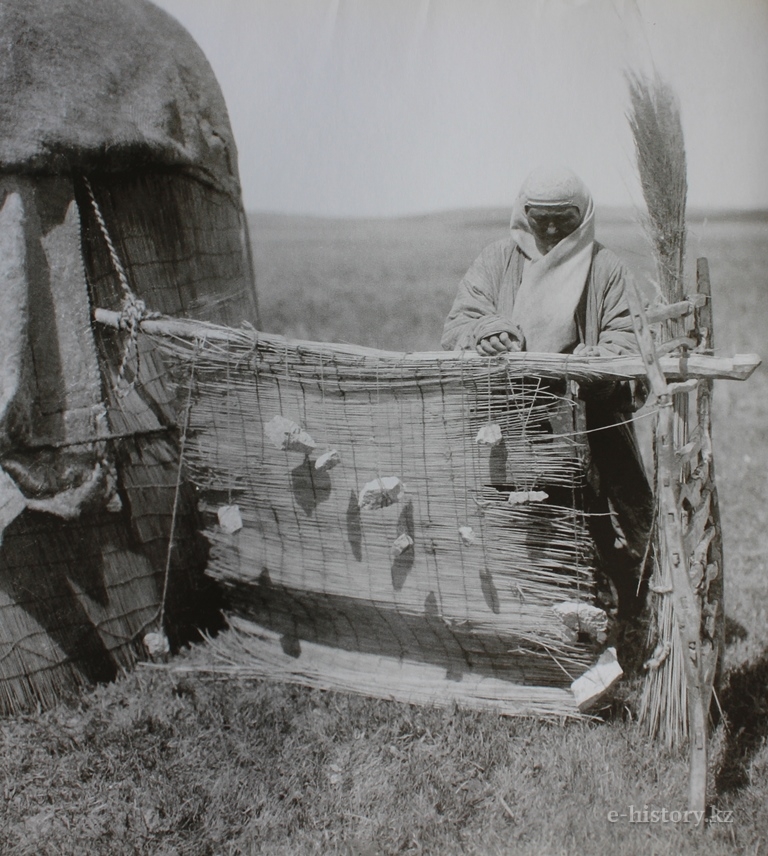 Floor mat waving is also relates to the ancient craft (shi toku), they were manufactured from the stems of steppe reed- Chee grass. Embroidery (keste) was not so developed in Kazakhstan, as in south regions of Central Asia, but was very important in traditional activities of Kazakh women. The elements of clothes were embroidered with floral ornaments: sleeves, collars, hems of dresses, hats, towels, bedspreads and wall hangings.