Home Publications Tomyris. The Queen who defeated the Persians

Tomyris. The Queen who defeated the Persians 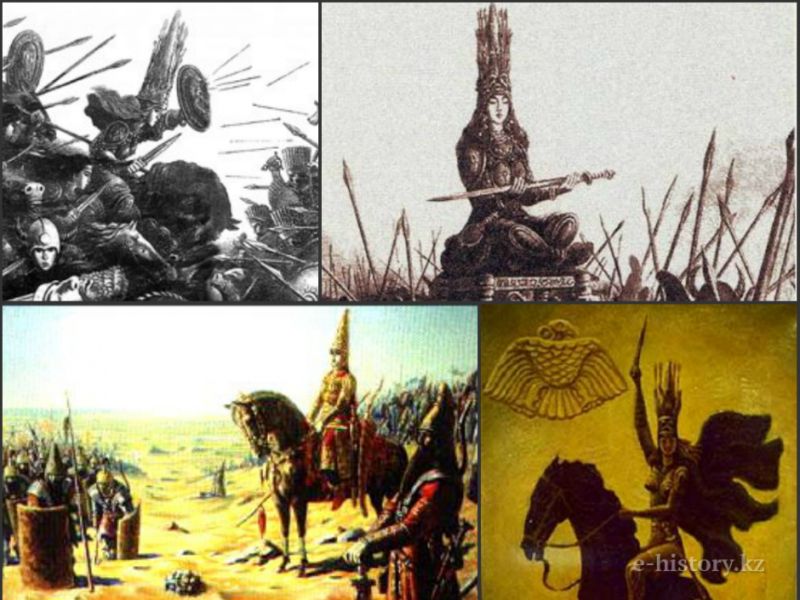 Tomyris was a good strategist and held a considerable amount of authority. After her death, the Scythian state was governed by not one but three kings

3,000 years ago the steppe territories of modern Kazakhstan were inhabited by powerful Scythians, our famous ancestors who amazed the ancient world by their glory. The Greeks called them "centaurs who were born in saddles" and told legends about them. According to Herodotus, an ancient Greek historian, Heracles was the son of a Scythian king.

Nobody could conquer rich lands of the Scythians. Enemies were especially afraid of the Scythian women who fought in wars an equal footing with men. And the strength of their spirit inspired men and terrified invaders.

The Great Steppe has preserved the memory of its heroines, including the best of them — Queen Tymar named Tomyris in ancients chronicles. 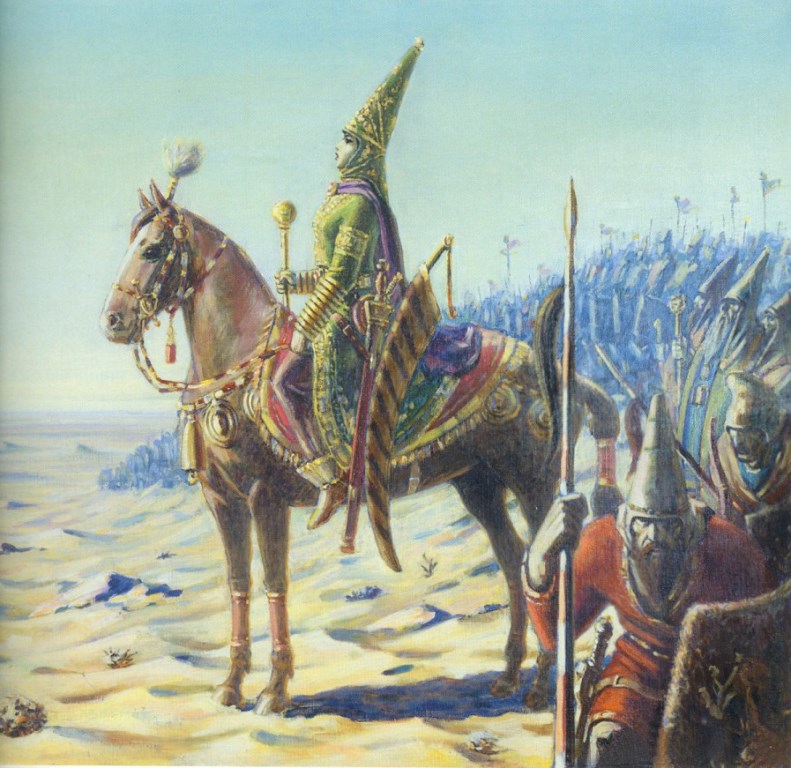 From childhood, she knew chime of weapons and saw military actions. The uncountable number of times she had to flee together with her father. The future queen started riding when she was five years old and preferred the most obstinate horses. At the age of six she tried to fight with a Scythian-type short sword called akinak. Her mother passed away when Tomyris was a baby and her father raised her alone.

Tomyris married Rustam, the son of the ruler of the Scythian tribe Tigraxauda. Rustam was known for his enormous strength. She hesitated long before the marriage ceremony and argued about it much. However, once she saw Rustam’s smile and decided to accept him as a husband. Shortly after the ceremony Tomyris lost her father who was her mentor and friend. Thus, she became the absolute ruler.

Tomyris realised her loneliness after the death of father — her husband spent time feasts and hunting. They drifted further apart. And Tomyris fell in love with her bodyguard Bakhtiyar. Despite her strong love, Bakhtiyar appeared to be a traitor.

In about 530-529 B. C. Cyrus, the ruler of the Median Empire known as the "Ruler of Asia", conquered many countries and moved on the Great Steppe. In one of the battle, he killed Rustam, the husband of Tomyris, and Spargapis, her son. Later Spargapis died in captivity. Then Cyrus sent his ambassador to propose to her and unite the two nations in a one state without any fight. In his message, he noted that felt sorry about her son. Tomyris refused his proposition and vowed to give him enough blood to quench his thirst. 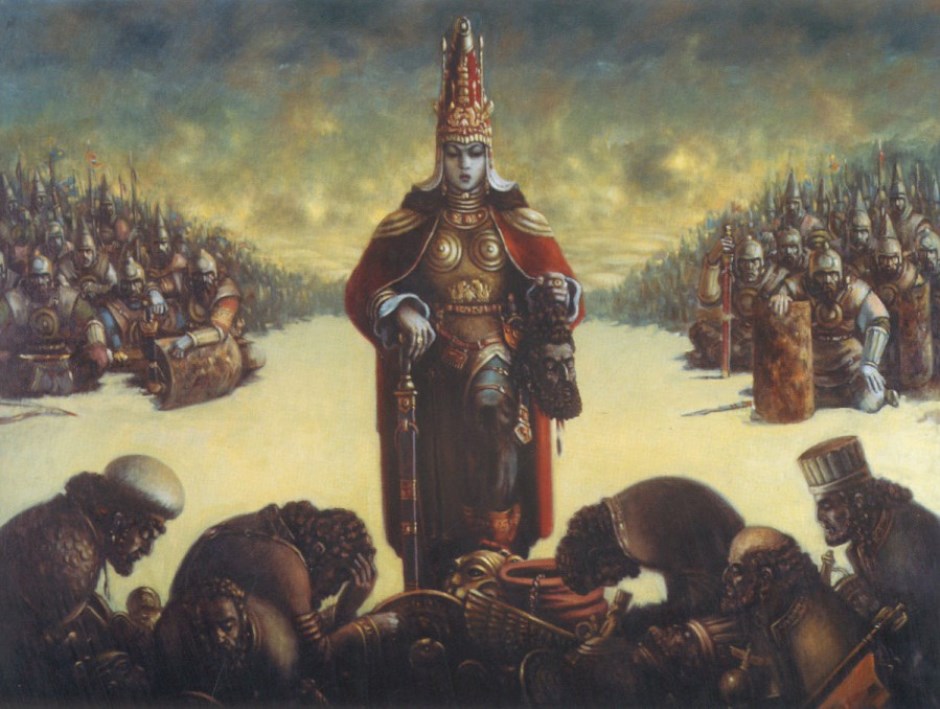 She kept her promise — the Massagetae defeated the Persians. Scythian women participated in the decisive battle with Cyrus. Herodotus called this battle "the cruellest and greatest". The Persians lost as they didn’t expect to see brave women on the battlefield. According to Herodotus, all the Persians, including Cyrus, were killed. That was the greatest blow to Persia, and the country lost its military authority among neighbouring states. The Ruler of Asia died.

Because of the treason of Bakhtiyar the Scythians lost many people to win the war. When Tomyris learnt what he did she ordered to strike off his head and collect the blood into a wineskin. She placed the head of Cyrus (she beheaded him without any help) into the wineskin and exclaimed: "You wanted blood, so empty it to the dregs!" 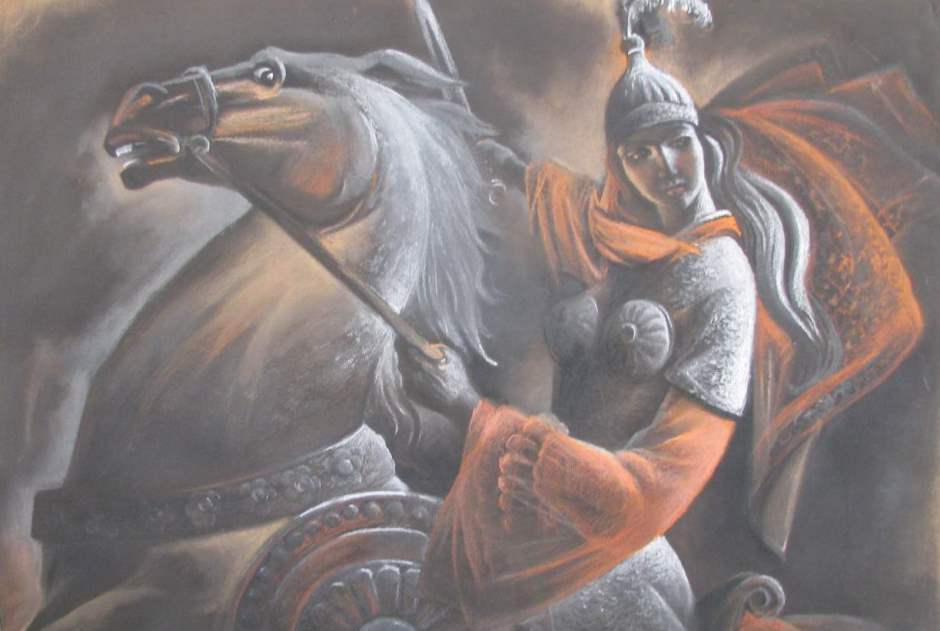 Tomyris was a good strategist and held a considerable amount of authority. After her death, the Scythian state was governed by not one but three kings.

People believe that the Scythian women were ready to do their best to protect the people and remove breast to guarantee effective and comfortable archery.

It’s also noteworthy that an asteroid (590) discovered in 1906 was named after Tomyris.

The name Tomyris is very popular in Kazakhstan. In some written sources, the meaning of it is explained as "smash iron" or "bend iron". Probably, the name is a Greek variation of ancient Iranian name Tomrouz that means "a girl who respects her home."

The example of Tomyris shows us how strong women can be when threats to their families and native country arise.