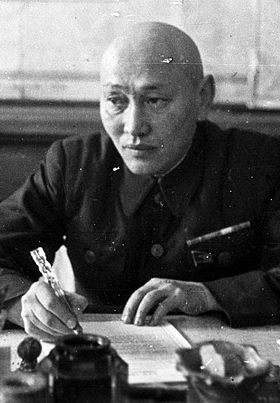 First Secretary of the Communist Party of the Kazakh SSR.

Zhumabay Shayakhmetovich Shayakhmetov, (Russian: Жумабай Шаяхметов), (30 August 1902 – 17 October 1966) was a Kazakh Soviet Communist political figure. From 1946 through 1954, he was First Secretary of the Communist Party of the Kazakh SSR.

He was born to a poor peasant family in a small village in Borisov County (okrug), which in 1924 was incorporated as one of the nine rural areas in the Sherbakulsky District of the Omsk Oblast. In 1915, he went to the two-year Kazakh-Russian school in what is now the Poltava Raion, graduating in 1917. He attended the Narimanov Institute in Moscow, but did not complete his first year. In 1919, he got a job as a school teacher in a rural school, but the school closed due to the civil war and he returned to his home.

From 1919 to 1926, Shayakhmetov was the secretary of the Turkoman Rural District executive committee of the GPU. By 1923, he was already a first-rate agent, solving crimes in the Cherlaksky District, Omsk Oblast. From 1926 to 1928, Shayakhmetov taught office management (official documentation) as the political instructor in a rural organization called "Koschi" in the Petropavl Okrug. From 1928 to 1938, he worked for the NKVD, first as Deputy Department Chief for the North Kazakhstan Oblast, then as the Deputy Department Chief for the Alma Ata Oblast.

From 1938 to 1946, Shayakhmetov worked his way up from Third Secretary to First Secretary of the Central Committee of the Communist Party of the Kazakh SSR. He was the first ethnic Kazakh to hold that post. In March 1954, Shayakhmetov was replaced as First Secretary by Panteleimon Kondratyevich Ponomarenko, a Russian, as part of Khrushchev's post-Stalin reorganization. For about a year, well into 1955, he was the First Secretary of the South Kazakhstan provincial committee of the Communist Party of Kazakhstan, before he was removed from that post as well.