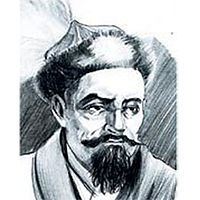 Baluan Sholak was born on 11 December 1864, son of a carpenter, in the village of Karaotkel near the Khan mountains in modern Akmola Province, Kazakhstan, and was named Nurmagambetov. At a young age he lost fingers in an accident when his right hand was burnt, and became known as Baluan Sholak, "Fingerless Fighter". As a boy and young man he demonstrated daring, leadership, agility and extraordinary strength.

He gained fame as a singer of Kazakh songs, promoting the songs of Birzhan Kozhagulova and Achan Seri and composing songs himself. He travelled through Kokshetau, Karaotkel, Bayan-Aul, Irtysh, and Sarysu, staging performances with his troupe of dombra players, singers, storytellers, jockeys and wrestlers. Some of his songs became very popular, including Галия (Galia) and Сентябрь (September). He was also an accomplished dzhigit (skilful horse rider), standing on the back of a galloping horse or riding under the horse's belly. At his performances and at fairs he often demonstrated his strength, athletic ability and fighting prowess. After singing he would remove his colourful costume and lie on the ground, allowing members of his troupe to place a large boulder on his chest and then break the boulder with sledgehammers. On one occasion at the Koyandinsk Fair he battled a well-known fighter named Carona and broke several ribs.

Baluan Sholak remained popular with his countrymen, combining heroic and poetic virtue. He gained a reputation for fighting against injustice and helping the poor and disadvantaged. His songs are still heard today, and the Baluan Sholak Palace of Culture and Sports in Almaty, built in 1967 and seating 5000, is named in his honour.