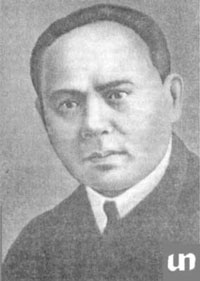 The Party and the Soviet social activist, participant in the struggle for Soviet power in the Seven Rivers. A member of the Communist Party since 1918.

An ethnic Uighur. Before the October Revolution was educated at Verny seminary. In 1925-1927 he studied in Moscow at the Communist University of the Sverdlov, from 1933 - post-graduate courses on Lenin at the CPSU (b), then at the Institute of Nationalities of the USSR Central Executive Committee.

Since May 1917 Rozybakiev was one of the leaders of the "United Union of Muslim workers of the Faithful", participant in the struggle for Soviet power in the Seven Rivers, a member of the Revolutionary Military Committee, Executive Committee and Semirechensk oblvoenrevkoma. In 1918, he was chairman of the Muslim section of Verny Communist-Bolshevik Russian Communist Party (b), a district commissioner and the deputy head of the department at the same time for Nationalities in Semirech'e Regional Committee of the RCP (b) of Turkestan, chairman of the "Revolutionary Union Uighurs" (from 1921 - "Revolutionary Union of Kashgar Dzungarian-workers ", in 1922, was merged with the Union" Koshchi "). During the Revolution and the Civil War, he worked on involving national poor to national military forces. In 1920-1922 he worked as head of the Department of National Minorities of the Central Committee of the RCP (b) of Turkestan, the secretary desk Semirechensk regional party. Since 1922, he served as chairman of the Regional Bureau of the Uighur and Dungan Communists.